On a recent morning, the 2nd-grade students at Spry Elementary in Pilsen take off one shoe and place it in a pile in the middle of a circle, making a motley stack of white sneakers, browning laces and two identical black boots.

Each student takes a turn picking up a shoe, finding the classmate who is wearing its match and then greeting him or her.

This morning ritual, one of the exercises prescribed in the school’s social and emotional learning curriculum, doesn’t always entail removing shoes. But children always share a greeting, ensuring that each of them feels welcomed at school every day.

Teacher Roxanne Guerra-Durazo says that the ritual also helps kids make the transition from home, and whatever troubles they might be facing there, to school.

In fact, the nonprofit group that has been hired by CPS to provide leadership training for the pilot, known as CASEL, was founded by noted author and psychologist Daniel Goleman, who coined the phrase in the title of his best-seller, “Emotional Intelligence: Why It Can Matter More Than IQ.” Goleman also founded the Collaborative for Social, Academic and Emotional Learning (CASEL) which is housed at the University of Illinois at Chicago.

At Spry, three primary grade teachers were trained in the summer of 2006 as part of a previous collaboration with CASEL, which also worked with five other schools across Illinois to implement social and emotional learning. To train teachers, CASEL used a portion of $480,000 in state funding (originally from the federal Safe and Drug-Free Schools program).

Principal Nilda Medina explains that at Spry, many families are among the working poor and cope with a lot of stress. Moms often work long hours and struggle to make ends meet.  Sometimes there are problems with drug addiction and physical distance, with parents living in another country, incarcerated or just absent.

“They come in with many issues,” says Medina, who rose from kindergarten teacher to the top slot at the school last year. “Our families are broken spiritually.”

As a result, children often have no one at home to teach them how to deal with their emotions and respond appropriately to conflicts. And for all the need, Spry is stretched thin to fill the gap. The school has one full-time counselor and a social worker who comes just one and a half days each week—both of whom also have administrative duties.

Medina says that school administrators eventually concluded that addressing students’ emotional needs was a critical first step toward getting them to focus on academics.

All during the school day, there’s evidence of how social and emotional learning is infused with lessons. First-grade teacher Erin Sullivan, for example, uses Guided Discovery (part of the Responsive Classroom curriculum) when she introduces new materials to children.

Today, Sullivan gives children small clumps of gray clay for a class project. But before giving them instructions, Sullivan lets them make objects, like space ships and flowers, and talk to each other about what they’re doing. This approach is meant to let children express their creativity and develop independence, two traits considered important in social and emotional learning.

In Guerra-Durazo’s 2nd-grade class, the greeting is part of what’s called Morning Meeting, which includes conversation and sharing. Since the children are young, most of them share about insignificant happenings. One girl talks about having a dream in which her french fries could talk and lived in a house made of cake.

Though often the stories are silly, Guerra-Durazo says Responsive Classroom has helped her get to know her students better. Sullivan adds that the curriculum has given her a way to deal with some of the challenges students bring.

“Maybe they are not validated at home, or maybe they don’t get a lot of attention,” Sullivan says. “Here, someone will take time to say hello to them, and they will have the chance to share their ideas.”

Medina notes that behavior has improved among the kindergarten, 1st- and 2nd-graders. Although she would love to see the program expand to all the elementary grades and even to Spry High (which is in the same building), the venture is expensive. For now, to avoid the cost of additional training, Medina is thinking of moving the 2nd-grade teachers up to 3rd-grade so they can continue using the curriculum.

The pilot schools, however, will reap the benefit of a school-wide approach. Teachers in every grade will be trained this summer, and feeder schools and high schools will begin using the curriculum at the same time.

All the schools will receive a full-time worker from a social service agency to provide extra mental health services.

“It takes a load off,” says Beryl Guy, principal of Hay Elementary in Austin, who was able to have her mental health worker talk to a boy and his mother when the youth was experiencing some gender-identity issues.

Like many of the elementary schools chosen for the pilot, Hay is already using some of the elements of social and emotional learning.

The day starts with a school assembly, where students say the pledge and bellow out “Lift Every Voice and Sing,” an inspirational song with lyrics written by the African-American poet and civil rights leader James Weldon Johnson. Guy says the assembly is a time for teachers to observe their students and gauge their disposition before the day starts.

Some teachers also lead circle discussions in their classes.

Looking to the future

Guy says most of the strategies that Hay teachers have been using are intuitive, and that many schools with mostly African-American leadership and students take this holistic approach to students.

Next year, Guy says she’s looking to the new curriculum for structure. Eventually, she would like to see more children talking about issues, and to have them develop resiliency, something they will need growing up in a rough city neighborhood.

“One of our mottos is for them to stay on track and keep on moving in the right direction,” Guy says. “We don’t want them to let their problems stop them in the trenches.”

Hay’s team and other teams in the pilot schools are now choosing the curriculum they will use. CASEL rates dozens of curricula on criteria such as overall effectiveness and what type of environment is the best fit.

At Clemente High, for example, special education teacher Janett Young says that her school is leaning toward a curriculum that seems a good fit for teens, called Lions Quest. The team likes the fact that Lions Quest is organized around themes, has a service-learning component and has higher-level lessons and language tailored for the upper grades. Young notes this is important for teens, who abhor being talked down to.

Clemente was approached by CPS to be part of the project after one of its feeder schools, Von Humboldt, pursued it. Young says counselors and teachers needed some selling at first, but now are excited about the pilot.

The team chose a word to emphasize to students: courage. The word seemed appropriate for Clemente because the school has experienced a fair share of violence in recent years.

“They need courage to not follow their peers, and to stay calm in conflicts,” Young says. “We hope they internalize the word.” 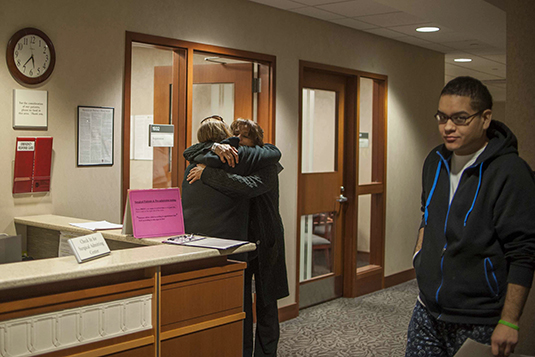 Lopez and her sister Norma hug before heading into surgery.