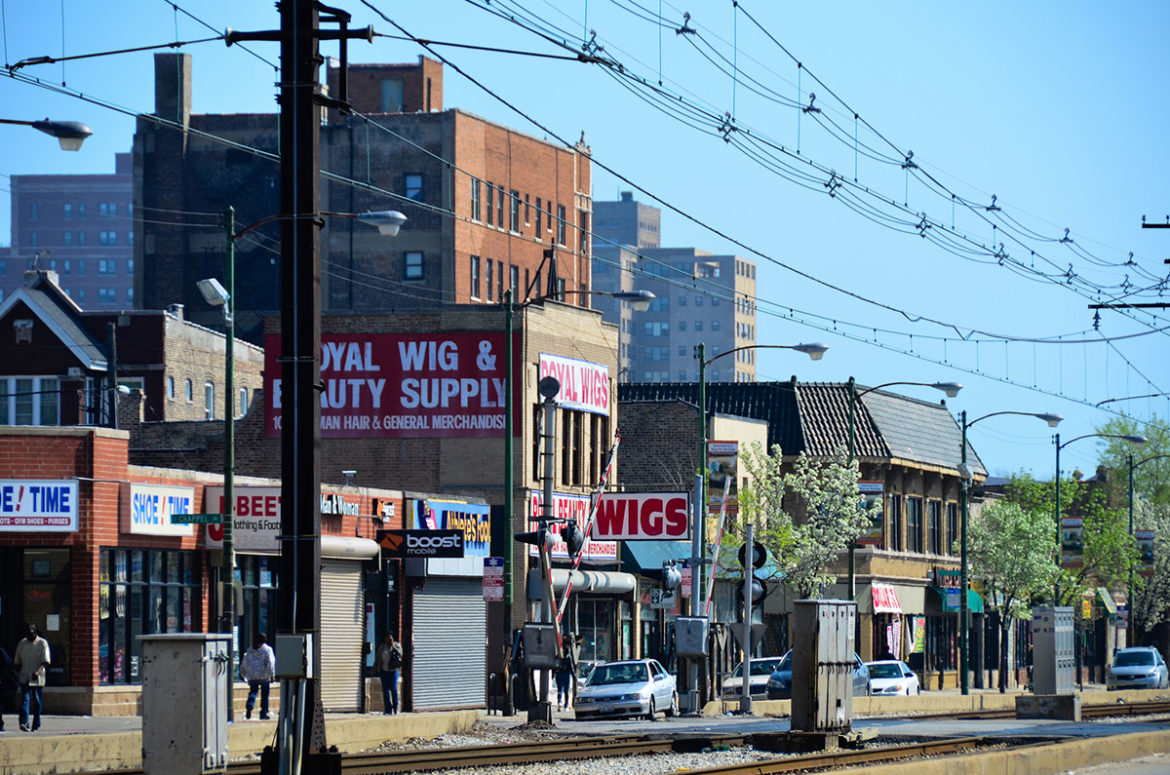 The 71st Street business corridor runs through the South Shore neighborhood, which makes up part of the 7th Ward.

Rev. Scott Onque has pastored St. Luke Missionary Baptist Church in the South Shore neighborhood for 14 years. And in that time, he has watched five aldermen head the 7th ward — the most in any of the city’s Black wards.

Ald. William Beavers helmed the ward for more than two decades before he was elected to the Cook County Board of Commissioners in 2006 and handed the keys to the kingdom to his daughter, Darcel. But their political dynasty didn’t last long. Darcel was only in office a few months before being ousted by Sandi Jackson, wife of then-U.S. Rep. Jesse Jackson Jr. in the 2007 municipal election.

Sandi Jackson’s reign ended midway through her second term when she became ensnared in the  political woes of her husband Jesse Jackson Jr. She resigned in 2013 and the couple later plead guilty to federal charges of misusing campaign funds. Mayor Rahm Emanuel appointed Natashia Holmes to fill the remainder of Jackson’s term. Two years later, Holmes lost that seat to the ward’s current Ald. Greg Mitchell. He faces two challengers, Charles Kyle and community activist Jedidiah Brown, who garnered national attention after rushing the stage at a 2016 Trump campaign rally in Chicago that activists shut down.

While there is no average term length for an alderman, there are outliers like Ald. Ed Burke who has served for 51 years and Ald. Pat O’Connor who’s been there equally long, noted Dick Simpson, a University of Illinois at Chicago political science professor and a former alderman. He noted Sandi Jackson could have easily retained that seat if not for her conviction on federal charges.

“Once an alderman wins their first re-election, four years later they tend to stay in power as long as they want. The Black alderman tend to stay a little longer,” he said.

“There is a lot of moving parts to this aldermanic process,” Onque said. “So, I think we might be experiencing some lack of funding and lack of projects or lack of influence because we have had a quite a bit of turnover in that position. Every time we have a new individual down in City Hall they have less influence when it comes to projects. You get more economic development the more seasoned you are.”

His assessment isn’t off the mark. The ward, which included parts of South Shore, South Chicago, Calumet Heights and South Deering, has seen its share of challenges. Rampant disinvestment has left the South Shore’s business strips on 71st, 75th, and 79th streets and Exchange Avenue skeletons of their former themselves. And the nearly 500-acre South Works steel site still lays barren after two development prospects — the first anchored by McCaffery Interests and then Emerald Living — fell through. The site has been vacant for 26 years though other large developments in the city such as Lincoln Yards and the 78th, a development on a sliver of land between Roosevelt Road and 16th St. are moving forward.

“We had models built. We had tours going. We had potential developments coming in. Several stores were looking at coming over, restaurants like the Cheesecake Factory and then it just stopped and I don’t know what happened,” Onque said of the South Works site. He believes lack of interest from Sandi Jackson’s predecessors may have played in a role, but the area, he noted, needs an economic shot in the arm.

Concerns about economic development topped the agenda at a 7th Ward candidates forum early this month held at Onque’s church. Kyle and Brown attended the event. Mitchell, citing scheduling conflicts, was a no-show.

But when reached by phone Mitchell echoed Onque’s concerns. The ward’s instability, he said,  has affected economic growth. The ward, he said, hasn’t had alderman stick around long enough to create a comprehensive strategic plan or to carry projects through complex zoning, financing and the city’s approval process.

“Every time you turn over an alderman everything goes out the door,” Mitchell said. “Nothing was carried over to me that anybody was potentially working on so I started from zero.”

New businesses have opened or expanded in the ward thanks to economic initiatives like the Retail Thrive Zone and the Neighborhood Opportunity, Mitchell said. He has used these initiatives as well as tax increment financing (TIF) funds to attract businesses. But he noted challenges in the ward with loitering, crime and income factor into whether retailers and developers set up shop here.

“All that helps determine how profitable they can be,” Mitchell said.

Back at the candidates forum, Kyle noted that these economic initiatives are helpful but can be burdensome. He noted it took two years for a coffee shop to open after getting a grant from Neighborhood Opportunity Fund  because of red tape associated with the program.

He wants businesses to work with local chambers of commerce and the ward office to get resources they need. To do that, Kyle said he would draft an ordinance to set aside 20 percent of TIF funds to help small businesses open and grow capacity. It’s small businesses like a sorely needed grocery, he said, that need TIF dollars not corporations, like Amazon and Boeing.

“When you look at 75th Street corridor, it is blighted from Yates to the lake. When you look at our Exchange corridor [from] 71st to 79th it is completely blank,” Kyle said. “I would make sure we are taking TIF money and use that money for what it is actually meant to do which is to build our business corridors.”

Brown and Kyle agreed on other key issues: bringing more resources for neighborhood nonprofits, establishing better lines of communications between the ward office and constituents, lifting the ban on rent control, as well as instituting participatory budgeting and better police relations with residents.

They are also agreed on a community benefits agreement. That’s crucial now since two key developments will occur on the ward’s borders: the Obama Presidential Center and the PGA golf course designed by Tiger Woods. The projects have raised concerns among residents about displacement, rising property values and possible gentrification.

“We can’t stop it from coming [but] we need to have safeguards in place to protect the community that already lives here. We need to make sure that we have people in 60649 working at this golf course,” Kyle said.

Brown noted there needs to be more transparency from elected officials about projects coming to the ward and their potential impact. Without that, he said, residents become “bullied” into accepting a project and cannot effectively organize to demand a community benefits agreement.

Mitchell agrees with a CBA in theory, but says there’s a better tool to hold developers’ accountable when they get city dollars. He said developers seeking TIF dollars or tax incentives must sign a redevelopment agreement which is a legal binding document. Many “asks” community residents want in a CBA like jobs for residents, affordable housing or  hiring Black contractors would be written into that redevelopment agreement, Mitchell said.

“Those are the things I am going to make sure would be in the redevelopment agreement,” he said.

“Whoever the alderman is they have a great opportunity to really position the 7th ward as a place where businesses can come  and thrive,” he said.