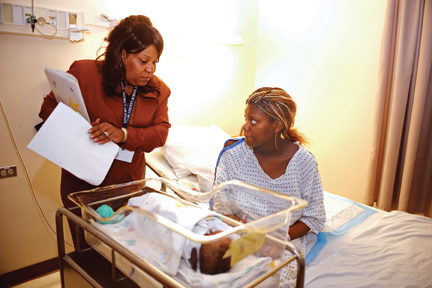 Three years ago, Marquita Booker stood outside her home in the Edward Willis Homes, a predominantly black housing development in south suburban Robbins. A petite, young white woman walked up and asked her: “How old are your children?”

Booker eyed her suspiciously. Her son, 3-year-old Jaquari, was at her side, and baby Jaylin, almost 1, in her arms. She thought, “Who are you to be asking me about my children?”

The young woman, Julie Anderson, then told Booker about the advantages of early learning and encouraged her to enroll Jaquari in preschool. Anderson was a social worker from Blue Island School District 130’s Horace Mann preschool, just next to the Willis Homes.

Booker was indifferent. But Anderson kept showing up at her home, and eventually, Booker got so used to seeing her that she allowed Anderson to read to the boys and bring books to them. After a time, she enrolled Jaquari, then Jaylin when he was older, at Mann’s preschool.

The strategy Anderson used to draw in Booker—showing up at her door and building a relationship with her—is the hallmark of District 130’s preschool program. The district draws children from Blue Island, Alsip, Crestwood and Robbins, communities that include a mix of poor and working-class black and Latino families. Research has shown that children from lower-income and minority families benefit most from preschool. But these children are often more difficult to serve, in part because families simply have never learned about the importance of early education.

Preschool teacher Catherine Stanton reached out to Booker, too. When Jaquari began to miss school—Booker says sometimes she just didn’t feel like getting up to take him—Stanton talked to her about the importance of school attendance and also encouraged Booker to come to parent meetings.

Anderson also continued to support the family. When Jaylin developed a medical condition that required multiple tests and trips to the doctor, Booker had no way to take him, so Anderson became the family’s chauffeur. Anderson also persuaded Booker to get her GED and a medical assistant certificate.

“If it hadn’t been for Horace Mann and the people there,” says Booker, her eyes filling with tears, “I would not have gone to school. I would not have done the things I needed to do for my sons. I would be stuck in the same place.”

Indeed, one top state official points to District 130 as a model for serving hard-to-reach families, with intensive outreach, connection to outside resources, and creation of programs that benefit parents as well as children.

“They have done an exceptional job,” says Kay Henderson, who oversees early childhood programs for the Illinois State Board of Education. “I send people there all the time. I tell them, ‘If you are interested in visiting an exemplary program, the program there is the gold standard.’” Henderson is also a member of the Illinois Early Learning Council, an advisory group for the state’s Preschool for All initiative.

In the early 1990s, District 130’s preschool had 120 spaces, but only half the seats were filled. Today, all of its 440 seats, plus 35 additional spaces for children needing special education services, are filled.

The groundwork for District 130’s strategy was laid with the arrival of Principal Carol Crum at Mann 15 years ago, when the new preschool was having trouble attracting families.
“People were not familiar with who we were,” says Stanton. Former District 130 Superintendent Barbara Mackey adds that other factors were also at play.

“Pre-kindergarten was not the phenomenon it is today,” says Mackey, who left the district in 2003. “Many families, especially those in lower socio-economic groups, had not even thought about accessing these kinds of programs. And in some cultures, especially Latino families, moms are protective and are hesitant to send their children to ‘institutions’ when they are babies.”

Mann’s staff realized that they needed to get the word out, especially to two areas nearby: the Willis Homes to the south, and a trailer park of mostly Latino families to the north. They envisioned a hard sell: Families in each area lived in poverty and were likely to be focused on day-to-day survival, such as finding jobs and putting food on the table.

In the Latino community, language also would be a barrier. And in both communities, families were likely to be wary of strangers showing up at their door.

Yet Crum had learned the value of canvassing door-to-door in the 1980s when she used that tactic to recruit families for a literacy initiative. Crum also knew that it was important to help the entire family. So the message at every contact became “We are more than a school. We are your community resource. We are here to support you.”

If that meant helping families to access social services, then that’s what the school would do. If families needed an advocate to speak on their behalf and go to bat for them with an agency or institution, they’d do that, too.

“We told parents, ‘We are here to serve you,’ ” says Leticia Garcia, a 17-year veteran preschool teacher. “Whatever your problem is, we will find a solution, even if the problem is getting the heat that was turned off, turned back on.” Her Spanish skills paid off, and she also broke the ice by talking to Latino families about her experience working in rural Mexico.

For several weeks, Crum and her staff hit the streets. They went to laundromats, grocery stores, churches and fast-food chains with flyers. They also went door-to-door.

“People got curious,” Crum adds, referring to Anderson’s forays into the Willis development. “They knew she was from the school.  They wanted to know why she was there.”

Intense outreach is not typical of most preschools, says Henderson. “But that’s what it takes sometimes,” she says.

Among the ancillary programs District 130 offers is the federally funded Even Start Family Literacy Program, in which Latino moms gather for English-as-a-second-language classes while their children attend preschool. This year, the district lost the federal funds and paid for the program itself.

Mann also offers Families First, a state-funded program that teaches mothers of children up to age 3 how to foster their children’s social and emotional development. Teachers read stories to the children, sing songs with them and teach them lessons through play and games, modeling activities that mothers can duplicate at home.

“I learned how to use simple, inexpensive things like Cheerios and a string to build my children’s motor skills,” says Nicole Starks, who attends the program once a week with 2-year-old son Michael.

Last year, “Mingling Mondays” debuted, giving parents the opportunity to talk about a variety of issues, from finding a job to concerns about their children. Speakers are brought in to talk with parents about how to help their children read or prepare them for kindergarten.

One February morning, Diane Saxon-Carter, a parent educator, makes the rounds at Metro South Medical Center. She stops in to talk to 17-year-old Porshe Harris, who gave birth to Perry, her first child, just the day before.

The visit is part of District 130’s continued outreach, in which staff visit new mothers at the hospital and talk to them about early learning. The goal is to find mothers who live in the district and are eligible to enroll in Families First.

Harris, it turns out, lives in Chicago. Nevertheless, Saxon-Carter offers her some tips.
“Don’t forget to touch him and talk to him,” she tells Harris. “Do that a lot. And don’t forget to read to him. You can do that now. Remember, you are his first teacher.”

Finding staff that have the skills and desire to go the extra mile, as Saxon-Carter did this day, is crucial, Crum says. She looks for people with a background in social work and counseling and experience canvassing neighborhoods. Recently, Crum hired someone who speaks Arabic to reach an increasing pool of families from the Middle East.

More importantly, Crum says, she looks for people who believe in the importance of building relationships and parent involvement.

“They can be great people, but if they don’t come with a sense and a belief that you have to work with families, here may not be a match,” Crum explains. “I ask a lot of ‘What do you do if?’ questions. And it’s a gut thing. You can pick up on when a person is genuine.”

Crum’s principles are grounded in the work of Ruby Payne, a former high school teacher who developed a controversial program for working with children from poor families; and James Comer, a professor of child psychiatry at Yale University who developed the Comer School Development Program. The Comer program emphasizes building bridges between schools and families. Payne’s program stresses relationships too, although it espouses the belief that poor families have a different set of core beliefs than middle-class families, and that poor children need to be taught differently.

“I know Ruby Payne is controversial, but her belief in the importance of building relationships is what I take away from that,” says Crum.

Word about Mann now spreads by word-of-mouth, and families are more likely to show up on their own to enroll their children. Still, every summer, the staff hits the streets like pied pipers to make sure that no child has been missed.

The mindset has taken hold with Booker, who says her next-door neighbor has young children who are old enough to be in preschool. Booker says she found herself channeling Anderson and giving the young mother a spiel about early education.

“I told her she should have that child in school,” Booker says. “Now she’s not speaking to me because I said something to her. I think I’ll sic Julie on her. She’s pretty persistent.”