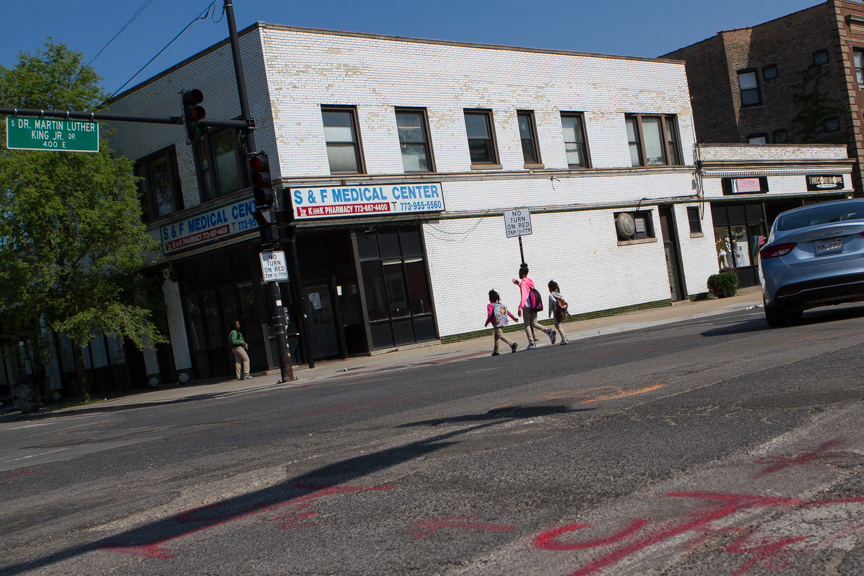 Children cross the street near a potential site for the Obama Presidential Center in Washington Park.

Plans for President Obama’s  library and museum on the South Side and other big-ticket proposals in Chicago have intensified local conversations about community benefits agreements – a tool for residents to gain economic and other benefits from development projects.

Community benefits agreements, or CBAs, are being used around the country, especially in low-income and communities of color in major cities. Residents are often excluded in the decision-making process when developers eye their neighborhoods for projects, said Ben Beach, legal director for Partnership for Working Families, which has helped dozens of groups across the nation craft these agreements. CBAs make developers and elected officials accountable for promises made, especially when public subsidies are involved.

Here are five examples of strong community benefits agreements, according to Beach: Construction on the Consol Energy Center in Pittsburgh, Pa.

Hill District, Pittsburgh — In 2008, the One Hill Coalition, representing some 100 community groups, unions, churches, local businesses and residents in this African-American neighborhood, brokered the city’s first CBA with the developers and operators of the Pittsburgh Penguins. In exchange for supporting a new arena for the hockey team, the agreement provided $8.3 million in neighborhood improvements and set benchmarks for local hiring, livable wages and protections for workers to organize. The agreement also called for the development of a grocery store and youth center.

Oakland Army Base — In 2012, Revive Oakland!, a coalition of 30 organizations including residents, nonprofits, businesses and labor, created a jobs policy for the formerly abandoned base, which had been converted for $800 million into a high-tech trade and logistic complex. The agreement secured livable wages for all workers, required that 50 percent of construction and permanent jobs be filled by Oakland residents and that the ex-offenders be eligible for employment. And for the time in the nation, the agreement restricted the use of temp agencies.

Staples Center, Los Angeles — In 2001, a coalition of residents, labor groups and 30 different community organizations brokered a CBA for an entertainment district adjacent to the Staples Center, home of the Los Angeles Lakers basketball team. The agreement called for 20 percent affordable housing, $1 million for park improvements and recreational facilities and living wages for 70 percent of the jobs created by the development. The Kingsbridge Armory is located in the Bronx neighborhood of New York City.

Kingsbridge Armory, New York City — In 2013, the Kingsbridge Armory Redevelopment Alliance, a coalition of several Bronx community groups, signed an agreement with the developer for the Kingsbridge National Ice Center, which planned to convert a former military armory into a hockey sports complex. The CBA guaranteed living wages, assigned 51 percent of non-construction jobs to local workers and established a developer-funded scholarship for residents to learn to install and maintain the developer’s geothermal and solar power systems.

Bayview Hunter’s Point, San Francisco — In 2008, residents of the mostly minority and working-class community with support from labor and housing groups crafted an agreement with the developer who wanted to convert an abandoned naval shipyard into a mixed-used residential and research/business office complex. The agreement set aside 32 percent of housing units as affordable, provided down payment assistance for housing and $8.5 million in job training for neighborhood residents.