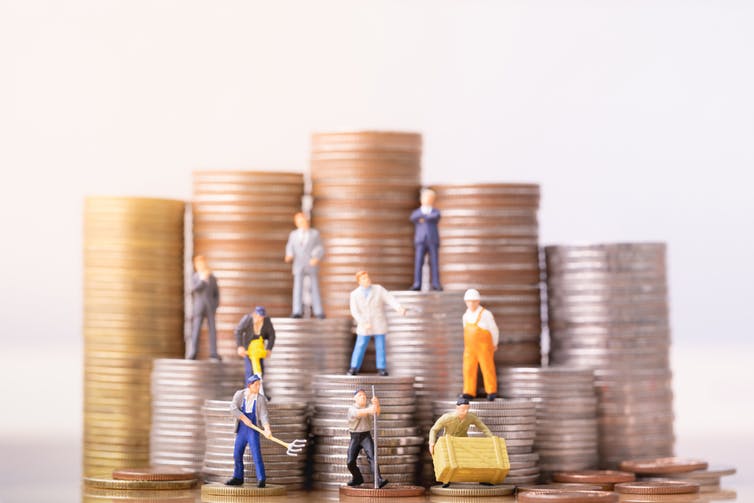 The U.S. economy likely surpassed an important milestone last month: Americans are now experiencing the longest economic expansion in the nation’s history, assuming the data still being collected bears this out.

This is certainly good news and something to celebrate. But, as an economist who focuses on income inequality, I believe it’s important to look deeper into the data to see who really has gained from this record economy.

Economic growth represents two things – how much more the U.S. economy produces from one year to the next and how much more income Americans have relative to the previous year.

These are two sides of the same coin. When items get produced and sold, businesses and ultimately workers receive income. In theory, economic growth should represent a higher standard of living for Americans.

Unfortunately, economic growth during the current expansion has neither been deep nor broadly distributed among most Americans.

The economy grew an average of just 2.3% a year since the expansion began in June 2009, at the end of the Great Recession. That’s almost half the 4.3% average growth rate of the 10 previous economic expansions since World War II.

More troublesome is the fact that the record economic growth has not been broadly shared.

Economic growth figures summarize what is happening overall and on average. But averages can be deceptive. If Bill Gates walks into a soup kitchen, average incomes will suddenly far exceed US$1 million. But this figure poorly describes the economic condition of those eating there.

To gauge the breadth of our economic expansion, we need to look at how its economic gains have been distributed. Over the past decade, 60% of all income gains have gone to the top 1%, roughly those making more than $500,000 a year. Income gains for everyone else has been less than 5%, or under 1% per year.

The narrowness of the current economic expansion can be seen by focusing in on two occupations: secondary school teachers and CEOs at companies in the Standard & Poor’s 500.

Teachers make average salaries despite having significantly above average education levels. Since the current economic recovery began, inflation-adjusted salaries of secondary school teachers declined slightly to $64,340 in 2018, down about 0.3%.

In sharp contrast, median pay including non-salary compensation for the top CEOs in the U.S. jumped an inflation-adjusted 65% since 2009 to a record $12.4 million in 2018.

Flat wages and rising CEO pay help explain why the ratio of CEO pay to median wages at the largest 350 companies by sales has soared from 200 to 271 times average worker wages during the present economic recovery.

3. Where the wealth went

What is true of income is also true of wealth.

Wealth is distributed even more unequally than income and has grown worse during the current economic expansion. While all income groups have experienced gains since 2009, the biggest beneficiaries of the economic expansion by far have been the very richest families.

One main reason for this is that the rich have a large share of their wealth in financial assets, such as stock shares, which have nearly doubled in price since their peak before the Great Recession.

In contrast, middle-income households have most of their wealth tied up in their home.

While home prices have gone up a lot in big cities on the coasts, average home prices are up only 13% since their pre-Great Recession peak in 2006 – that’s less than the inflation rate over the same period. What’s more, many families are still living in homes with little or no equity.

Of course, financial metrics aren’t the only ones worth looking at to see who benefited from a growing economy.

Life expectancy and fertility rates have been falling in recent years, particularly among those at the bottom of the income and wealth distribution.

And more young adults are living with their parents and delaying marriage.

These are things that normally happen during economic recessions and depressions.

One positive trend during the current economic expansion has been the gains for workers in low-wage occupations. However, these gains have not occurred because of the economic expansion. Rather, they are the result of policy choices made by legislators in dozens of states such as California, Colorado and New Jersey and cities such as New York and Seattle that raised their minimum wages in the face of national inability to do so.

Ideally, everyone gains equally from an economic expansion, regardless of its length. And gains need to be broad and deep because expansions do not last forever.

Overall, a well-performing economy should be one where most families take two steps forward during expansions and one step back during recessions. But that’s not America’s reality today.

Steven Pressman is professor of economics at Colorado State University, in Fort Collins, Colorado and Emeritus Professor of Economics and Finance at Monmouth University in West Long Branch, New Jersey. His main research areas are poverty and income distribution, post-Keynesian macroeconomics, and the history of economic thought.