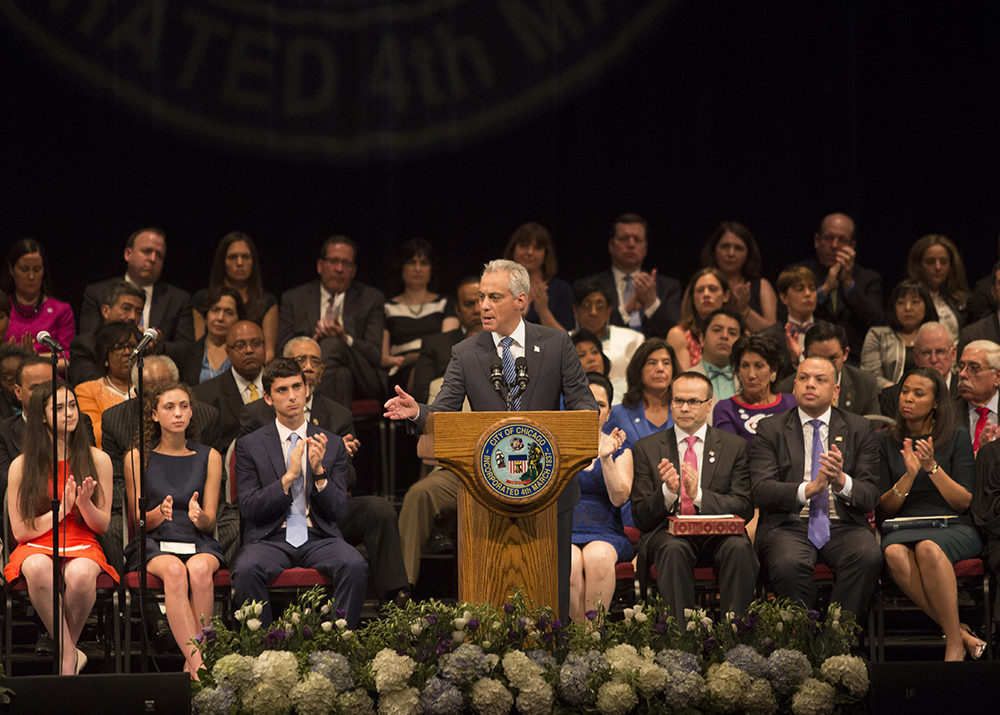 Mayor Rahm Emanuel speaks about saving Chicago's youth at his inauguration this week.

On Wednesday, two days after Mayor Rahm Emanuel called for “preventing another lost generation of our city’s youth” in his inaugural address, young activists with the group We Charge Genocide met to mark the one-year anniversary of the death of Dominique Franklin. The 23-year-old died after being tased by Chicago police following a shoplifting incident.

Perhaps the first step in saving youth is to stop killing them.

Following Franklin’s killing, WCG compiled a report alleging human rights violations by the Chicago Police Department, charging “disproportionate and systemic patterns of state violence against Chicago’s youth of color,” which they presented to a U.N. committee in November.

Based on the testimony of dozens of young people, the report documents accusations of excessive and deadly force and sexual violence by police, along with “an ongoing pattern of routine, invasive and degrading harassment of young people of color.”

It notes that while African-Americans comprise about 33 percent of Chicago’s population, they represent 75 percent of police shooting victims. In the first half of 2014, 23 of 27 people shot by police were black, as were 146 of 186 Taser victims. The report also discusses the “alarming rate of impunity,” with police officers rarely disciplined for misconduct.

“Your school has police officers, and when you leave school, your neighborhood is occupied by police,” said Veronica Morris Moore, an activist with Fearless Leading by the Youth, a Woodlawn group. “And they treat young people even worse than they treat adults.

“I’ve seen young people beaten and brutalized,” Moore said. And she’s been the target of police disrespect, she says; when she was 17 and a passenger in a car that was pulled over, an officer told her, “Get out of the car, bitch.”

That kind of daily harassment and disrespect — along with the knowledge that police are free to deploy violence on a whim, without consequence — is profoundly alienating. If Emanuel wants to provide Chicago youth with “the values, expectations and opportunities that the rest of society and the rest of our city share,” as he says he does, he needs to move to vastly improve police accountability.

Ultimately, to give all our young people a shot at success, we have to counter the economic depression in which many communities are mired — in part by countering policies Emanuel has championed in the past. But short of that, there are a number of areas where concerted leadership could make a big difference.

On a most basic level, Moore argues, saving lives requires establishing a trauma center on the South Side, an ongoing community effort for which “the mayor has done nothing and said nothing,” she said. “He has, in his words, moved heaven and earth so the University of Chicago can get the Obama Library, but he has done nothing to hold the university accountable to the need for trauma care.”

And she adds: “I don’t see how he’s supposed to be saving a lost generation if he’s taking away mental health services,” given statistics showing the large number of young people experiencing trauma in Chicago communities.

A top priority for keeping troubled youth engaged in school should be restorative justice, said Edward Ward, a youth activist with Blocks Together. While CPS has reworked its disciplinary code to shift away from zero-tolerance practices, it hasn’t provided the resources to adequately staff alternative programs that hold students accountable and address issues they are facing in their lives.

And while out-of-school suspensions have decreased, in-school suspensions rose significantly from 2012 to 2014, according to CPS data. And the racial disparity in discipline — with black students disciplined more harshly than others for similar infractions — has not been corrected, the data indicate.

“[High school] students I know are being constantly suspended,” said Ward, who’s now studying political science at DePaul. “When students are not doing well, all [administrators] want to do is discipline them and suspend them.

“That’s not what they need — they need to be listened to. When students who are going through things feel like they have a chance to be heard, their behavior gets so much better.”

Meanwhile, school counselors and social workers are overburdened; in many cases their time is taken up doing case management for special-education students, according to teachers union sources.

On another front, early-childhood education has been shown to reap huge benefits in preparing kids to succeed in school. Emanuel has touted an initiative to provide half-day pre-K to 1,500 children from below-poverty families. That’s financed by social impact bonds, which means half the $35 million program cost will go to private investors.

They’re calling for universal, free pre-K — such as New York City instituted last year — and affordable child care. That would require a major investment, but the payoff would be immense.

Could the city and state step up to the plate? Can we find the money? Is saving our youth a real priority, or just a talking point?

Perhaps we should be talking about a lost generation of political leadership.