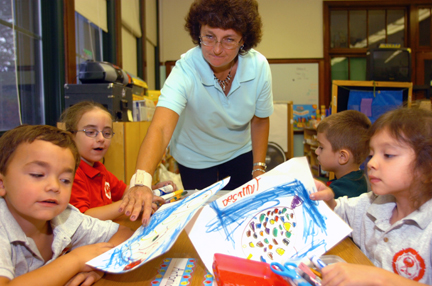 To keep it from closing, she did what several other principals have done to fill seats: She developed a good program for special education students, who, by law, may choose programs outside their neighborhood.

Today, the school has so many neighborhood children that it’s built a mobile home park behind its hulking red brick building, Bushbacker jokes.

Despite the overcrowding—1,264 students in a school built for 800—the school continues to welcome special education students from anywhere, and with 209 of them, it ranks third among the city’s elementary schools. Students have a range of disabilities, with developmentally delayed, which includes many hearing-impaired, and learning-disabled students the largest groups.

A gray-haired, straight-talking woman, Bushbacher says it was an epiphany that set the school’s course. The epiphany came when the leader of a seminar asked a simple but provocative question: When is segregation right?

Deciding it was never right, Bushbacher built a program centered on inclusion. Indeed, staff boast that some special education students are so integrated into regular classes that few other students realize they have special needs. Even students with more profound disabilities may go into a regular classroom once a day to interact with regular students.

“Putting them into the regular classes does wonders for their self-esteem,” said Valerie Granados, the school’s social worker. One child, who is in 7th grade, doesn’t want to be pulled out of the classroom at all, she says. “At that age, no child wants to be different.”

But with No Child Left Behind and the school district’s budget crunch, Bushbacher and her staff are struggling to hold true to their vision. As teacher Idalia Lugo put it: “We have one agenda, they have another.”

Meanwhile, the Chicago Public Schools is cutting aides and teachers. For Lugo, those things don’t jibe.

Reinberg took a hit of three teachers and five aides, cutting the total staff from 50 to 42. Bushbacher was incredulous. Her lips tightening, she notes that the board initially used a formula rather than consider schools’ circumstances.

“These are individual children with a slew of individual needs and problems,” she says.

Bushbacher says that by pressing schools to raise test scores and, at the same time, cutting staff, the board has made clear that it does not consider special education students a priority. “Our children with disabilities do not provide what society wants,” she says.

“CPS cites numbers, but they don’t come into the classroom,” adds Stephen Loftus, special education teacher for the upper grades. “They don’t see what it is like to be in a classroom of 31 students.”

It was the “extra” staff that have made inclusion, also a board goal, possible, says Bushbacher.

She gives an example of a student who has a colostomy bag and needed an aide to change it. With that aide cut, the girl cannot stay in a regular classroom. Instead, she must go to a “self-contained” special education classroom that has an aide.

Bushbacher also is frustrated by the demand that special education students, with some exceptions, pass grade-level standardized tests—even though hers do relatively well. In 2005, a quarter of the school’s special education children took those tests, and about a third of them met standards in reading, compared to about 16 percent districtwide, according to district figures.

Bushbacher shrugs at the results. “Performance on the test is not important for us,” she says. “It is much more important that our students develop life skills.”

The staff at Reinberg say that sometimes special education students make more progress than regular students but that progress cannot always be measured on a test.

Loftus says that what is important to him is improving students’ attitudes toward education. “By the time I get them in 7th and 8th grade, they often don’t have the love for learning,” he says.

For Jacquelyn Dubow, the 3rd-grade special education teacher, achievement is often measured by the way children act and feel. She says the young children she works with know they can’t read.

“Anytime you put a book in front of them, they start [changing] their behavior,” she says. “They start being the class clown, they start acting out. I can’t even begin to teach them how to read until the behavior goes away. So my goal is to not have the [disruptive] behavior.”

Bushbacher adds that sometimes Dubow calls her in to see a child who finally learns to read. “You should see the look on that child’s face.”

“You can’t measure that on a standardized test,” Dubow says.