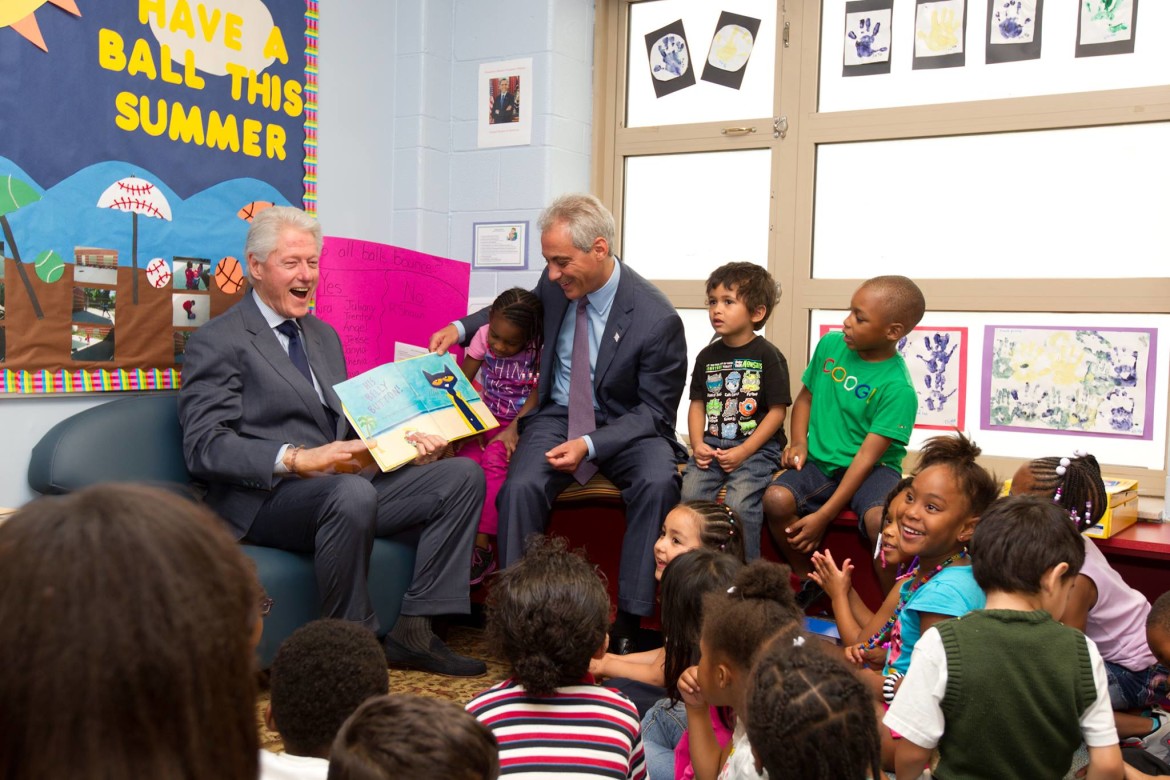 Chicago Mayor Rahm Emanuel and former President Bill Clinton reading to children in June 2014 at the Metropolitan Family Services Learning and Wellness Center that serves the Englewood and Back of the Yards neighborhoods.

Unlike any Chicago mayor before him, Rahm Emanuel has made the expansion of quality early childhood education programs a focal point of his agenda.

He lengthened the official kindergarten school day, centralized the preschool application process, diverted some city revenue to make up for a loss in state and federal funding,  and, earlier this month, announced that the city would borrow millions of dollars through a so-called “social impact bond” to temporarily increase the number of slots in the city’s heralded child-parent centers.

By next year, Emanuel says, the city will be able to offer at least a half-day of preschool to all low-income children.

“If you’re a child of a parent that is basically described as poor, or lower, you will have universal preschool for that 4-year-old,” Emanuel told a room full of bank executives last week. “So when it comes time for kindergarten, we are going to be able to make sure every child in the city of Chicago – not just our children – but every child in the city of Chicago at the age of 4 will have preschool education […]so that when they get to kindergarten and go to those seven-hour days, they are ready.”

More than three years into the mayor’s tenure, advocates for the city’s youngest children say that they’re glad Emanuel has brought increased public attention to the issue. But many – especially working parents and union activists who are pushing for full-day universal preschool – say they’re still on the fence about how much his policies will ultimately expand and broaden access to what’s long been a complex web of early childhood programs.

Cristina Pacione-Zayas, education director for the Latino Policy Forum, says it’s obvious that Emanuel “gets that we have to start early if we’re talking about closing the achievement gap. It’s a lot more in the discourse than it ever has been. But that doesn’t necessarily mean it’s a good thing.”

“We still need to ensure the right folks are at the table so they’re enacting policy from the ground up,” she adds.

Emanuel is no stranger to the world of early learning. At press conferences and education events, he often tells audiences how he studied the subject as an undergraduate student at Sarah Lawrence College before switching his area of concentration. (A spokeswoman for the liberal arts school confirmed that Emanuel studied early childhood education during his first two years, in addition to working at an early childhood center on campus for three semesters.)

Emanuel’s experience, coupled with his later work in politics and as an investment banker, convinced him that early education is a good long-term investment.

“From the evidence I’ve seen, he does care about this and it’s not just because it’s a nice thing to do for kids. I think he believes the research out there […] that for every dollar you invest, you’re going to save $7 later down the road,” says Ric Estrada, president and CEO of Metropolitan Family Services, an organization that provides early education and other services to low-income families in Cook and DuPage counties.

“You have to believe it, because he’s putting his money where his mouth is. He’s expanded programs especially in poor neighborhoods and when there is no money, he’s forced to be creative,” Estrada adds.

As evidence, he points to the social impact bonds, a new financing tool that Emanuel has turned to in order to pay for 2,600 new slots at six CPS child-parent centers over the next four years. In a plan unveiled last week, the city would borrow about $17 million from Goldman Sachs Social Impact Fund, Northern Trust and the JB and MK Pritzker Family Foundation with the understanding it will only pay the money back if it saves on expensive special education services for children later down the road. The city would make additional payments if students reach high achievement levels on kindergarten literacy and third-grade tests.

According to projections presented to the City Council last week, CPS will wind up paying the lenders nearly $21.5 million back by the time the children graduate from high school.* In addition, the city expects to pay about $4.5 million for successful test results.

The mayor’s proposal contrasts drastically with how a coalition of community groups and unions has suggested the city pay for “truly universal” full-day preschool. The groups want the city to go after banks for so-called “toxic swaps,” redistribute money from tax-increment financing districts, or lobby the state to create new revenue from taxes on commuters or luxury services.

“What they’ve done is put a drop in the bucket to deal with the massive demand for preschool services, and not even begin to address the extent to which people desperately need childcare for infants and toddlers,” said Jackson Potter of the Chicago Teachers Union. “Instead of providing those services, we’ll have a much smaller version of that and we’re on the hook for creating a profitable situation for the banks that are financing this.”

Ready to Learn! focuses on the neediest

The mayor’s signature early learning initiative, Ready to Learn!, has sought to redistribute preschool spaces to the areas of the city with the highest needs. Among the changes:

— A centralized bidding process for schools and community-based sites that are applying for state or federal money for preschool slots.

— A centralized enrollment process to try and guarantee that the city’s poorest children get top priority. However, the change has sparked complaints from some parents who could no longer enroll their children directly at their neighborhood school, contributing to a drop in enrollment of nearly 1,000 4-year-olds in school-based preschools.  “If parents can’t get slots available to them in their neighborhood, they might get referred somewhere miles away,” says Brynn Seibert, director of child care and early learning for SEIU Healthcare Illinois, which represents child care workers. “Transportation is a big problem that could obscure some of the access issues.” CPS hasn’t published this year’s enrollment figures yet, so it’s unclear whether the problem remains.

— For those families that do not qualify as low income, CPS began charging for half-day preschool on a sliding scale. District data obtained by SEIU Healthcare Illinois and provided to Catalyst Chicago indicates that about 6 percent of all children in school-based preschools had to pay last year.

Not surprisingly, schools on the North Side, such as Edison Park and Blaine, had the highest percentage of paying students. The money generated from the sliding-scale fees – about $164,000 per month – helps pay for other early education programs in the city.

Adding up the numbers

Over the past several months, Emanuel has used the term “universal” to describe plans to provide a free, half-day preschool to the 25,000 or so 4-year-olds in the city whose families’ incomes would qualify them for free or reduced-cost school lunches. The estimates are based on U.S. Census data, and are similar to last year’s actual figures on the number of kindergartners who qualified for the lunch program.

According to the mayor’s office, about 23,500 low-income 4-year-olds are already being served in city-run early education programs in school- or community site-based slots. (Though city officials have not provided Catalyst with an accounting of that figure, the numbers roughly added up last year when taking into account 4-year-olds in Head Start, Preschool for All and child-parent centers in the city, including Head Start programs administered by other agencies.)

Emanuel’s social impact bond proposal – which could come into fruition by next month – makes a dent at reaching those additional 1,500 children who are now not in any program. Additional slots would apparently be funded with revenue generated from the city’s controversial red-light cameras, as Emanuel has said he’d invest an additional $36 million over three years from those revenues.

Last year, some of those funds went toward start-up costs for new early learning centers, including one that opened in February in the annex of Libby Elementary School in the Englewood neighborhood. Metropolitan Family Services operates the center, which provides early learning and childcare services in addition to a variety of other health, legal aid and workforce programs.

During the press conference earlier this month, Emanuel spoke about how last year’s decision to make all kindergarten classes a full day was critical not just for the children, but for their working parents. (Previously, some schools offered a half-day and others a full-day.)

“No parent, specifically a mother, can get a job if she says, ‘I have to leave at 11 o’clock to pick up my child,” Emanuel said. “If you’re on a two-hour schedule for kindergarten, you’re not only short-changing the child, you’re short-changing the parent.”

Working parents like Hellen Juarez agree wholeheartedly with Emanuel’s assessment. But they say that the situation doesn’t just apply to those with kindergartners.

Juarez is a single mother with three daughters who lives in Brighton Park, which was ranked the neighborhood most in need of childcare and preschool slots by IFF (previously known as the Illinois Facilities Fund). Two of her daughters are in elementary school; the youngest, who is 2, goes to daycare in another neighborhood because Juarez couldn’t find anything nearby. Juarez, a paralegal who is also taking college classes, pays about $700 out of pocket for a full day of care. She says she looks forward to when her youngest daughter is old enough to go to full-day kindergarten.

* This story was updated on Nov. 11, 2014, to reflect more precise figures on the social impact bond cost projections.