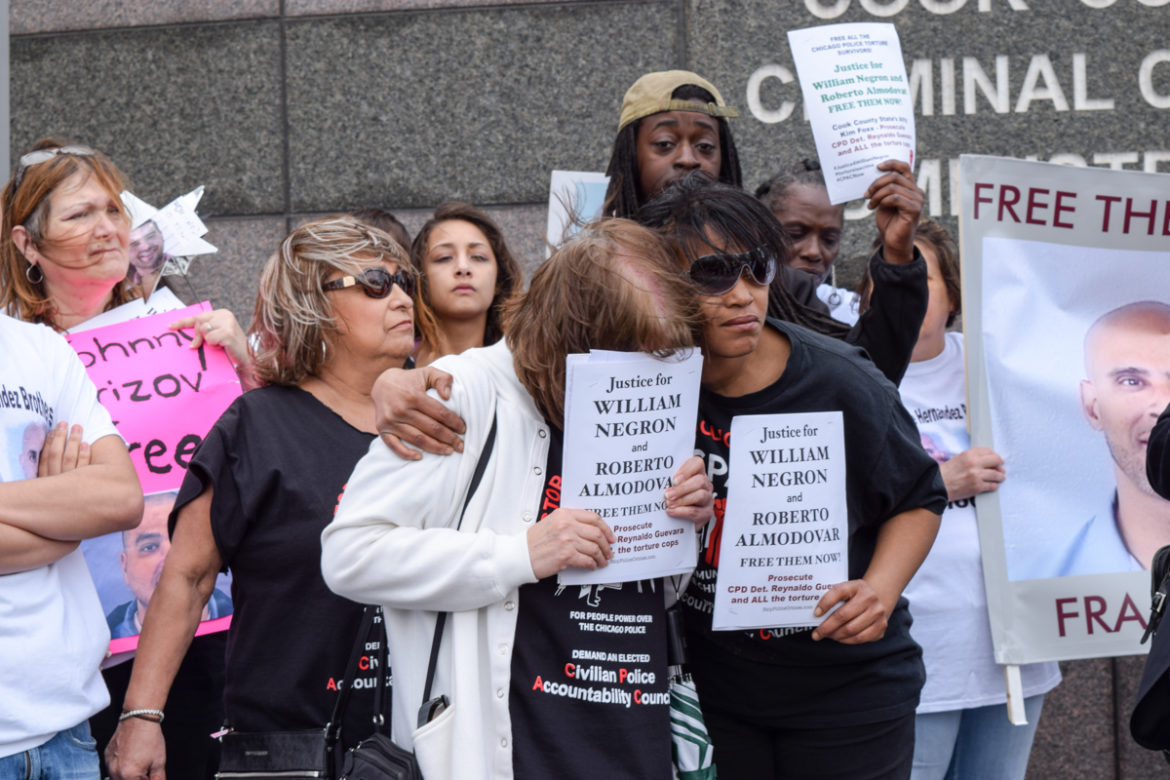 Sara Ortiz, the mother of William Negron, cries at a rally outside the Cook County Criminal Courthouse prior to a hearing in her son and Roberto Almodovar’s case on April 10, 2017. In prison since 1995, Almodovar and Negron are fighting for their murder convictions to be overturned like those of other men who alleged they were framed by former Chicago police Detective Reynaldo Guevara.

“After a thorough and deliberate review of the evidence and arguments presented to the circuit court, the State’s Attorney’s Office has concluded that the evidence presented could change the result of this case on retrial. In light of this decision, we have determined that proceeding with this case is no longer in the best interests of justice and we are withdrawing our opposition to petitioners’ request for a new trial. Based on the totality of the evidence currently available, the office has concluded that it is insufficient to support a retrial of this case.”

With a Cook County judge set to rule on whether to grant a new trial to two men who say they were framed by disgraced Chicago Police Detective Reynaldo Guevara, Kim Foxx now finds herself in the same position as Anita Alvarez, whom she defeated last November based on promises that she would be a different kind of state’s attorney.

If Roberto Almodovar and William Negron win their motion, Foxx will be very hard pressed to mount a successful prosecution.

“Why is the state fighting this motion?” Almodovar’s attorney, Jennifer Bonjean, asked in closing arguments at this week’s hearing on granting a new trial. “Because they know that they can’t win it if there is a retrial.” The judge is set to issue his ruling on April 20.

A review of Guevara-related cases led by former U.S. Attorney Scott Lassar and completed in 2015 found that Almodovar was probably innocent.  Attorneys argue that Negron’s conviction rests upon the exact same set of allegations as Almodovar’s. If one is innocent, both are.

At least four Guevara-linked murder convictions have been overturned in recent years – including two last summer – and dozens more have been challenged, as Buzzfeed reported last week in great detail.

After the Lassar report, Alvarez claimed to open a review of Almodovar and Negron’s case but continued fighting the men’s efforts to win reconsideration of their convictions.  Finally, after repeated motions by lawyers for the two men, the Appellate Court ruled that they deserved a hearing, saying testimony had “cast doubt upon Detective Guevara’s method” of obtaining eyewitness identifications.

During Monday’s hearing, Assistant State’s Attorney Celeste Stack went through a long list of witnesses against Guevara, seeking to discredit them one by one.  She questioned the integrity of the Lassar investigation and of a former detective who testified about how Guevara manipulated an eyewitness in a separate case.  She challenged details of the testimony of a doctor in yet another case, who testified that a witness was unresponsive and days from death at the time Guevara claimed he got an identification out of him.

But for the most part, Stack repeatedly hammered at her point that Guevara’s detractors are gang members who are motivated by the prospect of big lawsuit payoffs. She emphasized that Guevara worked in a violent community in the 1990s, when murder rates were at record highs.  She didn’t mention that was also the period when Chicago earned its reputation as the wrongful conviction capital of the nation.

Bizarrely, Stack addressed the gallery – filled with family members of Guevara’s victims, who have supported each other for years, along with several men whose convictions based on Guevara investigations have been overturned – asking whether they thought she was defending a dirty cop. They did.

Stack’s job will be even harder if she has to go to retrial.  One of two eyewitnesses has recanted his identification of Almodovar and Negron, saying Guevara put him up to it, and Almodovar’s first attorney has testified that the other eyewitness also admitted that Guevara told her whom to identify.  And prosecutors will be unable to take the routine step of calling the lead investigator to testify: Guevara has been taking the Fifth Amendment and refusing to answer questions about his investigations for several years.

Bonjean pointed to 161 questions in a deposition to which Guevara took the Fifth, highlighting this one: “Did you intentionally frame Roberto Almodovar and William Negron for murder?”  Hearing Guevara take the Fifth in response to that would certainly influence a jury’s decision in a retrial, she argued.

Stack was left to argue that while the judge may draw a negative inference from Guevara’s refusal to testify, it’s important to consider the additional evidence.  The problem is, there isn’t much of that.

While she was running for office, Foxx told relatives of Guevara’s victims that “she was going to look at Guevara’s cases,” said Mary Rodriguez, Almodovar’s aunt.  “But that was just a politician talking.”

Foxx has said she is revamping her office’s conviction integrity unit, but so far, she has continued to defend Guevara’s convictions.

It may actually be that the prosecution is worried about money.  Guevara has cost taxpayers over $20 million in lawsuits so far, and several more cases are working their way through the system now.  Politicians may think that if they slow-walk the process now, someone else will be in office when the bill has to be paid.  The problem is that there are almost certainly innocent men in prison now.

“I get that it’s a problem,” Bonjean told me.  “I’m not sure how you solve it except by facing the facts.”