Patricia* leans against a wall and shrugs defiantly as her teacher and principal bustle around, getting ready for the kick-off of a new mentoring program.

Though she was persuaded to return after the school day to Herzl Elementary this Wednesday evening, the 13-year-old wasn’t about to show any enthusiasm.

Patricia flatly says she’s bad and likes to fight, and that nothing will change that.
“I don’t care about no one because no one cares about me,” she says.

The teenager’s pessimistic attitude is understandable. Patricia’s mother, a drug addict, was in prison until she turned 6, the girl says. Although her mother is not in prison now, Patricia says they do not get along and do not live together. She has never lived with her father and barely knows him; he is now behind bars. Patricia lives with an aunt and a 36-year-old cousin.

In her dour assessment, Patricia voices both the reason for the mentoring program called LAMP and the challenges that it faces reaching out to troubled youngsters. LAMP, which stands for Lawndale Amachi Mentoring Program, is the first local chapter of the well-regarded Amachi program started in 2000 in Philadelphia by Rev. Dr. W. Wilson Goode Sr. The faith-based program has won national recognition for its work to bring together mentors with children whose parents are in prison. Almost every state has Amachi programs.

There are no data to show how many schoolchildren in North Lawndale have a parent in prison. But the number of adults in the community who are involved with the criminal justice system is high: As many as 57 percent of the adult population has been arrested, incarcerated or put on probation, according to a 2002 study by the now-defunct, nonprofit Center for Impact Research.

Retired Herzl Principal Betty Allen-Green was inspired to start LAMP after running into the mother of one of her students during a prison ministry visit organized by her church. The encounter showed her how devastating it is for children to have a parent in prison. (See Catalyst Chicago, April 2007.)

“Children love their parents and they want their parents,” Allen-Green told the initial group of mentees and mentors gathered for the mid-March kickoff event at her North Lawndale school. When their parents are in prison, she says, “they come to school angry, or stop coming to school.” They also sometimes stop taking care of their appearance, she adds.

Allen-Green implored the mentors to take the children to the movies or the library, just to let them know that someone out there cares. She put her retirement plans on hold last year, as the local school council searched for a replacement. But she pushed ahead and founded LAMP, garnering financial support from Chase Bank and the Steans Family Foundation. Allen-Green also convinced AmeriCorps to send her a volunteer.

The first matches involved only Herzl students and mentors from nearby Greater Galilee Baptist Church, along with a few school staff mentors. But the ultimate goal is to include children from 13 neighborhood elementary schools and the Collins campus.

At this first meeting, AmeriCorps volunteer Vanessa Ford reads the names of the students and their mentors before they share a meal.

Lawrence Coleman, a church member, says this is his first foray into volunteering. A father of eight adult children, Coleman believes he can be a good male role model for a boy in need.
“I want to give them some idea of what it means to have good character,” he says.

Another goal is to take the children’s minds off their troubles. “My childhood was filled with playing basketball outside,” Coleman says. “I want them just to be children and have fun.”

His youngest daughter, Christina Franklin, was also on hand and was the only one to get two mentees, twins Tina* and Tracy.* Franklin knelt at the table and tried to get to know the two 7-year-olds.

“Jump rope,” Franklin confirms. “Do you know how to jump double-dutch?”

“I’ll teach you,” Franklin tells her.

The two girls are with their grandmother, Cynthia Washington, who has been caring for them and their three siblings for the past two years. Washington declines to give specifics about where her daughter is, except to say that the children can only talk to her by phone and that she keeps her daughter’s picture out so they will remember her.

“I am just keeping them until she can get herself together,” she says. The children’s fathers are not involved in their lives.

Financially, Washington is struggling. The only assistance she receives is a grant of $398 from the Illinois Department of Human Services. “I am doing my best to keep a roof over their heads,” she says.

Washington often feels stretched thin and hopes the children will get some needed extra attention from their mentor.

“I am only one person,” she says. “I give them everything I have, but all I have is love. I don’t see anything wrong with giving them a little more of it from a mentor.”

*Editor’s note: To protect their privacy, Catalyst is not using children’s real names. 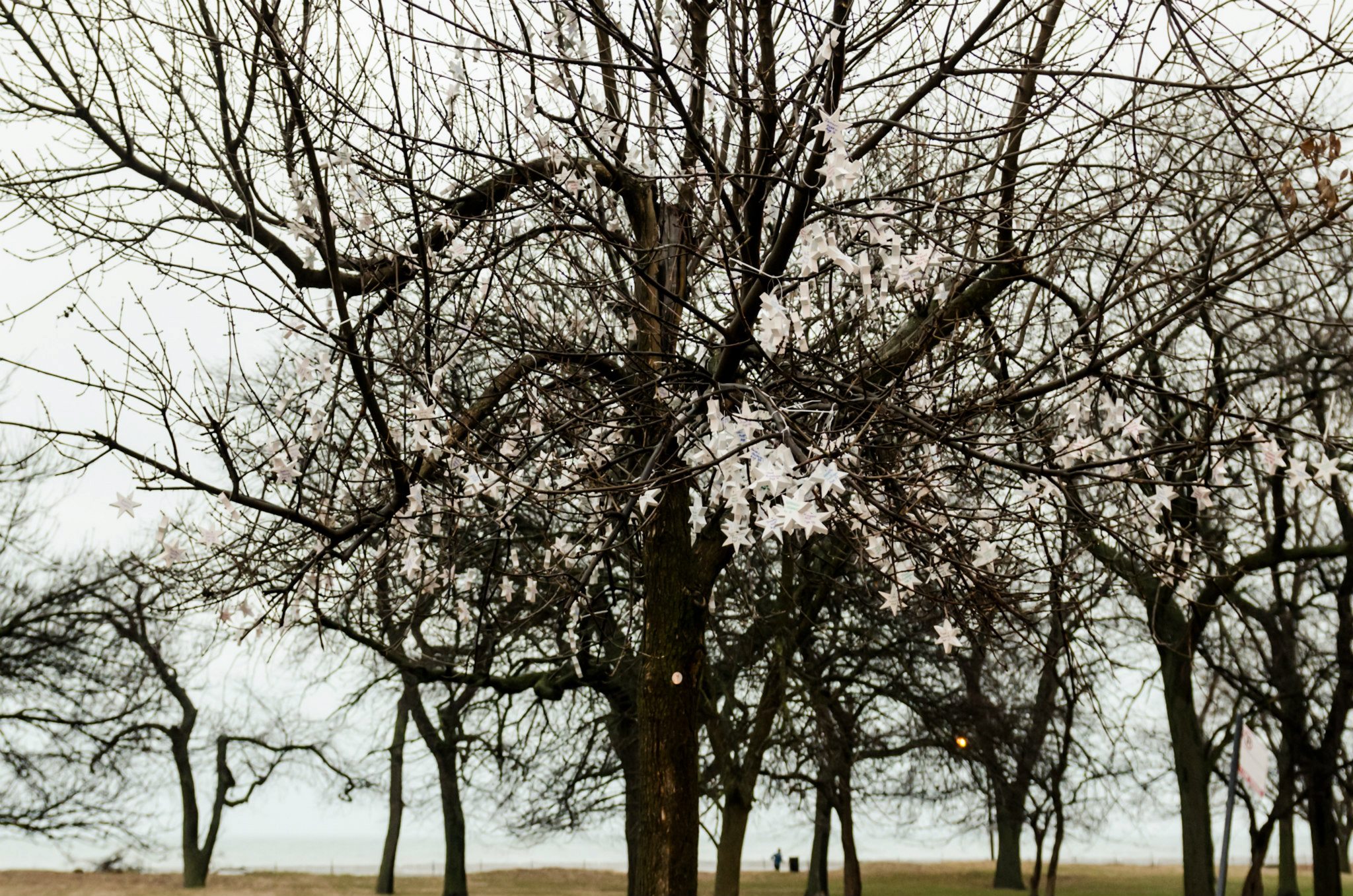 On the day of the December vigil, Occupy Rogers Park hung 499 wooden stars on a tree at the east end of Lunt Avenue by Lake Michigan.