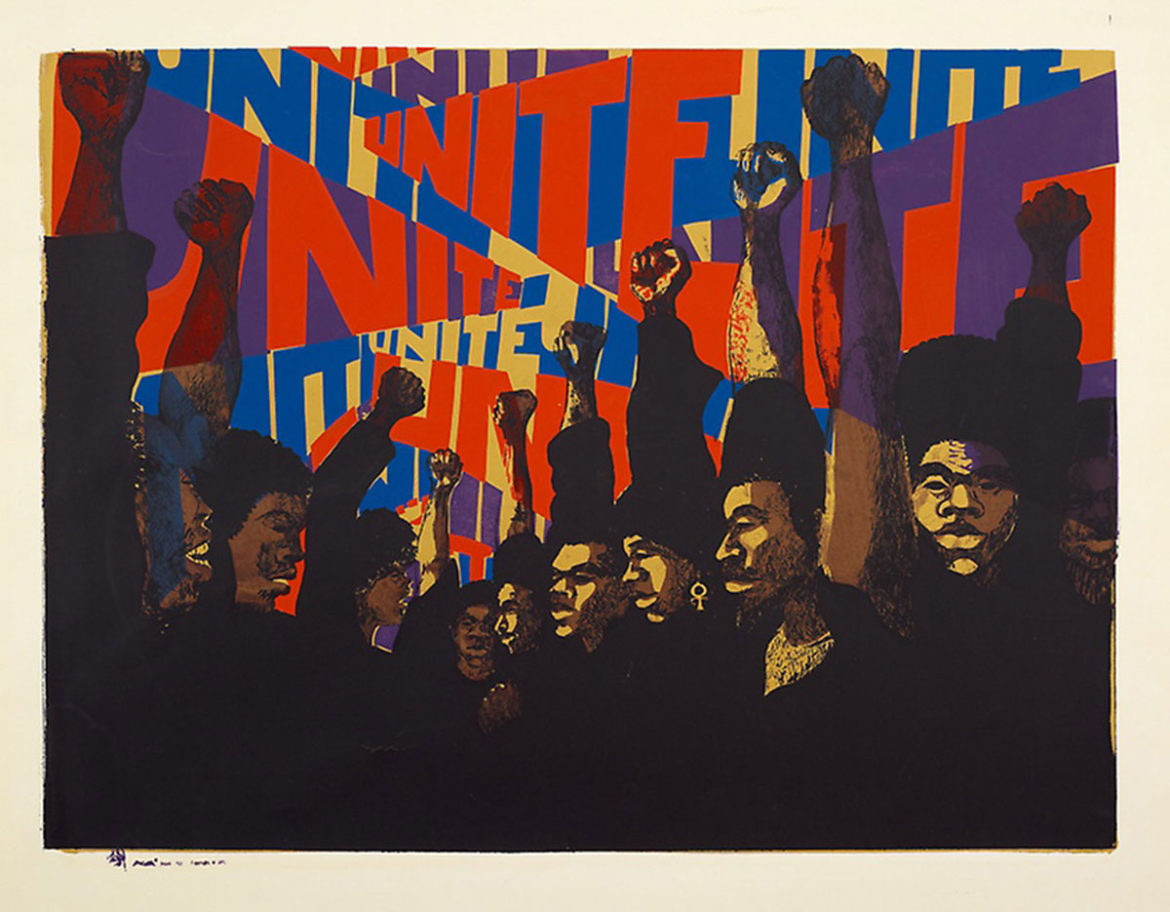 Gift of Judy and Patrick Diamond

The new issue of the Chicago Review focuses on the Black Arts Movement in Chicago, the remarkable flowering of poetry, music, theater and dance reflecting the Black Power movement of the 1960s and ’70s, which produced poets and artists of major significance.

That movement has received a fair amount of attention by historians, including accounts by participants such as Rise of the Phoenix by Useni Eugene Perkins (who the Chicago Tribune called “the most famous poet you’ve never heard of”) and a study of the vastly symbolic and influential 1967 mural, The Wall of Respect, co-edited by scholar and activist Abdul Alkalimat, founding chair of the Organization of Black American Culture.

Its legacy also lives on in a number of African American arts institutions in Chicago.

The new Chicago Review issue unearths creative literary works from the period and presents a range of critical commentary, along with personal accounts from Alkalimat and poets Angela Jackson and Haki Madhubuti, founder of Third World Press, among others.

It includes a memoir by the late Oscar Brown Jr. of his experience working with the Blackstone Rangers in 1967, when he produced and directed “Opportunity, Please Knock,” which is introduced by Brown’s daughters, Maggie and Africa. (Maggie and Africa Brown will perform, and Jackson, Madhubuti, Alkalimat and Sterling Plumpp will read poems at a launch event this Friday at the Stony Island Arts Bank.) And writer Thulani Davis provides a personal perspective to introduce poems by saxophonist Joseph Jarman, of the Art Ensemble of Chicago, who died in January.

Much of the movement’s focus came from OBAC, convened in 1967 by Alkalimat along with poet Conrad Kent Rivers and editor Hoyt W. Fuller. Fuller was a central figure, Alkalimat recalled in a recent conversation, representing an older generation, and particularly as editor of Johnson Publication’s Negro Digest (later renamed Black World), where he “dared to publish new and innovative works.”

In a video presentation of her essay on the web companion to the Review issue, Jackson recalls being invited by Hoyt to join OBAC’s writers workshop; she calls her first meeting “the most important appointment I ever kept with myself.” OBAC “was an organization of revolutionary artists whose goal was the creation of a literature true to the African American experience, without the constraints of white critics or audiences breathing down our necks, asking us to reinvent our experience to suit them.”

According to Jackson, “the poets of the Black Arts Movement understood the relationship between politics and arts. They saw themselves as creating a functional art, as needful to people as food, water and weaponry, serving a purpose that was political.” Movement poets had what one critic has called “frontality,” she said – “words leaping out at the reader in a direct, in-your-face way.” While movement founders were generally male, many of the most prominent poets to emerge from it were women, she said. Carolyn Rodgers, a protégé of Gwendolyn Brooks, who is also featured in the new issue, was one example of this.

Today “the commodification of art and everything in life is so, so profound,” and for artists and activists alike, grant writing has become the main source of sustenance, [Alkalimat] said. “That means being subjected to a certain kind of control and operating within a certain value system.”

Jackson recalls the excitement of the time – crowds spilling onto the street from OBAC’s storefront when national figures like Amiri Baraka or Sonia Sanchez gave readings.

“The black power movement unleashed a tremendous energy from below,” Alkalimat said. He described OBAC’s aesthetic as “black experientialism,” which involved “rooting what we were doing in the actual experience of black people in the community,” rather than some intellectualization or sanitization of it.

Fuller was a key proponent of this approach, but for Alkalimat, the poet Amus Mor embodied it. In an essay introducing a selection of Mor’s poems in the Review, Alkalimat calls him “the poet laureate of the Black Arts Movement in Chicago.” He told me, “I learned a lot from him.”

Mor was “a rogue proletarian artist” of exceptional talent who read widely and honed his craft diligently, according to Alkalimat. He was considered “the most electrifying performer of poetry of the period,” often featured in concerts by the Association for the Advancement of Creative Musicians. He read his “Poem to the Hip Generation” at OBAC’s first public program and “turned the people out,” Alikalimat said. Amiri Baraka, considered the leading light of the Black Arts Movement nationally, has said that poem “inspired a whole generation.”

The struggling poet published very little during his lifetime – Alikalimat used part of a student grant to publish Mor’s The Coming of John, comprised of two long poems dedicated to saxophonist John Coltrane, part of which is included in the Chicago Review, and Mor’s poems were included in a few anthologies. Alikalimat is now looking for support to publish a collection of Mor’s work with critical commentary. (You can hear the exuberance and musicality of Mur reading a version of the Hip Generation poem on a 1972 album; he offers a more somber performance on an early recording by AACM founder Muhal Richard Abrams.)

What relevance might this history hold for artists and activists today? One lesson could be in the Black Arts Movement’s “reinvention of the public” and “decommodification of art,” with murals, street theater, musicians producing their own concerts and poets selling their own publications on the street, according to Alkalimat.  OBAC’s Wall of Respect in 1967 launched a nationwide mural movement. “The initial thrust of everything came organically from the community,” he said. “It was self-organizing. It was a concrete demonstration of self-determination.”

Today “the commodification of art and everything in life is so, so profound,” and for artists and activists alike, grant writing has become the main source of sustenance, he said. “That means being subjected to a certain kind of control and operating within a certain value system,” he said. Meanwhile, popular music often celebrates the accumulation and display of wealth.

“We need to expose people to the possibility of self-determination, of being organically connected to the community,” he said. “We’ve got to figure out a way to make that an option.”