Last year, Kenny Rainey was saying goodbye to high school. He had too few credits to graduate and was nervous about his future, but he had a summer job lined up and plans to enroll in an alternative school to earn his diploma.

But now, Kenny is in Cook County Jail’s boot camp, where he was sentenced for possessing an illegal firearm. Two days before he was shipped to the camp, he appeared much thinner than he had been a year ago, and looked pale in the fluorescent light of a jail visiting room.

Kenny’s story—leaving school and swiftly landing behind bars—is yet another example of the “school-to-prison pipeline.” Lawyers and civil rights activists point out that school arrests and high numbers of suspensions and expulsions are the hallmarks of this phenomenon.

For some young people, the path from school to incarceration is direct. For others, like Kenny, the link is indirect, says Jim Freeman, director of the Schoolhouse to Jailhouse Track at the Advancement Project, a Washington D.C.-based advocacy organization.

Kenny was never arrested at school. But during his freshman and sophomore years at Dyett High in Washington Park, he was suspended multiple times. (Kenny is one of three young African-American men profiled in the May/June 2009 issue of Catalyst In Depth .)

Research has shown that a student suspended just once is three times more likely to dropout of school. And dropouts, especially young black men, are overrepresented in jail.

“Once outside the structure of school, the expected life outcomes are far more grim,” Freeman says.

This reality is vividly apparent at the boot camp, a one-year program that consists of 18 weeks of intensive military training and 8 months of supervision after release. Men between the ages of 17 and 35 are eligible to be sentenced to the camp for their first or second non-violent offense. Yet the average age of inmates is 22.

On weekday mornings, the inmates start the day by walking in unison around the concrete yard. A few men appear to be in their late 20s or 30s. But for the most part, the group is made up of baby-faced black and Latino men who look barely outside of their teens.

High school is still a recent memory for many of the inmates, including Kenny. But only about a third of the young men have earned a high school diploma. Between 12 and 16 percent read below a 6th-grade level, and so are placed in a remedial literacy class. For these young men, officials admit, the prospect of earning a GED is dim.
On the night Kenny was arrested, he was leaving a basketball game at Dyett. Though he was no longer a student at the time, Kenny still had friends there and says he was drawn to the place.

As they crossed 51st Street, some guys started shooting at Kenny and his friend, Walt. Walt was hit. Kenny returned fire.

“I heard the sirens and thought it was the ambulance, but it was actually the police,” he recalls. “I had a gun in my hand.”

At the time, Kenny wanted to hit the guys he was shooting at. But now, Kenny says he’s glad he didn’t. Walt recovered from his wounds, and Kenny knows that if his bullet had hit someone, the consequences would have been much worse than boot camp. “I would be in [prison] for murder.”  Kenny is hard-pressed to make any connection between his arrest and his school experience. He isn’t one to blame others for his situation, but one thing he says is that a different school environment might have served him better.

“There was a lot of fighting to get into, and I was angry,” he says.

As a 14-year-old coming into high school, Kenny had a lot to be mad about.

The son of a crack addict, Kenny was taken into state custody at age 5. He stayed with one foster mother for seven years, but was removed from her home when she couldn’t pay the light bill. He then went to a foster mother who lived close to Dyett.

Kenny admits that he was upset and headstrong when he went to live with that foster mother and enrolled at Dyett. He wanted to do his own thing, and fought a lot. According to Kenny, his foster mother didn’t cut him much slack, and regardless of the weather outside, refused to let him in the house during the many times he was suspended.

Two mentors who came to Dyett during his junior year worked hard to settle Kenny down, and it dawned on him that school was the most stable place in his life. Still, after four years, he had only earned 10 credits, less than half of what he needed to graduate.

Whether boot camp will be the second chance that Kenny so desperately needs remains in question, although the odds show a glimmer of hope. Only about a third of boot-camp inmates return to jail within three years of their incarceration, well below the 51 percent recidivism rate of the Illinois Department of Corrections.

Around the corner from Cook County Jail, the boot camp is a quiet, orderly place. In one building, some of the inmates sit in classes, neatly dressed in thin, light blue button-up shirts and nylon, navy blue slacks.

Others work in the camp’s farm, watering vegetables, moving soil and looking for weeds to pick. Their faces, arms and shoulders seem relaxed, divorced from the tough attitude most of them would adopt if they were out walking the streets of their home neighborhoods.

Frank Johnson, the head of boot camp programs, points out that looking to the southwest of the farm one can see the maximum security jail. It is a reminder of where the young men could be, or might end up.

Many inmates experience an epiphany in boot camp: They realize that the camp provides an opportunity—maybe their last one—to get their lives together.

John Harrington, executive director of the boot camp, says young men choose the camp option because they are given a shorter sentence and are less likely to be moved to a prison far from their family. The hardest thing for inmates is not the physical demands, though running and doing pushups can be difficult for the young men, who often aren’t in good physical shape.

Instead, Harrington says, adapting to the camp’s stringent regulations is the hardest part of boot camp.

“Ninety-nine percent [of inmates] have never encountered strict discipline,” he says. Acting out even in small ways, like wandering around the barracks when an inmate is supposed to be confined to his bed, can lead to physical punishment, like pushups or squats until exhaustion.

The young men also are forced to go to school every day, and to be alert and engaged while there. “We take it (education) and shove it right down their throat,” Harrington says.

Jim Edmonson, who teaches math at the boot camp school, says initially he was surprised at the young men’s low academic levels. Edmondson came in thinking he would start class by going over 9th-grade math (typically beginning algebra). Instead, he spends a lot of time drilling students on the basics of multiplication and division.

Edmonson says sometimes the young guys resist his efforts. “The older guys want a job and feel like they want to get out of that [gang] lifestyle,” he says. “They are tired of being locked up. Sometimes the younger guys are still caught up.”

Before going to boot camp, Kenny said he was determined for his first experience behind bars to be his last.

He calls Cook County Jail the worst place in the world, a place where he spent his days, before going to boot camp, staring at the television. “I don’t like to be told what to do,” he said, noting that jail is not the place for headstrong people who have trouble with authority.

He expected boot camp would be better, if only because he will be doing physical activity. “I just have to get through the first two weeks of being yelled at,” he said.

Once out, Kenny wants to find a job and a boxing program to participate in. He figures that if there is one thing he knows how to do, it is fight.

He plans to move in with his father in South Holland. It’s the same plan he had last year, a plan that never panned out.

And he’s trying to take the advice his father gave him during a visit. “He just said to me, ‘Don’t let this define you.’ I am going to try to take this as a life lesson and move on.” 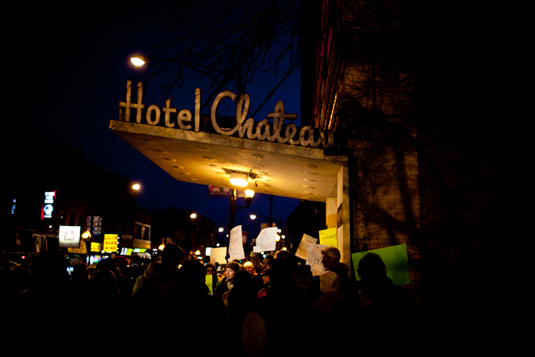 Protestors gathered for a press conference to demand that action be taken to protect current residents from possible homelessness. Photo by Jonathan Gibby