Dino Masciopinto, 18, sits at the window overlooking Division Street at El Rescate, a transitional-housing program in Humboldt Park on Chicago's West Side that serves LGBTQ and HIV-positive Latino youths. [Photo by Michelle Kanaar]

As a youth, Dino Masciopinto faced challenges that many adults can’t handle.

Masciopinto also was his family’s chief financial support. “I’m the youngest in the house and I was pretty much the only one that worked, and basically my whole paycheck went to them, and it still wasn’t enough.”

The young man worked a lot of jobs and, basically, raised himself, he says. His finances, sexuality and a family crisis put him on a path that would eventually leave him homeless.  “I had to grow up at a really young age,” Masciopinto says.

Enter El Rescate, a transitional-housing program in Humboldt Park on Chicago’s West Side that serves LGBTQ and HIV-positive Latino youths. It’s the only program of its kind in the city, and Masciopinto recently lived there.

For him, and many others, El Rescate became a lifeline.

“They just started [El Rescate] two years ago and it’s for LGBTQ because we don’t have a safe place because a lot of shelters tend to be churches and it’s not accepted,” says Masciopinto.

He says he was kicked out of several drop-in shelters because of his sexuality. “I had a lot of odds against me: I was gay, I’m homeless, I’m young, and I’m Latino, which made it even worse.”

“A homeless youth doesn’t start with the same resources,” says Anne Holcomb, supportive services supervisor at Unity Parenting & Counseling, who has been working with homeless youth in Chicago since 1994. “They don’t just go from a shelter to having their own apartment.”

Many youth move back in with family after college, but homeless youth don’t have family to move back in with. “When it comes down to it, you’re on your own,” Masciopinto says. That is why, Holcomb says, transitional housing is key to ending chronic homelessness. Transitional-living facilities provide stable housing, independent living skills and opportunities to pursue education and employment to break the cycle of homelessness. “There are even more barriers if they are LGBTQ, pregnant and parenting, or have a mental disorder,” Holcomb says.

According to an August 2014 analysis by the Chicago Coalition for the Homeless, there are about 12,186 homeless youth (ages 14-21) in Chicago, and the number is on the rise. In Chicago, 33 percent of children live in areas of concentrated poverty, which is much higher than the national average, 13 percent.  As of 2012, 34 percent of people in Chicago ages 18-24 live below the federal poverty level. That number has been steadily increasing.

There are three over-represented subpopulations of homeless youth: They are a products of “the system” — the Illinois Department of Children and Family Services, juvenile facilities — they identify as LGBTQ, and they are pregnant and parenting.

As a result of The City of Chicago Plan 2.0, a seven-year action plan announced in 2011 to prevent and end homelessness, $2 million has been designated to expand youth housing — this consists of “low-demand emergency shelter beds, developmentally appropriate transitional housing, and permanent housing.” According to Matt Smith, director of Public Affairs at Chicago’s Department of Family and Support Services, that money has gone toward providing supportive services and adding 114 beds in low-threshold overnight shelter for youth for a total of 360 youth beds as of August of 2013.

There has been a focus on providing drop-in programs and shelter beds, but very little progress in the way of transition services. Holcomb says it’s great the city has launched these new initiatives, but she is worried that transitional housing is under threat. She sees transitional housing as the age-appropriate solution for youth who are in transition themselves and need to learn life skills to become independent.

“We [homeless youth] really don’t get many services, and I think that needs to change,” Masciopinto says. “I struggle with getting to school, I struggle getting around for jobs,” he says.

“The program here [El Rescate], they take it out of their own money to help us out, and it shouldn’t be like that. The government should be helping us and get us back into schools or getting us into jobs and create these jobs for homeless people instead of sitting there and leaving them in the streets and watching them sit under the viaducts begging for money.”

It was a family crisis that led to Masciopinto’s homelessness. Prior to leaving home, Masciopinto worked a slew of jobs, including being a crew member at Little Caesar’s and a receptionist for Rincon Family Services. In 2012, the family was evicted and temporarily had to move in with family in Bartlett when Masciopinto was 17 and a junior at Dr. Pedro Albizu Campos High School. Masciopinto knew that not all his credits would transfer and he didn’t want to drop out of high school, so, he says, “I had no choice but to stay in Chicago.” 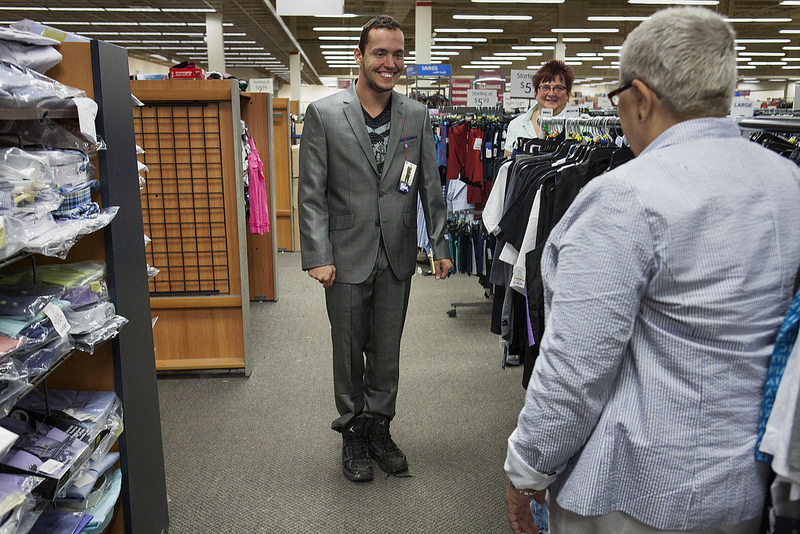 Dino Masciopinto, 18, goes prom shopping with his senior case manager, Zenaida Lopez, at the Burlington Coat Factory on Monday, May 19, 2014. 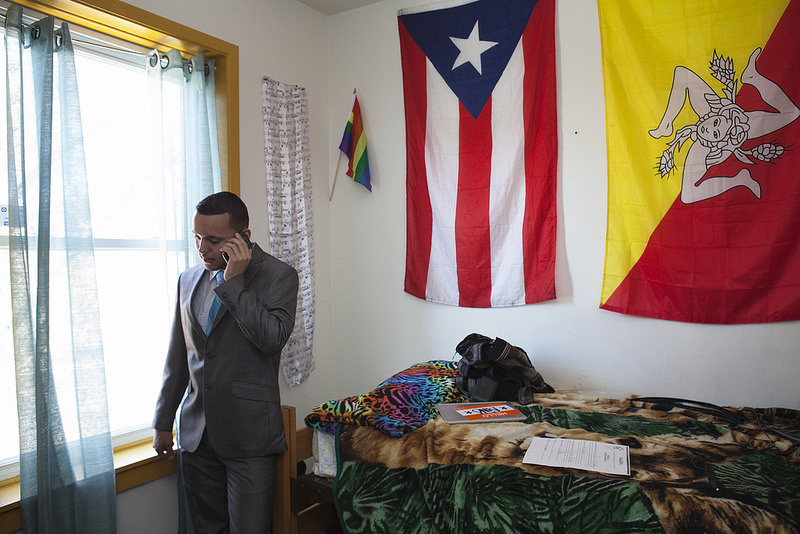 Dino Masciopinto, 18, talks on the phone in his rome at El Rescate Independent Living Program, a transitional housing program based in Humboldt Park, on Friday May 23, 2014. 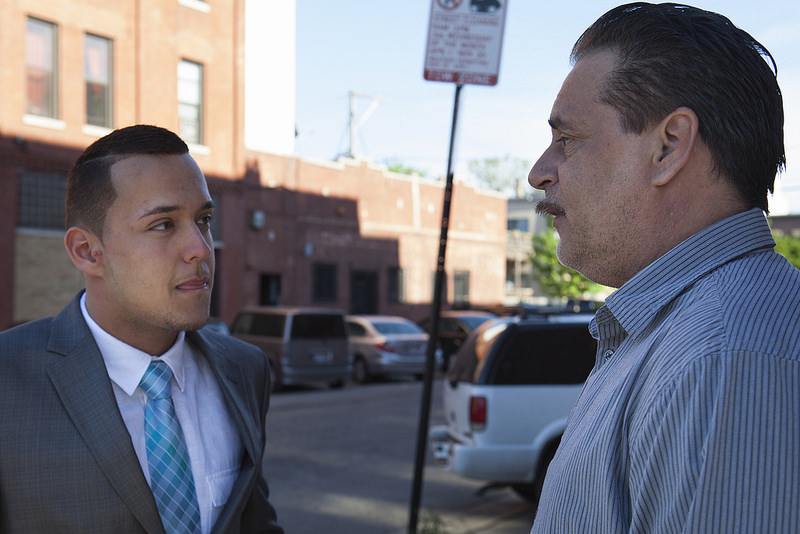 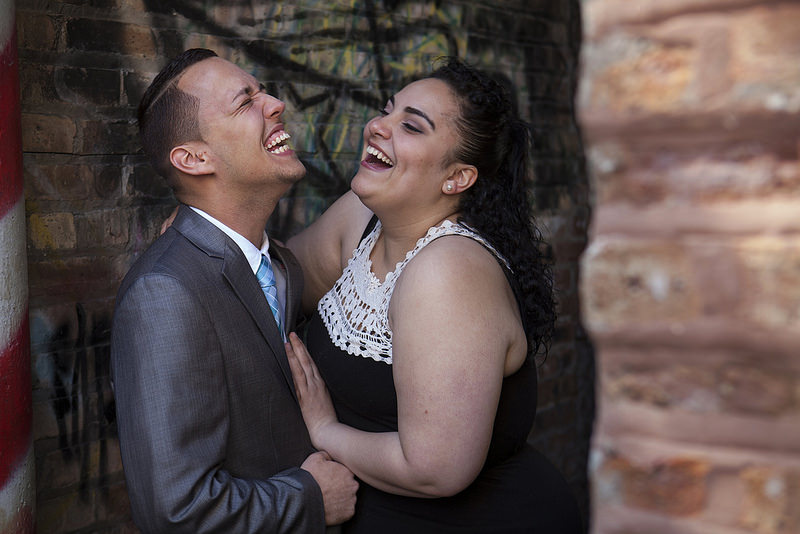 Dino Masciopinto, 18, poses for portraits with fellow Rescate resident Saphyre Lee Rivera, 19, at El Rescate before his senior prom on Friday May 23, 2014. 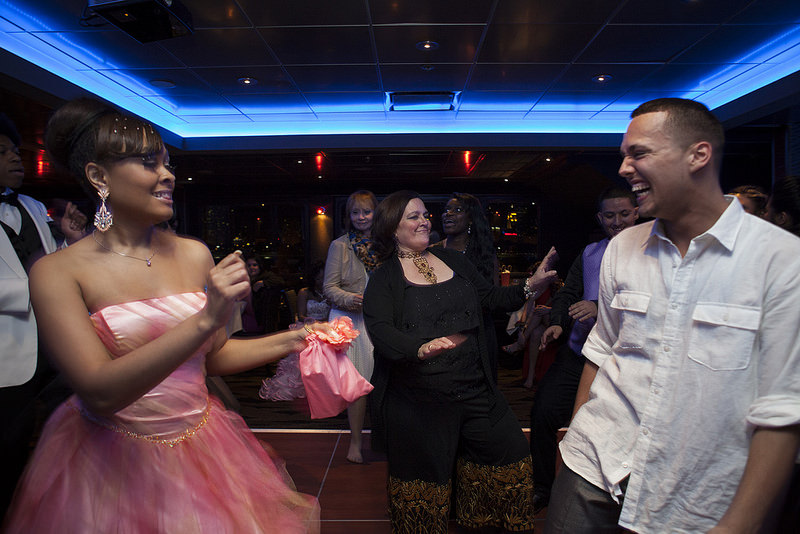 Dino Masciopinto, 18, dances with Aaliyah Stamps, 19, during the Dr. Pedro Albizu Campos High School prom aboard the Odyssey on Lake Michigan on Friday May 23, 2014

“It’s just been a really, really, really tough experience for me. I’m happy where I’m at at the moment. I can honestly say that I’m a lot farther than a lot of people my age. Everybody’s worried about getting the newest Jordans or getting brand new hats or getting tatted up or turning up, and when it comes down to it I got a 4.0 GPA and I wear the same clothes every other week, and it doesn’t bother me.”—Dino Masciopinto

He ended up sleeping in the streets for about a month. “I used to hide my stuff behind garbage cans, and in garbage cans so people wouldn’t steal my stuff and so no one at school knew I was homeless.”

Masciopinto got desperate and sought help from school staff, who referred him to El Rescate. He moved into the facility in November of 2013 and stayed until the end of June 2014.

Just because people are homeless doesn’t mean they are addicted to drugs or beg for money on the street, Masciopinto says. Many have difficult stories and want to work and make a life for themselves.

Currently he is living at the Sheil Home in the West Loop, which is part of a residential program by the Mercy Home for Boy & Girls. He is enrolled at Dr. Pedro Albizu Campos High School in Humboldt Park with a January 2015 expected graduation.

According to Holcomb, supportive housing services are needed to help youth transition from emergency shelters and other stopgap measures. That way they can avoid becoming the next generation of homeless adults.

For more on El Rescate: http://chicagoreporter.com/wp-admin/post.php?post=8311&action=edit

Michelle is a photojournalism fellow at The Chicago Reporter.