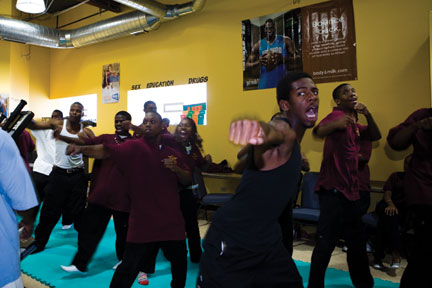 In Humboldt Park’s Dr. Pedro Albizu Campos High School, one stairwell is adorned with pictures of Puerto Rican male activists with quotes beneath that speak to the men’s cultural pride and pain.

Principal Matt Rodriguez says he wants to communicate that the school—overall, one of the higher-performing alternative schools in Chicago—is a place where the oppression his students may feel is understood. Indeed, the school is named after one of the leading political figures in the Puerto Rican independence movement.

Rodriguez hopes that the pictures and quotes resonate with the young men in his community—too many of them dropouts who feel alienated from school.

Neighborhood high schools in Chicago fail to graduate half of their black and brown young men. And once out the door, this downward spiral continues: Black and Latino males are less likely to turn to alternative schools than their female counterparts, and those who do are less likely to graduate.

“It is a problem for us,” Rodriguez acknowledges. “So where are our young men going?”

Often times, jail.” Studies show a clear connection between lack of education and incarceration: Research has found that as many as two-thirds of the nation’s prison population doesn’t have a high school diploma.

Many young male dropouts find it difficult to disconnect from gang activity and other negative behavior that is likely to land them in jail.

Sheila Venson, executive director of Youth Connections Charter Schools, says that about 3 percent of the students who attend one of the 22 alternative schools in her network—altogether, 144 students—transferred from there into prison last year. Overall, about half of all students have some involvement with the criminal justice system, including being on probation or awaiting a trial, Venson estimates.

Those young men who have no involvement with the justice system tend to be involved with gangs, which give them trouble about attending school. Rodriguez says Albizu Campos, which spans several storefronts on Division Street, is located inside one gang’s territory but outside the turf claimed by two others. For students who must cross territories to get to school, that spells trouble, and Rodriguez has had to negotiate with gang leaders to ensure safe passage for the students.

Rodriguez has also hired former gang members to work at the school to help young men who are in gangs to get out. Such hiring might seem controversial, but to Rodriguez, it’s a necessity.

“In order to keep young men in the school, we have to [be able] to reach out directly to the gang chief,” Rodriguez says. “I have students in here full of tattoos, and I don’t turn them away. I try to get them out of the gang. We aren’t always successful, but we have to try.”

Myra Sampson, principal of CCA Academy (formerly Community Christian Alternative; the school has no religious affiliation), an alternative school in North Lawndale, gives one reason why young women often kick into high gear at her school: Motherhood. As many as one-fourth of female CCA students are teen mothers, and they often see their baby as giving them a reason to work hard to succeed in school, Sampson says.

“I don’t think as many boys have the same reaction to parenthood,” she adds.
Bryan Echols, executive director of the grassroots community group MAGIC (Metropolitan Area Group for Igniting Civilization), says some young men just give up.

“They say to themselves, ‘I didn’t like school anyway. Why bother?’ ” Echols explains. “The streets have their own appeal.”

Some of the young men he encounters are embarrassed about being dropouts or have not heard much about alternative schools. So they pursue a job or GED instead—despite the lack of good jobs for dropouts and the high failure rates on GED exams.

One young man, Darnell Grigler, is an example. He has no desire to join the legions of young black male dropouts in Chicago, and says he likes school and longs to go back and earn his diploma.

But Darnell says he was bullied while attending a charter school, and after an especially rough day, he couldn’t imagine going back. “I told the principal and they didn’t believe me,” says the slight 18-year-old. “I felt like they didn’t care.”

Darnell then enrolled in a neighborhood high school, but his mother pulled him out after only three weeks. Darnell says that she worried about his safety at the school, which has a reputation for being rough.

Not knowing where to put him, she took Darnell to Kennedy-King, one of the City Colleges of Chicago, and enrolled him in a GED class. He’s now waiting to take the exam.

Darnell says he never knew about alternative schools for dropouts, and would have preferred to enroll in one if he had.

“I feel that a diploma would be better than a GED,” he says. Most experts agree that a high school diploma is a stronger credential.

Alternative school principals also point out that it’s very difficult to keep students—male or female—in school when they are far behind in classes. Because they are behind, many students find themselves in a race against time.

Jonathan Williams will turn 21 next January. But his coming-of-age will be bittersweet: He will no longer be able to attend public school, and needs to quickly earn enough credits to get his diploma before then.

Sitting in a classroom at Prologue Early College High, Jonathan talks about his road back from being a dropout. When he was a student at Sullivan High School in Rogers Park, he didn’t want to let teachers know how much academic trouble he was having.

“I was coming to class, until I didn’t understand, and then I just dropped out,” Jonathan says. “I got no help from anyone.”

He saw the streets as a viable option, a place where he had friends. For three years, Jonathan says, he lived day-to-day. As a former foster child, he had an apartment that was paid for by the child welfare system, and he hung out with friends. But eventually, he realized that things were about to change: His apartment would no longer be paid for, and he would no longer be entitled to a free public education.

A friend of a friend told him about Prologue in West Town. Jonathan showed up there in December 2008 with 16.5 high school credits—4.5 less than he needs to graduate.

Even after summer school, Jonathan says, he will still need to earn at least one more credit to get that diploma. He feels it within reach.

There’s another good part about coming back to school. Jonathan sits behind a desk one warm summer morning reading the book, “My Bloody Life: The Making of a Latin King,” Reymundo Sanchez’s story of his life in a Chicago gang.

With a bit of wonder in his voice, Jonathan observes that this is the first time he has read a book. “In almost ever,” he says.