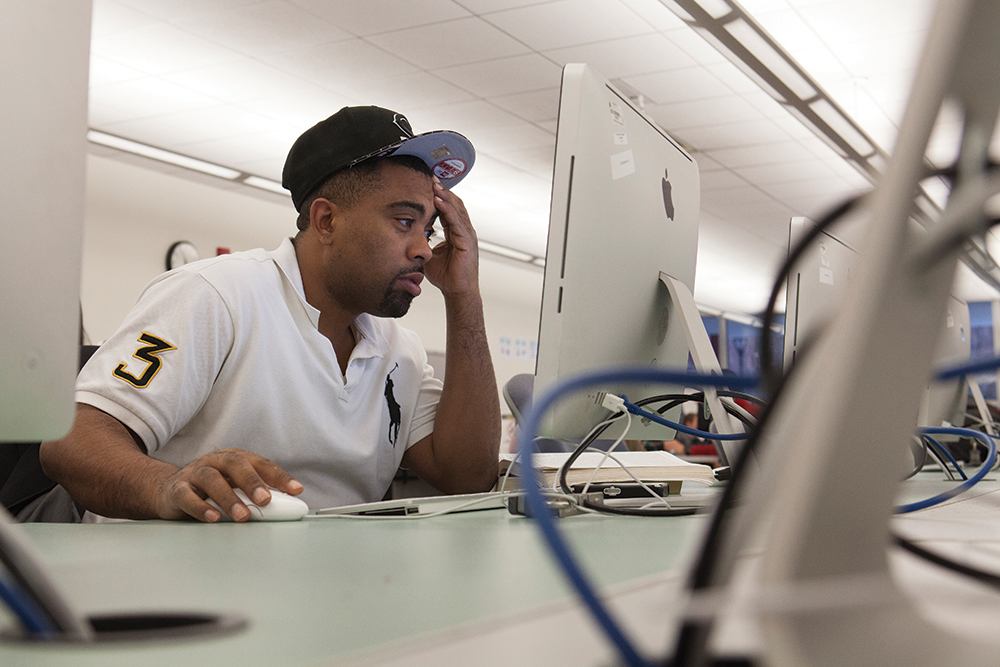 Vonzell White works in one of the computer labs at Northeastern Illinois University. He has three semesters to go before he graduates with a degree in social work.

Vonzell White, at 33, has three semesters to go before he graduates from college.

“Sometimes I think I could have been way better,” says White, a student at Northeastern Illinois University. He’s spent nearly a decade working toward a degree, refusing to give up on his dream of becoming a social worker. “But it ain’t about how old you [are], because you can be an old fool or a young fool.”

Non-traditional students like White — including those who got a late start, attend on a part-time basis, have a job or are raising children while they’re going to school — are becoming more common on college campuses. Nationwide, more than one-third of undergraduate students are over the age of 24, and a majority of these only attend college part-time, according to U.S. Department of Education statistics. That’s because many of them work: A 2012 U.S. Census report showed that about one in five college students maintains a full-time job while in school.

Success stories like White’s — if he perseveres and earns his degree next year — are rare. Yet the obstacles he faces are common among students from lower-income backgrounds. And helping young people navigate around the barriers while on the non-traditional path will be an important element in increasing college graduation rates.

White grew up in a two-bedroom apartment in West Humboldt Park with his mother and six of his eight siblings. His mother, who had her first child at the age of 15 and never finished high school, struggled to pay the electricity and gas bills. Often, meals were sugar sandwiches or hot dogs.

“We grew up harsh,” White says. “I don’t think education was valued in my family. It wasn’t one of those things you learn when you’re growing up. It was just, ‘Put on your clothes and go to school,’ but no explanation about why it mattered.”

After bouncing around several high schools, White eventually graduated from Austin Career Education Center in 2001. He stayed away from further schooling for a few years, like many of his childhood friends. Instead, he spent time chasing girls, shooting dice and even selling drugs.

White can’t quite explain what motivated him to want to change his life. But he saw friends and relatives float in and out of jail, sometimes on trumped-up charges, and knew he wanted something better for himself. One day, rather suddenly, he felt compelled to get off the streets and back into school.

He enrolled in Malcom X College, one of the seven City College campuses. But his studies kept getting interrupted. One time, a relative got sick and needed a caretaker. Another time, police raided the homes of several relatives and White ended up on house arrest on drug charges. He was out of school for 10 months. The charges were eventually dropped.

In 2013, White finally had enough credits to transfer to Northeastern, where he is working toward a bachelor’s degree in social work. Eventually, he wants to earn a master’s degree as well.

“I want to help the young boys get back to school,” White says. “Even if they’re going to vocational school or alternative school — it doesn’t matter.”

Toward that end, White is a volunteer with the nonprofit organization CeaseFire Illinois, which works to reduce gang-related violence in Chicago. Plus, he has a full load of classes and has to fit in a part-time job at a department store.

Still, he’s determined to reach his goal. “I will graduate from college because my main thing is getting out of poverty,” White says. “I’m not out of it yet. I have a job and I go to school, but I owe debts and I’m still in poverty.” Lizbeth Obispo, center, returned with her daughter, Khryztal, to Sullivan High a month after graduating last year for a party hosted by the Umoja Student Development Corp. Umoja and other nonprofits help many high schools keep up with graduates.

As part of its new rating system for high schools, CPS is now including a measure of how many graduates enroll in college the fall after they earn their diplomas, and how many of them remain in college a year later. Students who don’t follow this traditional route, like White, won’t be counted.

Kaleen Healey, a senior research analyst at the University of Chicago Consortium on Chicago School Research, notes that students who don’t enroll in a four-year college immediately after high school are a small percentage of those who eventually earn a degree. Students like White “are demonstrating a massive amount of persistence and stick-to-it-ness,” Healey says.

Obispo graduated from Sullivan High in Rogers Park last year. She’d been admitted to Loyola University and several other institutions, but is undocumented and would not be eligible for financial aid, so the cost was too high for her to seriously consider any of the schools.

Instead, Obispo intended to enroll right away in Oakton Community College and get certified as a nursing assistant.

But as a teen mother, she had other obligations. Her daughter, Khryztal, was born during her junior year of high school. “If I ever have to make a decision between school and her, I’d choose her, of course,” Obispo says.

But by the time fall rolled around, Obispo changed her mind about Oakton. She decided to work for a few semesters at a local grocery store to save money and help support her family before enrolling in any classes.

In early October, Lurie Children’s Hospital — where Obispo had finished a summer internship — offered her a full-time job filling in as an appointment scheduler. Though the job is temporary, it pays well and gives her the chance to find out about potential permanent work.

The best part about it, Obispo says, is that her supervisors will give her a flexible schedule if she wants to go to college — and the hospital will reimburse her expenses if she stays on. So in January, she finally enrolled part-time at Oakton and is taking courses to become a nurse assistant.

“I got so lucky,” Obispo says. “And I want to stay at my job because this is where I want to be a nurse.”

Chad Adams, principal at Sullivan High, was heartened to hear of her success, though he recognizes it won’t help his school’s rating down the road.

According to the district’s way of thinking, or to others looking at the situation from the outside, it might appear that Sullivan staff didn’t push Obispo hard enough to get into school right away, Adams says.

“But ultimately this is better for this [student] and her family and her own child’s future,” he adds. “It’s a loss in the sense of our [school] report card, but another example of how success happens. In a school like ours, there are so many paths to post-secondary success.”