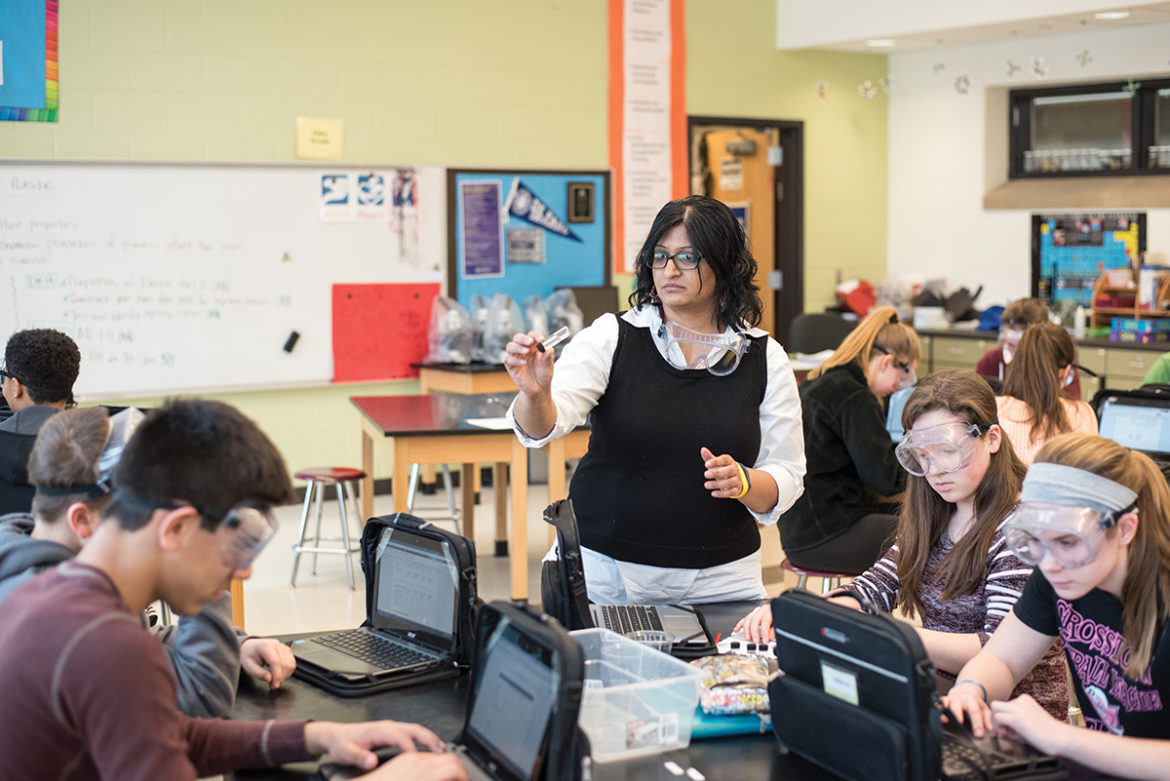 Teacher Rozy Patel oversees a science lab assignment at Edgebrook Elementary. The school focused professional development on integrating technology into the classroom this past school year. Parent donations outfitted Patel’s classroom with microscopes and other supplies, freeing up resources for other necessities.

When Catalyst Chicago went to press with this issue, lawmakers in Springfield had finally passed a stopgap budget that will let schools open in the fall, in Chicago and in other districts that had sounded the alarm about possible shutdowns. After a year-long stalemate, the temporary budget will allow the wheels of state government to continue turning for a time. Low-income college students will receive long-awaited grants for tuition, road construction projects will move forward and social service programs will get an influx of much-needed cash.

But there’s no reason to breathe a sigh of relief, at least for longer than a few seconds. As one legislator aptly described it, the budget bill was nothing more than “a cowardly way to pretend we have done something” — conveniently before November, when all 118 state representatives and 40 of 59 state senators are up for re-election. A six-month budget only kicks the problem down the road and sets the stage for another stalemate in January.

With the bill, Chicago schools will get an extra $135 million in state aid and $205 million to pay toward teacher pensions, plus keep $74 million the district was projected to lose because of declining enrollment. The School Board also got the authority to levy another $250 million in property taxes to pay for pensions. The agreement, according to a story in the Chicago Sun-Times, came after back-and-forth between Mayor Rahm Emanuel and Democratic leaders, who initially asked for $650 million, and Gov. Bruce Rauner and Republicans, who wanted pension reform.

Even with the compromise, Chicago still must come up with another $300 million to close its deficit, and it’s unclear what the resulting impact will be on classrooms.
Further down the road, in 2017, the district’s pension bill for teachers will be $700 million.

Catalyst has reported on the annual budget crises in CPS, and the fight for school funding reform at the state level, since the publication was launched in 1990. The solutions over the past 25 years have ranged from the usual — one-time infusions of extra cash, accounting tricks, tax hikes — to the truly bizarre, as when, in 2006, then-governor-turned-federal-prisoner Rod Blagojevich proposed selling the Illinois Lottery to raise money for education.

What’s even more infuriating is that we, as citizens and taxpayers, have to tolerate lawmakers and a governor who repeatedly violate the public trust by refusing to acknowledge reality and fix our state’s fiscal problems.

It’s infuriating that our schools and colleges — not to mention our safety net of services for the most vulnerable, our parks, our roads, our public employees, every person and program that makes Illinois run — are left to rely on last-minute fixes rather than a real solution that would reform the state’s tax structure and funnel revenue to vital services.

What’s even more infuriating is that we, as citizens and taxpayers, have to tolerate lawmakers and a governor who repeatedly violate the public trust by refusing to acknowledge reality and fix our state’s fiscal problems. Let’s not forget that anger when we have a chance to do something with it: at the ballot box, not just this November but beyond.

In a world where even those children from the lowest-income households typically have their own cell phones, how real is the “digital divide?” As it turns out, quite real for children in Chicago Public Schools, as we report in this issue.

Schools in Chicago and elsewhere are turning more and more to “personalized learning” models that rely on technology, which adapts as children progress through increasingly difficult lessons. CEO Forrest Claypool has called it “the future of education.” But in CPS, that future is hazy: Most schools, especially those in lower-income communities of color, don’t have enough up-to-date computers, reliable internet or trained teachers to fully integrate technology into the classroom.

Some lower-income schools have flourished with the help of outside funding. But public schools shouldn’t have to rely on private philanthropy to provide a 21st Century education.

The digital divide is yet another sign of the inequity that children of color encounter in their schools. And our reporting makes our latest news especially relevant: Catalyst will soon merge with our sister non-profit media outlet, The Chicago Reporter.

For over 40 years, The Reporter has covered issues through the lens of race and inequality. Much of the dialogue around quality education intersects with discussions of race and class, especially as schools and districts become more diverse. And education is an important rung on the ladder of equal opportunity. For these reasons, the decision by our parent organization, Community Renewal Society, to merge its publications makes sense.

Because of the merger, this issue will be the last print issue of Catalyst. We will continue to publish our reporting online at catalyst-chicago.org until the merger is final in 2017 and education becomes part of The Reporter’s mission-driven reporting on race and inequality.

Join us online and on social media as we move Catalyst’s legacy forward.