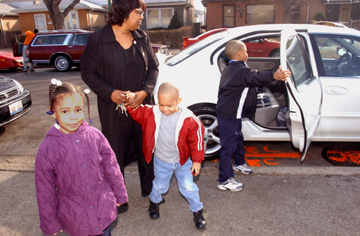 The tuition-based preschool program at Blaine Elementary has been a blessing for Beth Ryan, the mother of a 4-year-old with special needs.

“This program is fabulous,” says Ryan. “The school has a magnet curriculum, a Suzuki music program, a computer lab. Blaine is very progressive.”

Last year, when Ryan’s son, Trevor, was 3, Blaine was filled to capacity, as were other area tuition-based preschools, where 4-year-olds get preference over kids who are 3. Instead, Ryan patched together a full-day program that shuttled Trevor between a half-day state pre-kindergarten and a private child care center.

“It was a crazy schedule,” she recalls. “There were some mornings that we didn’t know what we were doing.”

Many early childhood advocates are not surprised.

Finding a full-day program for a special needs preschooler is “extremely hard,” says Tamar Heller, who heads the Disabilities and Human Development Department at the University of Illinois at Chicago.

“There is one study that shows 80 percent of mothers of special needs children have to give up their jobs because there are very few resources for these parents.”

When Trevor was born 22½ weeks premature, the Ryans paid for a nurse to care for him at home until he was 18 months. After that, he stayed at a private home day care. The family also qualified for an early intervention program funded by the federal government that covers the cost of special services, like speech or physical therapy, for premature or special needs babies until they are 3.

When Trevor turned 2, his pediatrician recommended that he be placed in a formal child care setting so he could interact with other children.

Ryan began searching for programs close to her North Center home, but pickings were slim. Most centers would not take children younger than 3 unless they were potty trained. “Trevor was not,” Ryan says. “I got put on waiting lists.”

Finally, Ryan lucked out with Apple Tree Learning Center, located just four blocks from her home. Under the early intervention program, Trevor would continue receiving therapy for his developmental delays and speech.

About the same time, Trevor would soon be turning 3 and the Ryans learned that special education services would then be available only through a Chicago public school. “That’s when we started putting ourselves on [waiting] lists,” Ryan says. “We went to Blaine, Jahn and others, but they were full.”

Meanwhile, Ryan had Trevor tested for special education services at Coonley Elementary, their neighborhood school. The school compiled an individualized educational plan for him, and explained the school’s offerings. Its state pre-kindergarten program partially fit the bill, and the Ryans enrolled their son.

But the program was only 2½ hours long. Ryan went back to Apple Tree to persuade them to take Ryan for the rest of the day. At first the school was reluctant because it didn’t want to be responsible for getting Trevor safely off the bus that brought him there.

“Apple Tree told me, ‘We love you and Trevor, we know he needs these services, but who is going to do this?'” recalls Ryan.

Eventually, Apple Tree caved in. The Ryans would pay the full-day rate—$125 a week—even though Trevor would attend only five hours a day.

Once, Ryan asked Coonley’s principal to consider opening a tuition-based preschool program. A survey was sent to neighborhood parents, but there was little interest.

Last June, Ryan got a call from Blaine about an opening in the fall. “Trevor is the only child there with special needs, but that hasn’t been a problem,” she says. A therapist works with him at the school, and he is in classes with children who do not have disabilities.

“The board really needs to open more of these programs in this area,” Ryan says.

Grandmother fills in for working parents

Muhammad’s daily routine is the sacrifice she makes for her son and daughter-in-law, whose work schedules make it impossible for them to shuttle the children around themselves. The problem is common for parents who juggle full-day work schedules with half-day early childhood programs, which often are not aligned with regular school schedules.

“This family’s story is more common than people realize,” says Sean Noble, senior policy associate for Voices for Illinois Children. “And this is very frustrating for parents.”

Noble says universal access to preschool means making sure families have options to fit their schedules, whether it is full-day early childhood programs or child care and educational programs in the same building that can be strung together creating a full day.

Either setup would help the Muhammads. “It’s tiring,” says Muhammad, 50. “I wish my granddaughter’s preschool program were all-day.

“I could get more accomplished and the children would have more time to learn. Two and a half hours is not a lot of time.”

Aminah Muhammad’s day begins at 4:30 in the morning because she has to get to her son’s house, only six houses away, by 5, when her daughter-in-law leaves for work. Muhammad’s son—a manager for Southwest Airlines—travels a lot and has an unpredictable schedule.

“I get the kids up at 7:30, and then drop them off,” says Muhammad, who drives even though the school is only three blocks away.

When she returns home, she squeezes in some time to home school her 2-year-old grandson, Rashad. “I work on colors, ABCs, numbers and some spelling,” says Muhammad. “Sometimes we sing songs.”

In a couple of hours, she and Rashad are heading back out for their first pickup. Muhammad says even though her granddaughter could stay home with her, the family really wanted Aaisha to interact with other children to get her to overcome shyness.

Back home again, Muhammad feeds Rashad, gets an early start on dinner, allowing Aaisha to take over teaching her brother. Just before 2:30, she’s hustling both kids out the door.

Chicago Public Schools has blended Head Start with both state pre-kindergarten and Child Parent Center funds to create a handful of full-day collaborative programs that serve 620 children. None are in Muhammad’s neighborhood.

There are, however, 396 half-day state pre-kindergartens in Chicago public schools that serve 13,900 children.

“Children should have a [full] day instead of two and half hours,” says Aaisha’s preschool teacher Shaun Holt, who explains that lessons must be sandwiched between two meals and bathroom breaks.

Principal Joan Forte has asked district officials about paying for full-day state pre-kindergarten at Randolph. “Our kids come to school and don’t know their real names or even how to speak in complete sentences,” says Forte. “If we are to play catch up with them, we need a full-day program. I’d like a full-day kindergarten, too. We have room.”

By September, Rashad will be old enough to attend Randolph’s preschool, but a consequence of his grandmother’s harried schedule could hold him back.

“To get in the program, children must be potty-trained,” Muhammad laments. “I’m trying to potty train Rashad but things like that take time, and with this schedule, I haven’t been able to really work with him.”

Still, Muhammad’s son, who is also named Jamil, appreciates his mother’s efforts. Without her help, “only one child, Jamil, would be in school, or my wife would have to stop working.”

Single mom Adela Reyes has two children under 5 and scrapes to support them on $20,400 a year. She’s due for a raise in June, but instead of eagerly anticipating it, Reyes is considering turning it down.

“For my kids to stay in their program, I can’t make more than $21,819,” says Reyes. “I can’t afford to pay the full cost of my children’s child care. My only other option would be to ask a relative to keep my kids.”

In the push to get people off welfare and into the workplace, many low-income families find themselves in a Catch-22: If they advance on the salary scale, they lose government benefits and, therefore, can’t get ahead financially.

In the case of subsidized child care, the situation is compounded by outdated guidelines. To qualify, a family’s income must fall below 50 percent of the state median income. However, the state is still using income data from 1997. Since then, median income in Illinois has increased 31 percent, according to the U. S. Department of Health and Human Services, which monitors the program. If the guidelines were adjusted to current income levels, a family of three like Reyes could earn as much as $31,787 and remain eligible.

“This is disturbing,” Reyes asserts. Under these guidelines, families are told they make too much when, in reality, they don’t make much at all, she explains. Parents who work overtime or receive pay raises risk losing eligibility, and the program reassesses family income every six months.

Attorney Dan Lesser of the National Center on Poverty Law estimates that an additional 20,000 children in Illinois would be eligible for subsidies if state median income figures were updated. “The program was created in 1997, and there was nothing put into place to update the figures annually,” Lesser explains. “It would have cost the state $7 million a year to update the program. Now it will cost $44 million.”

In February, the Day Care Action Council of Illinois drafted a bill to update eligibility to 2003 income levels, and to adjust those figures annually. As Catalyst went to press, the measure had passed the House and was pending in the Senate.

“This problem is one of our No. 1 issues,” says Maria Whelan, director of the Day Care Action Council of Illinois. “We have these world-class programs, but these outdated figures create a wall of income ineligibility that is keeping families out.”

If the measure passes, it could be effective as early as July, the beginning of the fiscal year.

In the meantime, Reyes sends her children—4-year-old Miranda and 2-year-old Jacob—to the Carol Robertson Center in Little Village, where Reyes works as an intake coordinator, determining whether families are eligible for any of the center’s three child care programs.

They are enrolled in full-day subsidized preschool at Carol Robertson, which also operates a half-day Head Start and an infant-toddler program. The center also offers before- and after-school programs and summer camp for kids aged 5 to 12.

“I love the convenience,” Reyes says. “Plus the teachers do a great job here. My kids have learned so much. This is like a second family for them.”

However, in June she’s scheduled for an evaluation that could mean a raise. But an increase of just $28 a week would make Reyes ineligible for subsidized child care, but wouldn’t come close to covering the additional expense of footing the bill for child care on her own.

“It’s kinda hard to decide,” Reyes worries. “I want to keep my children here, but I have to live and provide for my family, too.”