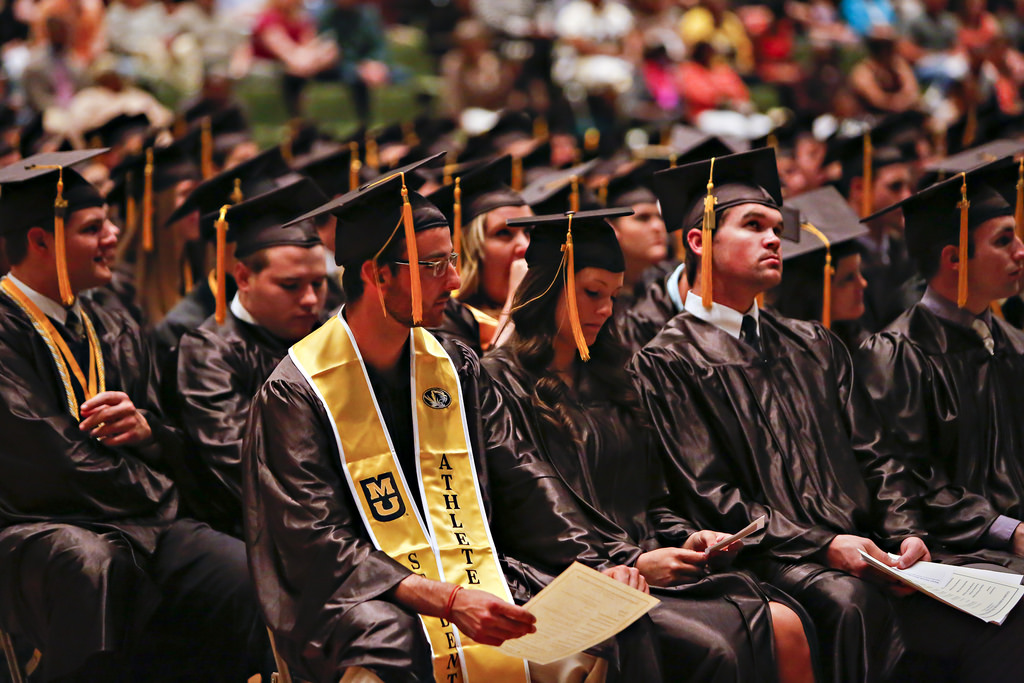 A 2014 commencement at the University of Missouri.

This article originally appeared in our sister publication The Chicago Reporter.

Students of color at the University of Missouri scored a major victory this week when the university’s two top leaders agreed to resign amid protests about their lackluster responses to racist incidents on campus.

The resignations came swiftly, as did promises by the Board of Curators to meet several of the group’s other major demands: hiring a diversity officer, providing additional counseling to students who experience discrimination and creating a task force that will develop plans for diversifying the Columbia, Mo., campus.

But eliminating systemic inequities at the University of Missouri—and other universities across the country—will not be a quick fix.

“Postsecondary education has become part of a system of oppression that pretty much guarantees that—even absent the worst racial motives—we will very reliably produce outcomes that will pass racial and economic privilege from one generation to the next,” said Anthony Carnevale, director of the Center on Education and the Workforce at Georgetown University.

Like at many selective universities across the country, black and Latino students are underrepresented at Missouri’s flagship campus, known colloquially as Mizzou. African-American students make up 14 percent of 18-to-24-year-olds statewide but only 7 percent of undergraduates at Mizzou. Latinos comprise 5 percent of college-age residents and 3 percent of students.

Colleges where blacks and Latinos are over-represented tend to be open-access community colleges and for-profit universities, where the likelihood of graduating—and the economic advantages if you do—are significantly lower than at selective universities.

Inequities in higher education don’t end with lower enrollment of people of color. It is well-documented that going to college doesn’t actually increase your earning power; only graduating from college does.

And nationwide, black and Latino students are much less likely to graduate than white students.

Of students who started at a four-year college in 2007, only 41 percent of black students had graduated by 2013, compared with 53 percent of Latinos and 63 percent of white students, according to the most recent data from the U.S. Department of Education. That’s a difference of 22 percentage points between black and white students.

It’s worse than it was for students starting college in 1996.

That matters because Americans with some college but no degree have median earnings of $33,175, according to 2014 Census data, while Americans with a bachelor’s degree earn $50,450.

That income inequality has been growing, and lower enrollment and graduation rates among students of color suggest that higher education has become “more part of the problem than part of the solution,” Carnevale said.

So what is the solution?

Some institutions have closed the gap—but it didn’t happen overnight and their efforts are ongoing.

In 1994, when Lawrence Abele became Florida State University’s chief academic officer, he started to look at attrition data and found something concerning: African-American students, particularly those from low-income backgrounds, were less likely than other groups to drop out after freshman year, but much more likely to drop out after two years.

“It might have been naïve, but my question was, why did we admit them if we didn’t think they would be successful?” he said. “And if we admitted them, didn’t we owe it to them to provide everything they needed to ensure that they were successful?”

The university began to more closely monitor students’ classes, and if a student did not take a required course on schedule, they had to meet with an advisor.

Administrators also made an effort to create a community on campus for students most at-risk of dropping out: those who were low-income and students of color.

Abele and his committee decided to admit 60 students, mostly African-American, with lower-than-average SAT scores and at high risk of dropping out, to help similar students already on campus find social support. But it didn’t work.

“Everyone agreed that was too few students to really create the visibility and community,” he said. So the next year they admitted 400 high-risk students. And the effort succeeded.

The university also created two new honors societies: one named after W.E.B. Du Bois, to recognize high-achieving African-American students, and one named after Oscar Arias Sanchez, a former president of Costa Rica and winner of the Nobel Peace Prize, to recognize high-achieving Latino students. The goal was to counter-balance the intensive counseling with recognition for those who were succeeding.

In 10 years, Florida State increased its graduation rate for all students from 63 percent to 74 percent. Now the gap between black and white students is only three percentage points.

There is still a long way to go. Florida State’s population doesn’t look like the state overall. In Fall 2014, 8 percent of undergraduate students were black and 18 percent were Latino, compared with 21 percent and 28 percent, respectively, of the 18-to-24-year-olds statewide. In part, that is because the state banned race-based affirmative action in admissions in 2001, leading to decreased black enrollment.

Florida State serves as a case study in the importance of creating a supportive community for students of color on college campuses, a demand made by students at Mizzou this week. But it also serves as a reminder that there is only so much that individual universities can do on their own.