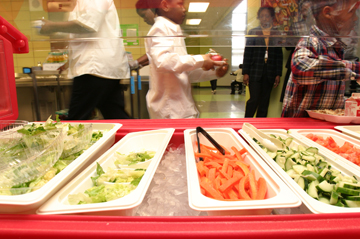 A salad bar at DePriest Elementary

It takes only one committed person to get the ball rolling toward a student health plan, say those who have done it. To help individuals who want to try, Catalyst sought advice from staff at Chicago Communities in Schools, a non-profit that links schools to free services, and from people who work on Community Schools, a district initiative that pairs schools with non-profits that provide social and academic support to kids and families. Communities in Schools is working with 116 schools; Community Schools has set a goal of 100 by 2007. These experts referred Catalyst, in turn, to schools with home-grown programs. Here is what we learned.

You can’t change anything by yourself, so talk to other people who may have similar concerns and then generate interest in finding solutions. Nurses might know about asthma, primary teachers about hygiene, and gym teachers (who see a lot of kids) about children who are overweight.

If you’re a parent, see if other parents share your concerns.

LaDonna Redmond, a parent at Nettelhorst Elementary in Lake View, wanted healthier options in the school’s cafeteria, including more fresh fruit and vegetables. She brought up the topic at her school’s parent co-op and also approached the principal, Susan Kurland, who joined in her enthusiasm. “Dr. Kurland is always, ‘Let’s go! How can I help? What else do you need?'”

Winning support from the principal is crucial for any new endeavor, says Julie Kuhn of Communities in Schools. School staff have so many demands on their time that new efforts are unlikely to take off unless the principal sets them as a priority.

With the principal behind her, Redmond approached Sue Susanke in the CPS food service bureau. Their conversation eventually led to a pilot project introducing salad bars in several elementary schools, including Nettelhorst this winter.

Redmond is president of a non-profit group, but she says it doesn’t take any special skill for someone to st art a program at their school. “It takes caring,” she says. “If you care about any issue and you want to see change, that’s the qualification.”

You’ll probably need a committee to move your ideas forward, “but don’t reinvent the wheel,” cautions Denise Taylor, executive director of the Chicago Campaign to Expand Community Schools. Many schools are overrun with committees, so try to find an existing one with a compatible agenda, and recruit additional people interested in health, she suggests.

Henderson Elementary in North Lawndale uses its community school advisory committee to address health issues. The committee, which includes the local school council president, principal, counselor, teachers and a volunteer from the North Lawndale Mental Health Facility, manages many of the school’s external p artnerships. A subcommittee concentrates specifically on health goals, such as providing physicals and vaccinations for students on site.

Chase Elementary in Logan Square assigned health issues to an existing support team that includes the nurse, counselor, social worker, a teacher and the assistant principal. Besides coordinating health services, the team meets for an hour each week with teachers to identify resources for kids with mental or physical health problems that interfere with their learning.

Cliff Chan at Chicago Communities in Schools recommends polls of teachers and parents to find out what they see as the most significant health issues for students.

“A survey doesn’t have to be a big undertaking,” he says. “It can be a series of questions that you have teachers respond to at a faculty meeting.”

Seek student views, too. When Henderson elementary polled kids on their preferences for after-school activities, 13 chose anger management classes, says counselor Carol Cook. “I was surprised. I thought we would have to force it on them.”

At many Chicago schools, students’ health problems are extensive, from nutritional deficiencies and tooth decay, to obesity, substance abuse and depression. If you try to tackle them all at once, you may run out of energy to sustain the work. “Sometimes going slowly and adding over time is more successful,” advises Taylor of the Chicago Campaign to Expand Community Schools. For a st art, she suggests building on activities that are already taking place.

Some years ago, Whittier Elementary in Lower West Side began to emphasize healthy eating in its science curriculum, which already featured a large garden that several teachers had st arted as an environmental project. Today, kids grow vegetables in their classrooms, replant them in the garden and then pick them for salads. During the warmer months, parents harvest the produce to feed their children at home.

You might also zero in on the issue that you think most affects kids’ academic success. At some Chicago schools, asthma is a leading cause of absenteeism, says Chan. A school with that priority might organize regular visits from a mobile asthma care van, teacher training to identify students who need asthma testing and workshops for parents and kids on coping with the disease, he says.

Once you’ve set priorities, look for free services that match your goals and volunteers to help with such activities as fitness and dance classes.

If you need energetic volunteers, try fraternities, sororities and colleges of education, says Lisa Merdinger, resource coordinator for Nettelhorst’s community school programs. School staff and parents with local alma maters may have contacts. Local businesses, civic clubs, churches and synagogues are worth a try, too.

Don’t be afraid to cold call, she adds. And if the first call doesn’t get you what you want, keep trying. “Eventually someone will bite. More people than you realize.”

The success of any health program depends on those who handle the details, says Julie Kuhn of Chicago Communities in Schools. Suppose you want a mobile medical van to visit the school. That requires permission forms from parents, updated medical records, scheduling student appointments and shuttling them back and forth to class. “It’s not rocket science, but it requires attention, or it’s not going to happen smoothly.”

The mobile asthma care van has reluctantly dropped some schools that repeatedly failed to help them identify potential patients. It’s not that schools weren’t interested in the service, says Kuhn. “They weren’t organized.”