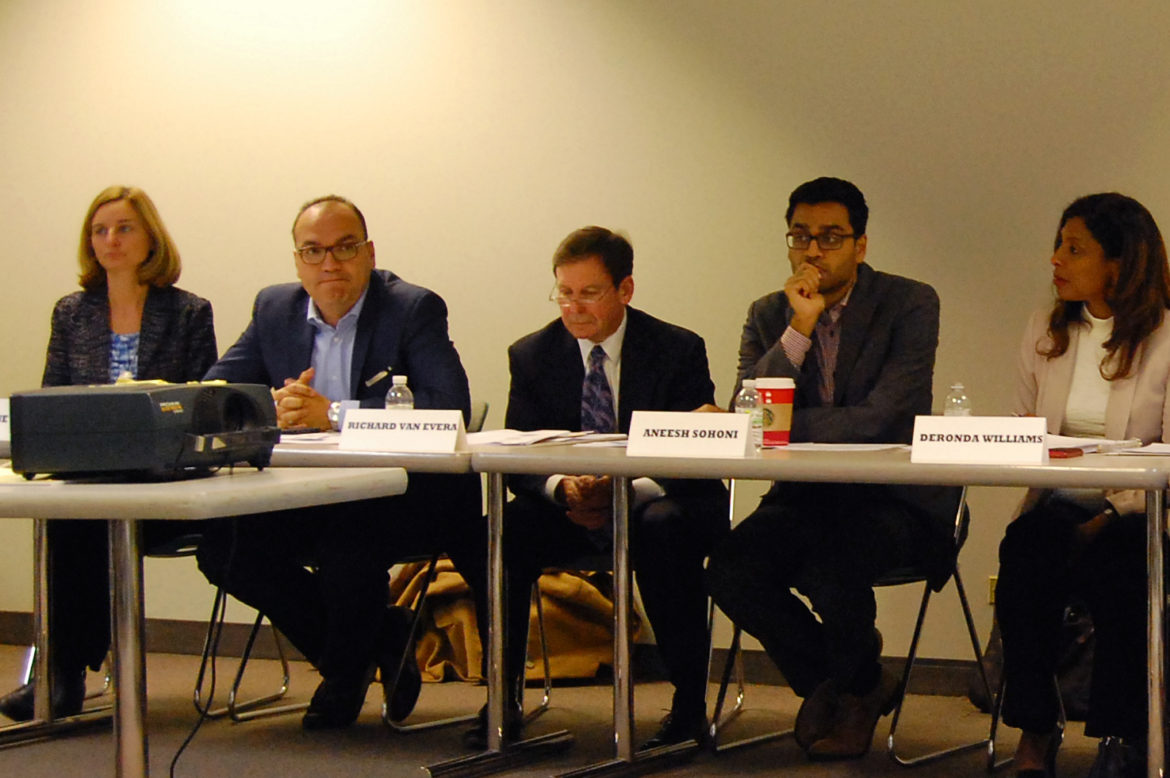 Jaime Guzman (second from left) has been appointed to the CPS Board of Education to replace Jesse Ruiz. He's pictured here at the December meeting of the Illinois State Charter School Commission, from which he has since resigned.

In appointing a Latino educator who supports charter schools to the Chicago Board of Education, Mayor Rahm Emanuel won both plaudits and a protest.

Juan Salgado, executive director of Instituto del Progreso Latino, a nonprofit community development organization that operates two charter schools, called Guzman a good choice because of his work in both education and with community organizations.

“He works with community leadership in real meaningful ways… and runs an institution now that supports community not-for-profits,” he said.

In contrast, the Chicago Teachers Union was furious. “While Mr. Guzman does have teaching experience, which is a rarity for members of the mayor’s handpicked Board, our students and their families do not need another pro-charter, politically connected rubber stamp who will continue the decimation of our neighborhood schools through charter expansion,” CTU Vice President Jesse Sharkey said in a statement.

Guzman, who replaces Jesse Ruiz on the Board, did not respond to a request for comment on Wednesday. In a press release, Emanuel said Guzman’s “experience in both the classroom and as an educational administrator make him well-suited to continue driving improvements in our classrooms across the city.”

A Chicago native, Guzman began his education career as a Teach for America corps member in New Jersey in the late 1990s. He went on to become a program director for TFA in Chicago and a bilingual teacher at Kanoon Magnet School in Little Village. He also served as a regional director for the National Council of La Raza, a civil rights group, according to his LinkedIn profile.

From 2007 through 2010, he worked in the CPS Office of New Schools, which oversees district charter schools and other new schools. He spent his final 11 months at that office as acting director.

Since then, Guzman has worked as chief advisor to the City Colleges of Chicago Board of Trustees and an outreach director for the Big Shoulders Fund, which helps low-income students pay for Catholic School enrollment. In addition, Guzman served on the Illinois Charter School Commission from 2011 until today, when he tendered his resignation.

Currently, Guzman is executive director of the Chicago office of the Taproot Foundation, which helps nonprofit organizations improve their operations.

Salgado said he was most familiar with Guzman’s work in the Office of New Schools, where he helped “shepherd” Instituto through the process of applying to open a charter school focused on health and sciences.

Andrew Broy of the Illinois Network of Charter Schools said he holds Guzman in high regard. In a statement, Broy said Guzman “brought a level of professionalism to the CPS Office of New Schools and the State Charter Commission.”

Others said that Guzman had flown largely under the radar in the city’s education and political scene.

Ricardo Meza, a former regional counsel for the Mexican American Legal Defense and Educational Defense Fund (MALDEF) who was involved in education equity issues in Chicago at the same time Guzman was at the National Council of La Raza, says he wasn’t familiar with Guzman’s work. “Whatever he was doing he was doing it quietly,” he says.

Sylvia Puente of the Latino Policy Forum says emerging Latino leaders aren’t always well known. She commended Guzman’s experiences as a teacher. “He’s certainly moving into a visible, high-profile role, being nominated to the vice chair of the Board,” she said.

Puente and others have criticized the lack of Latino representation in leadership positions in CPS since last summer, when the mayor removed former CPS administrator Carlos Azcoitia from the Board, replacing him with a white board member.

“We know that there is a huge and significant need and demand for the visibility of [Latino] leadership in CPS at all levels,” Puente said.