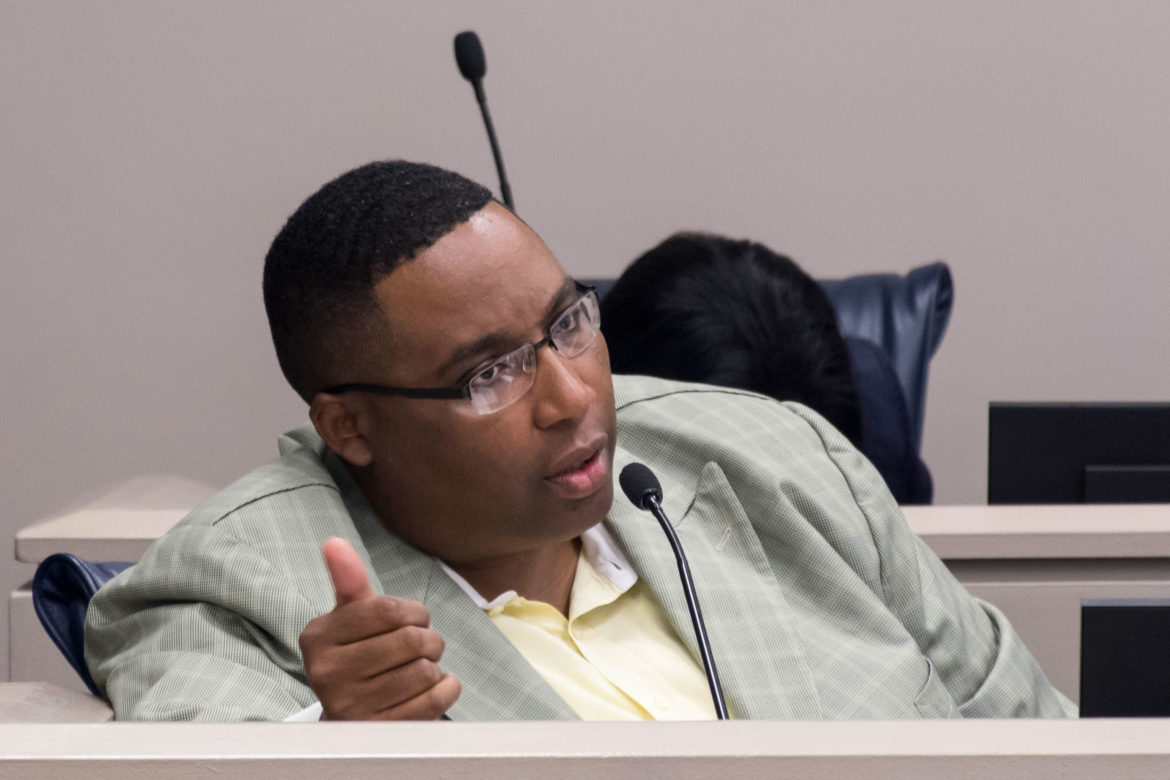 Ald. Jason Ervin, who represents the 28th Ward on the West Side, is the chief sponsor of a new ordinance that allows Chicago police to designate prostitution “hot spots” and order those believed to be loitering for the purpose of prostitution to disperse for at least eight hours or risk fine or arrest.

An ordinance passed last month by Chicago’s City Council outlawing “prostitution-related loitering” will lead to more arrests of unsuspecting women and transgender people of color, activists said, and is unlikely to stem demand for prostitution.

The ordinance, which passed by unanimous voice vote, allows police to order a person they believe is “loitering for the purpose of prostitution” to leave the area for at least eight hours. If they return, they could face fines ranging from $50 to $500 and up to six months in jail. A second offense would result in at least five days imprisonment.

“Any loitering law is a death warrant to minorities,” said Red S., an organizer with Support Ho(s)e, an activist collective that advocates on behalf of sex workers. (Red asked that their last name not be used because of recent laws targeting sex workers.) “Transgender and black and brown people will be targeted, and there will be an uptick in mass incarceration. [Anti-loitering laws] are steeped in racism and hate and mistrust.”

Ald. Jason Ervin, 28th Ward, the ordinance’s chief sponsor, told the public safety committee the ordinance is necessary to clean up areas of his ward where prostitution has made quality of life “terrible.”

“Who wants to pick up condoms off their lawn in the morning?” Ervin asked the committee, according to The Daily Line. “Do you? Does anybody?”

Responding to concerns from organizations that fight sex trafficking, the final version of the ordinance aimed to more harshly punish men who buy sex by reducing the fines for prostitutes and increasing them for johns. Men who are soliciting sex can be fined between $1,000 and $1,750 for a first offense.

In a written statement, Ervin said the ordinance is necessary to counter the “laissez-faire policing” and “constant stream of crime” residents of the neighborhoods in his West Side ward have experienced. But he said he tailored the ordinance to balance civil rights and crime deterrence.

“I don’t want to punish people for the innocent act of standing on a public sidewalk or any other lawful peaceful assembly,” he wrote. “Instead, the approach we take here will link loitering to real crimes.”

It is unclear whether police will make more prostitution arrests, even under the new ordinance. Over the past decade, prostitution arrests have declined dramatically, from more than 7,400 in 2004 to fewer than 740 last year. The drop has followed efforts by activists to encourage alternatives to arrest and prosecution for people who sell sex. A 2013 state law removed felony charges for selling sex.

“It is not our primary goal to arrest street prostitutes,” Tina Skahill, general counsel for the Chicago Police Department, told the committee.

But data analyzed by The Chicago Reporter shows that Chicago police are still much more likely to arrest women for selling sex than men for buying it. Ninety percent of all prostitution-related arrests in Chicago last year were connected to selling sex, compared with just eight percent for buying sex, according to a Reporter analysis of CPD data.

Although Illinois has followed other states in passing laws reducing penalties on prostitutes while increasing those for pimps and sex traffickers, less than one percent of prostitution-related arrests in Chicago last year targeted pimps.

One problem is that in the types of prostitution that are easiest to see — street-walkers and illegal massage parlors — it’s the sellers who are most visible, said Megan Rosenfeld, policy director for the Chicago Alliance Against Sexual Exploitation, which works to end demand for prostitution by encouraging prosecution of sex buyers.

Sellers, Rosenfeld said, “are in the same place every day. Neighbors are complaining about them being there each day. The buyers are coming and going.”

In an emailed statement, Ervin said the new ordinance “specifically targets traffickers and those purchasing services” and “gives police different tools to address the problem.”

But Rosenfeld said the effect would likely be the same.

“I don’t think Ald. Ervin is trying to target the sellers,” she said. “I think it’s a genuine attempt to address the whole problem. But it’s a misguided approach.”

“[The ordinance] is anti-poor, anti-trans and unacceptable,” they said.

The new ordinance borrows much of its language from the city’s current gang-loitering and narcotics-loitering ordinances, which allow police to order people to disperse if they think they’re idling for the purpose of gang or drug activity. If they return within eight hours, they can fine or arrest them.

Chicago’s original gang-loitering ordinance was struck down by the U.S. Supreme Court in 1999 for being unconstitutionally vague. That ordinance allowed police officers wide latitude to arrest people they presumed were gang members. The result was that police targeted thousands of young men in black and Hispanic neighborhoods, according to the American Civil Liberties Union, which filed the lawsuit. From 1992 to 1995, police issued 89,000 orders to disperse and arrested more than 42,000 people for gang loitering.

The ordinance was rewritten in 2000 to comply with the Supreme Court’s decision, and far fewer people have been arrested under the newer version. But the disparate impact on minority communities hasn’t changed. Over the past three years, CPD arrested about 620 adults for gang or narcotics loitering; 99 percent of them were black or Hispanic, according to a Reporter analysis of CPD data.

Like the gang-loitering ordinance, the new prostitution-loitering ordinance allows CPD to designate particular “hot spots” where the ordinance can be enforced. But the city keeps those hot spots a secret, making it impossible to know whether you’re in one or not.

CPD denied the Reporter’s public records request for a map of the current hot spots, arguing that releasing them would be “hazardous” to CPD because it would allow criminals “to bypass areas, security measures and responses, thereby reducing CPD’s ability to respond to such events and endangering CPD officers and the public.”

“On the surface of it, to have an ordinance that you can enforce but just in certain areas—and we won’t tell you where those are—is pretty ludicrous,” said Ed Yohnka, spokesman for the ACLU of Illinois.

“If this [ordinance] is a response to the community, the community ought to know” where the hot spots are, he added.

CPD said they are working on drafting directives in response to this ordinance and wouldn’t answer any other questions until the policy is ready for implementation. Ervin said he supports CPD publicizing the locations of the hot spots “so anybody can see where this ordinance would take effect.”

If past enforcement is any indication, the hot spots will most likely target communities of color. Over the past three-and-a-half years, more than two-thirds of prostitution-related citations and arrests have been made in just five majority-black and Hispanic community areas: Austin, West Garfield Park, Englewood, West Englewood and Humboldt Park. Parts of three of those neighborhoods are in Ervin’s ward.

New York is working to repeal its prostitution-loitering statute.

In April, New York State Assemblywoman Amy Paulin introduced a bill to repeal the state’s 1970s-era prostitution-loitering law on the grounds that it targets cisgender and transgender women of color, she said.

“It’s not necessary,” Paulin said of the current law. “It’s a way of harassing people and discriminating when you don’t like the way they look.”

Of the nearly 1,000 people arrested in New York City under that law in the past five years, 85 percent were black or Hispanic and 84 percent were women, according to data from the New York State Division of Criminal Justice Services.

“Police assume all transgender women of color are involved in the commercial sex industry,” said Kate Mogulescu, an attorney on the case. She added that many transgender women in New York socialize in areas where they feel safe meeting and interacting with other transgender women. Those areas are also heavily patrolled by police making prostitution-related arrests.

“There is nowhere for them to go without risking arrest or transphobic violence,” Mogulescu said.

Police also target people with prior arrests for prostitution, according to the lawsuit, even if the prior charges were dismissed, creating a cycle of arrests and incarceration for transgender women, whether or not they are in the sex trade.

Red S. said New York officers have reported tank tops, bra straps and other “summer clothing” as reasons for suspecting someone of prostitution-related loitering, even when, in fact, they are not.

“It’s an age-old issue of courts and police victim-blaming,” Red S. said, whether the victim is a sex worker or a survivor of rape. “What were you wearing? Where were you? Why were you wearing that there?”

At last month’s committee meeting, Ervin said Chicago’s new ordinance reduces victim-blaming by providing an “affirmative defense” to those who can prove they were coerced into prostitution or trafficked.

“It puts the burden on the victim, further entrenching them in the legal system,” she said. “The trafficking defense creates undeserving versus deserving defenses. You’re a criminal without the defense, creating a dichotomy that’s not equal.”

She added, “It’s disappointing to see Chicago taking this approach now, after we’ve seen how harmful it’s been in New York.”