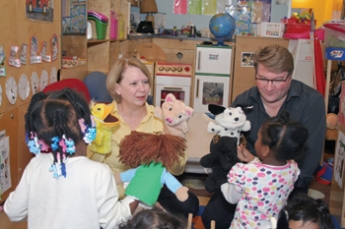 Ushering her crying toddler toward the door of the lobby, a mom soothed away the lingering effects of a playground squabble with one hand while gripping an occupied infant carrier with the other. Luckily, a whimsical animal mosaic caught the little girl’s eye and provided some much-needed distraction.

She gazed up, taking in fantastical, larger-than-life lizards, hippos, sheep and ducks that adorned the exposed brick wall. Pig-headed balloons drifted lazily over dangerously sharp cacti as snails watched from their perches on steep, grassy hills. Giggling, the toddler traced the creatures’ jewelencrusted scales, feathers and skin with a tiny finger. Her streaming tears stopped instantly.

End-of-the-day crankiness may plague countless other day care centers. But The Children’s Place Association in Humboldt Park is hardly a run-of-the-mill facility. Here, the common denominator among the children is not mommies and daddies with 9-to-5s. It’s HIV and AIDS that brings them together.

A nationally recognized leader in pediatric AIDS care, the nonprofit is a comprehensive social service agency that has supported hundreds of children affected by the disease since its inception in 1991. And Cathy Krieger, the association’s CEO, has been there to witness it all.

“Improve the present and secure the future–”that’s our goal,” she said, proudly surveying the scene unfolding near the jungle gym. Seven 3-year-olds sat in a circle with their outstretched legs, enclosing an area to keep a rolling ball. The class’s more rambunctious boys took to the trampoline or played hoops.

“If they didn’t come here, our babies and toddlers would be home, unattended to, not getting socialized, not getting the cognitive and emotional stimulation children require to develop,” Krieger said. “When a parent or caretaker is sick, it’s beyond daunting to put 100 percent toward your child’s well-being. And we can help by offering some familial stability and respite.”

As a one-stop shop for those touched by HIV and AIDS, The Children’s Place has a multitude of options for the 58 families it currently serves. The children registered in the wildly popular Head Start and day care center, which has a long waiting list, come to class from 8:30 a.m. to 3:30 p.m. five days a week. Students are bused from 17 different Chicago community areas and receive a dietitian-directed breakfast, lunch and two snacks free of charge.

“The more we can holistically address the extensive implications of the disease–”whether it’s the management of antiretrovirals or talking through how to disclose your health status to loved ones–”the more well-adjusted the family will be,” Krieger said.

Krieger sat down with The Chicago Reporter to discuss school readiness for at-risk kids, economic hurdles for the association and the alarming rate of infections among youth.

Why was it so important for the organization to include early-childhood services?

The parents and caregivers we’re working with–”they all live below the poverty line in addition to being sick. They have a lot of life stressors already. It’s hard for them to meet their child’s needs.

We’re tending to children who are ignored or rejected by other day care [programs]. Ninety percent of our kids who spend a matter of years with us move on from the program kindergarten-ready. That success rate might not seem incredible on the surface, but it’s actually really amazing. If we weren’t here, I don’t want to know what the number would be. It would be rock bottom. Without some degree of early childhood normalcy, these kids would go to school and not know how to pay attention or sit still. Or they wouldn’t have learned to temper behavioral issues and would have a meltdown at the drop of a hat. It puts them behind the eight ball for the rest of their lives.

We try to address everything that would provide obstacles to coming to school–”not just physical health. It’s not particularly heroic for a healthy, middle-class parent to get their kid off to school every day. But if you’re living in your third apartment that year or sleeping on a family member’s couch and your health is deteriorating, it’s a big deal to get your preschooler here. It’s Herculean to hold it all together.

Does The Children’s Place work with Chicago Public Schools to transition the children?

We know education is the ticket to success, so collaboration is important. By coming through our program, the kids get enrolled in the [Chicago Public Schools] system once they hit age 3. So they’re on administrators’ radar early on. And the process of getting individualized education plans going for these kids begins. Their needs are disclosed, and that way, teachers aren’t spending a semester trying to assess them before pinpointing the best way to reach them.

As for the confidentiality issue, we’re not advocates of disclosing to Chicago Public Schools, whether it’s the student or parent who is infected. Back in the day, school principals had to be notified when a student tested positive. Principals could tell other staffers on a need-to-know basis, and with the collegial atmosphere at a school, this news spread around even more. Can you imagine? Authority figures were letting your secret out. That’s highly stigmatized. That’s like a boss getting a call when an employee finds out they have HIV or AIDS. This is a barrier–”a deterrent–”to testing for adolescents. They choose not to find out for fear that their principal will hear about their personal business. And that has ramifications on infection rates if they’re sexually active and don’t know to take extra precaution.

Additionally, teachers and other staff can overreact. The AIDS Legal Council [of Chicago] had a situation where an HIVpositive student athlete got a bloody nose on the court, and the basketball coach was like, ‘Everybody back!’ It was made into a big ordeal. People are just still terrified of the disease and still have the misconception that it’s very easily contractible.

I’ve constantly thought, ‘Surely, we’re past it by now.’ But society hasn’t caught up to the science yet. We’ve been working on legislation for a couple of years to change the principal disclosure policy.

Are there moments that remind you why you do your job and renew your dedication to the cause?

One of the families that touched me the most was this gorgeous Latina who was infected by her boyfriend, who was also abusive. After he got particularly physical, she took off with her son in the middle of the night. But she had no place to go. Police put her in a shelter. She eventually got a job to start supporting her and her son, but she obviously had to put him in day care to do that. And she could only afford some skuzzy facility, and one day, she found out they’d leave her son in a disgusting bathtub that was supposed to be his playpen all day. Then she found out about us and enrolled him in our day program. When she first walked in and saw the place, she was like, ‘Oh, there’s light here, and it’s colorful and cheery!’ She’s always told us we were the bridge that got her away from a really dark place in her life. She got married to a great guy, and they moved the family to the suburbs. She’s teaching high school and is very vocal about her disease and hardships to all of her students. They even joined us at a rally we held to raise awareness.

How are you doing in light of the recession, government cutbacks and less charitable giving?

It was a tough year financially in 2009. We were just clobbered. We were several hundred thousand [dollars] in the red. For fiscal year 2010, which begins in July, we had to reduce our staff by 10 percent. At this point, it’s just a matter of trying to weather the storm. The organization can get through one bad year but not two.

Eighty percent of our funding is government grants, and 20 [percent] are private. We count on our big spring gala to bring in between $400,000 and $500,000. This year, we did $220,000, and we thought that was great given how tough this economy is. Now, we’re just trying to cast a wider net when it comes to securing funding. I think if more people knew about us and saw the results we’re able to get, the funding would come.

Looking at recent surveillance data, what do you see as a success and what’s still on your to-do list?

Back in the day, birth parents could count on transmitting the disease to their unborn children, and so many kids were born positive. That’s changed. Out of 60 kids in the early learning program here, five are infected. Once those kids hit adolescence, it comes with a vengeance. Not only were these families dealing with the challenges of normal angst and attitude and rebellion at that age, but you have the issue of making sure defiant teens are taking their medications–”which need to be timed very meticulously–” and being extra safe and precautious after becoming sexually active so they don’t infect their partners. And we really want to help steer families through that tricky time.

Illinois Department of Public Health statistics are placing 30 to 50 percent of new infections in the 13- to 24-year-old age range. In 2000, 10 percent of those HIV positive were 13 to 24. Nine years later, it’s 20 percent. It’s obvious whatever prevention messages we’re trying to get out are not getting through with this group.