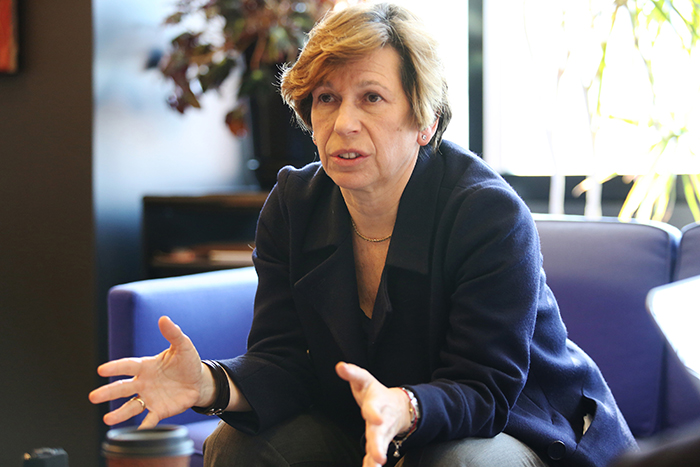 American Federation of Teachers (AFT) President Randi Weingarten was in Chicago on March 24 to deliver the annual “Distinguished Labor Leader Lecture” at Illinois Institute of Technology’s Chicago-Kent College of Law.

Weingarten and the 1.5-million member AFT made national news recently when Weingarten announced the union would no longer accept money from the influential Bill & Melinda Gates Foundation for the AFT’s Innovation Fund. In this interview with Catalyst Chicago Associate Editor Melissa Sanchez, Weingarten talked about that decision, Chicago’s test boycott and charter union movement, teachers’ distrust of the Common Core and what can be done about it, and whether Chicago Teachers Union President Karen Lewis should run for mayor.

(This interview has been condensed.)

Catalyst Chicago: So while it might seem like there’s never a dull moment in the Chicago education world, you’ve come at a particularly interesting time. What do you think of last week’s announcement that the district will “turn around” three more schools?

CC: Also last week, the CPS legal department interviewed children without their parents’ consent as part of an investigation into some teachers’ decision to boycott the ISAT standardized test. Some parents say they feel their kids are being used as pawns in a political fight. How do you think this will end?

RW: First off, in the two schools where you had teachers actually boycott the test, they voted to join a parent-led boycott of the ISAT. This boycott started with parents, not with teachers. Those teachers were listening to the will of parents — something that the school system should be listening to as well, not trying to interrogate parents’ children without parents’ knowledge. The issue here is: why do you even have an ISAT when everybody believes that test is unnecessary and irrelevant? This punitive action makes no sense. Frankly, people should be crediting the teachers for saying they want that time to actually work with kids.

CC: Earlier this month you announced that the AFT’s Innovation Fund will no longer accept money from the Gates Foundation because so many of your members don’t trust how the Common Core State Standards have been implemented. Are there other funders that members are asking you to reconsider accepting money from?

RW: I think this is a very unique issue. When the Broad Foundation seemed to be on the path of closing schools and stripping teachers of rights as opposed to working together and helping kids succeed, we also said we weren’t going to solicit funds from that foundation. The other major foundation here is the Walton Family Foundation, which doesn’t even pretend to respect workers. Look at what they’ve done in their own worksites throughout the country, stripping our kids’ parents – the people who work for them – of decent wages, of health security, of retirement security. So they don’t even pretend that teachers are an important part of this equation. And the third major foundation in this arena is the Gates Foundation.

I think that there are things that the Gates Foundation has done that are good, and I think there are things the Gates Foundation has done that need to be rethought. But regardless of what I think, the trust with your members is of paramount importance. So when they are so deeply distrustful of a foundation, one needs to listen to them. Even though we don’t believe that the foundation influenced our policymaking, the perception is more important than the reality. And so the line we drew is to say that prospectively, on something so important like the Innovation Project, where folks are trying new things and innovating and take different risks, we would look to replace that funding with members’ money.

CC: Do you think members will be willing to pay more in union dues to offset that loss?

RW: What we’ve said in the proposal that would be at our convention is that we’re asking for 5 cents per member per month to fully replace the funding we got from the Gates Foundation. It was a statement that said that the membership’s deep concern with what’s happening in schools today is more important than anyone’s grant money.

CC: What do you think it will take to reduce the overall distrust teachers have of the Common Core standards? Is it even possible?

RW: Look, in a place like California, there isn’t the deep distrust because California did two things: First, they decoupled it from testing. They didn’t do it permanently, but they also targeted resources for people to be comfortable with the transition. So there is much more openness to a transition to these standards that most people believe have real promise. If you think about schooling as fundamentally three things – how do you help people develop relations with each other and with adults; how you help kids apply knowledge, not just “know things”; and how do you help kids confront adversity and get up when they stumble — then a transition to standards that are embedded in critical thinking and problem-solving is important. Common Core is not the only way of doing it. The problem [arises] when people think this is more about testing and measurement and reducing kids to an algorithm as opposed to the process of teaching and learning. Teachers get the difference.

CC: Teachers and staff at one of Chicago’s biggest networks of charter schools ratified their first labor contract last week. The local that negotiated the agreement is part of the AFT. How important are organizing efforts at charter schools for the AFT?

RW: They’re very important. In a city like this, where charter schools are a reality, teachers are teachers. They want a voice at work, whether they’re in a charter school or whether they’re in a traditional public school. They want to be part of helping kids succeed. They want to get the tools and conditions they need and decent pay for it. When you’re all rowing in the same direction, as the UNO contract suggested, then what happens is, we have a chance to help more kids. When you have huge polarization, you’re constantly in the conversation about who’s right.

Public education is how we help all kids succeed, not how do we try to eliminate each other. What you’re seeing in too many places is a ruse of austerity to justify starving schools. There’s just this constant drumbeat that public schools are bad. It creates this Catch-22 circle of starve the schools so they don’t have the funding that they need to help kids, particularly poor kids, so that it’s open to other alternatives, which then take the public dollars. And ironically, these other alternatives actually have been around for 20 years and they haven’t done any better than the public schools. And the public schools are the schools that have the accountability, the transparency, and also the public voice.

CC: CTU President Karen Lewis may be the most public adversary of Chicago Mayor Rahm Emanuel. Many of her followers would love to see her run against him in next year’s mayoral race, although she’s suggested that won’t happen because she’s not a politician and her husband has said “no.” Do you think she should give it a shot?

RW: I am not … (laughs). Karen is a fantastic leader of our union. Most of us love doing the jobs we are doing, which is representing educators who want to make a difference in the lives of children and working with parents and communities to make a better life for those children.