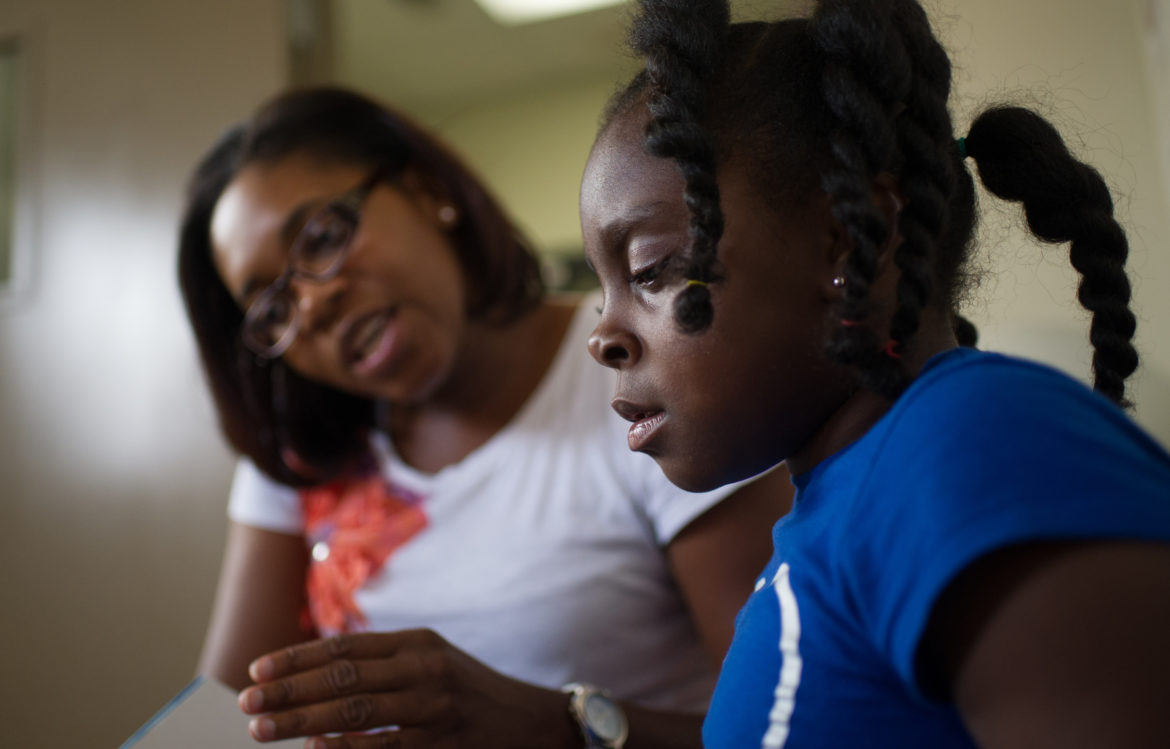 Lenita Edgeworth takes time during her lunch break to visit and read to her 8-year-old daughter Ellie at Channing’s Child Care Academy, in the Austin neighborhood, on August 27, 2015.

When Lenita Edgeworth moved from Chicago to Oak Park in January 2014, she soon started searching for a top-notch day care for her 1st-grade daughter, Ellie.

She already had found a place for Ellie to go before and after school during the school year, and now she needed a place for the summer. The single mom looked up all the daycares in and around Oak Park, then chose eight to visit. She talked with directors, teachers and other parents. She even checked out the vans the daycares used.

Eventually, she chose Channing’s Child Care in Chicago’s Austin neighborhood, near the city’s border with Oak Park. She described it as “homey,” and it had exactly what she needed: transportation, convenience and hot meals.

“When you first come in, you see the teachers, who almost look like grandmothers, and the whole set-up was real nice,” Edgeworth said.

Then last November, Edgeworth lost her job as a case manager at Bethel New Life. She was unemployed for six months and took her daughter to and from school herself during that time. She finally found work in April but the job — driving patients to pharmacies for a medical transportation company — paid nowhere near what she used to make. Summer was coming, and she worried she wouldn’t be able to afford Channing’s again.

But there was a silver lining: Her smaller paychecks made her eligible for the state’s Child Care Assistance Program (CCAP), which subsidizes child care costs for low-income families. CCAP reduced her monthly payments from $200 and $600 — depending on the time of year and services needed — to a $57 co-payment.

Edgeworth wants to leave her current job and return to the social services field, but a quest for upward mobility is a risk she’s not sure she wants to take. Under CCAP rules, if she were to end up out of work for more than 30 days, she would have to reapply. However, under new emergency rules imposed by Gov. Bruce Rauner in the absence of a state budget, Edgeworth would no longer be eligible.

(Some recipients, including those with children with special needs and teen mothers, are excluded from the new income cap.)

Child care advocates say the emergency rules will lock out an estimated 90 percent of the more than 5,000 previously eligible families. According to some estimates, the numbers could be even higher. In fiscal year 2013, the most recent for which data are available, 6,409 families statewide received CCAP benefits each month, according to the Department of Human Services (DHS).

“People have to make impossible choices,” said Megan Meyer, a spokesperson of the Ounce of Prevention Fund, an early childhood advocacy group whose president is the governor’s wife, Diana Rauner. “They have to decide to give up a job they’ve just gotten. They have to patch together care plans for their kids – my sister today, my neighbor tomorrow.”

As more families find out that they’re not eligible for CCAP, some childcare centers – which have yet to receive any CCAP payments in the new fiscal year – likely will see declining enrollment.*

Cerathel Burnett, CEO of the Carole Robertson Center for Learning near University Village, which serves children 5 and under, says her organization has built up enough reserves to stay afloat but that they still feel the negative effects of the emergency rules. She says she has had to deny four out of every five families who have applied since July 1.

Burnett says she understands the urgent need to remedy the state’s dire financial situation but not when it comes at the expense of families. She described how a mother applying to her center wanted to cut her work hours in half in order to get below the threshold for benefits.

Burnett’s main concern, however, is that even if the CCAP changes go away, the damage may have already been done.

“We will fill the spots with kids who meet the requirements, because that’s our bottom line,” Burnett says. “When the system rights itself, I might not have more spots and other organizations may not have survived. That’s the piece that keeps me up at night. These families will find fewer and fewer options. Where will they go?”

The new cuts follow a succession of day care funding woes dating back to February, when DHS announced it couldn’t afford to fund the day care program through the end of the fiscal year, June 30. The Legislature then came through.

Now, advocates for early childhood education are trying to undo the emergency rules they say could have disastrous effects on Illinois’ young children and their families.

“This isn’t affecting a few families here and there. We see this as a backdoor way to cut the legs off this program,” says Kaitlin DeCero, a spokeswoman for the Service Employees International Union Healthcare Illinois, which represents home care providers. “The idea that low-income parents are being targeted: It’s draconian and it’s unfair. Childcare is the last thing we should be cutting.”

Sessy Nyman, the vice president of policy and strategic partnerships at Illinois Action for Children, says their “best bet” for blocking the emergency rules came on Aug. 11, when the Joint Committee on Administrative Rules (JCAR) reviewed them. However, the committee let the emergency rules stand, arguing that the rules are needed to manage finances without a state budget.

Another avenue is a bill due for a House vote in September, which would prevent such rules from being imposed in the future. Advocates say they’re working to make the law retroactive.

Illinois Action for Children also filed a complaint with DHS and JCAR to investigate the new rules’ legality. Four other groups joined: Children’s Home and Aid; the Ounce of Prevention Fund; Sargent Shriver National Center on Poverty Law; and Voices for Illinois Children.

Back in Oak Park, Edgeworth says she will still keep her daughter in the same child care program even if she loses her CCAP benefits. She says she’ll find a way to pay the higher cost.

*Editor’s note: This article was updated on Friday, Aug. 28, 2015 at 5:15 p.m. to remove reference to enrollment information about It Takes A Village Early Learning Center that was provided by an employee who no longer works for the center, after a co-owner of the center disputed the information.