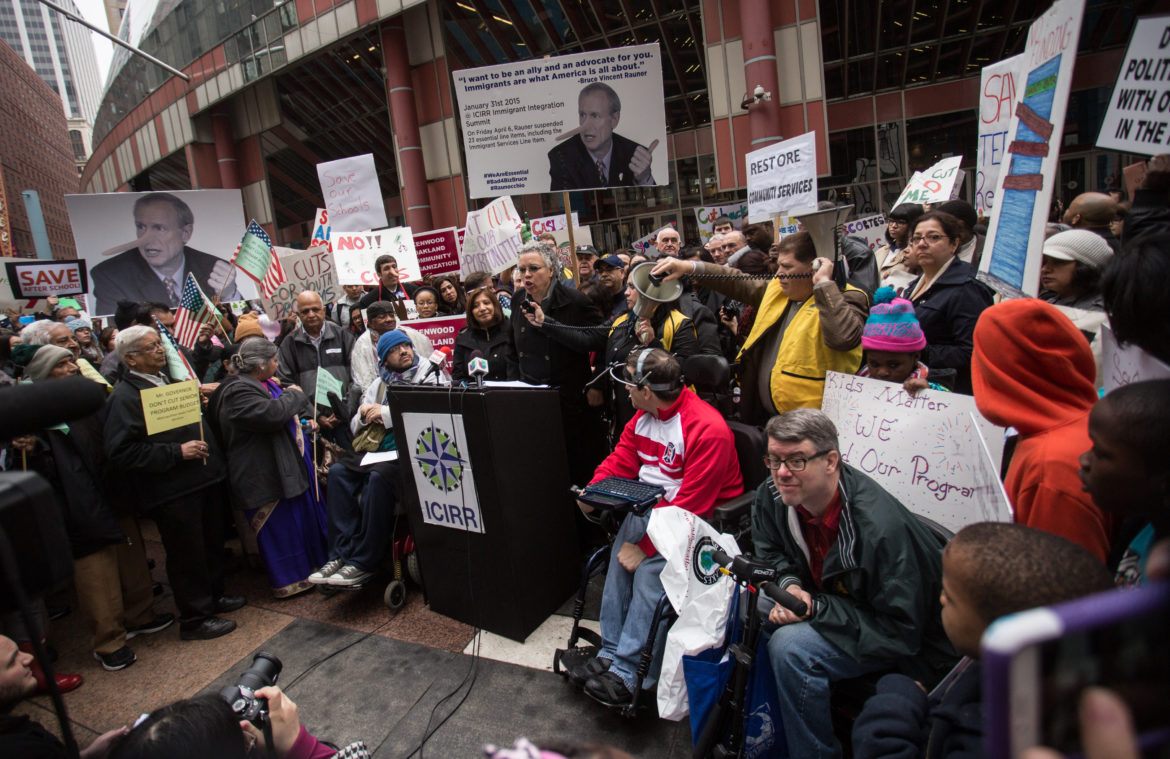 The Illinois Coalition for Immigrant and Refugee Rights rallied against Gov. Bruce Rauner's budget cuts at the Thompson Center on April 8. Cook County Board President Toni Preckwinkle spoke at the rally.

When they elected Bruce Rauner governor last year, Illinois voters thought they were getting a straight-talking businessman who would straighten out the state’s finances.

On the evidence of his first three months in office, what they got was an ideologue who would sacrifice fiscal realism on the altar of his radical agenda of shrinking government and gutting unions.

Straight-talking? He’s certainly outspoken when attacking unions and his political opponents. But when it comes to budget matters, not so much.

Start with the $1.6 billion gap in the 2015 budget that Rauner says he “inherited.” In fact, it was essentially his call to let the mid-year rollback of the state’s income tax proceed. He had a major hand in creating the immediate crisis. Now he hides behind it.

When it came time to fill that gap, it turned out that Rauner didn’t believe his own campaign rhetoric about excessive spending. As Ralph Martire of the Center for Tax and Budget Accountability points out, he turned to revenue — $1.3 billion in sweeps of special funds — and even said he wanted more sweeps and fewer cuts.

To address a $6 billion shortfall resulting from the income tax rollback in next year’s budget, Rauner included $2.2 billion in savings from a heavy-handed pension reform plan, which would be politically, legally, and practically impossible to implement within the coming budget year.  So while he declared his proposal an “honest budget,” it was anything but.

Rauner proposed cutting Medicaid by $1.5 billion, half from reimbursements to safety-net hospitals; cutting state revenue to towns and cities by half and cutting support for state universities by a third. He also proposed cutting community care for people with disabilities, trapping many in more expensive nursing homes; cutting substance abuse, mental health and violence prevention programs; eliminating support for state wards over 18 years of age, children with autism or hemophilia, homeless youth, afterschool programs; and on and on. It’s scary.

The truth is Rauner welcomes the fiscal crunch, and has little motivation to address it directly, because it “creates leverage,” as he told the Chicago Tribune. “And we’ve got to use that leverage of the crisis to force structural change.”

So rather than negotiating a budget deal in Springfield, he’s barnstorming the state to promote his so-called Turnaround Agenda, which includes local right-to-work zones, reductions in workers comp and unemployment insurance, bankruptcy for municipalities, draconian pension reform — oh, and a 25-cents-a-year minimum wage increase for seven years, but not unless the other items are done first.

Rauner has said he won’t consider revenue options — either expanding the sales tax or closing corporate tax loopholes — until his agenda is enacted. (Meanwhile he approved $100 million in corporate subsidies.) But no one thinks the Democrats are going to pass Rauner’s wish list. It’s hard to see how this ends, though legislators can probably count on earning some overtime pay this year.

At this point, all Rauner has accomplished is some tax savings, particularly for himself and his wealthy friends. More than half the savings from the tax rate rollback went to the top 12 percent of the state’s taxpayers, with “millionaires do[ing] particularly well,” according to the Center for Tax and Budget Accountability. Rauner himself will keep $750,000 more because of it.

Clearly his top priority — maybe his only priority — is getting rid of unions. He reportedly told Democratic legislators in a private meeting that if his policies are implemented, “union membership will be eliminated in Illinois within four years.”

The idea is the state will be “competitive” if we get wages and taxes down. (To follow this logic, you have to ignore the fact that Illinois is not a high-tax or high-spending state, or that it ranks among states with the most regressive tax structures.)

There’s not much evidence for this theory. Businesses grow when demand for their products and services grow. Demand grows when consumers have more to spend. It’s elementary, and data backs it up. Last year employment grew at a higher rate in 13 states which raised their minimum wages at the beginning of the year. And not only do tax revenues go up, but government spending goes down as low-wage workers rely less on public support.

As for right-to-work laws, they reduce income and benefits, particularly for black and Latino workers — and according to a study, they would shrink state income tax revenue in Illinois by $1.5 billion. Nor is there evidence they would grow jobs: As of a few years ago, eastern Illinois counties had significantly lower unemployment rates than counties just across the border in right-to-work Indiana.

Unions are on the defensive, and Democratic politicians are protecting their own favorite programs. Rauner’s narrative — the state has to cut its way out of its difficulties, and unions are the problem — is setting the terms of the debate. What’s needed to counter that is a broad vision of how to create and sustain bottom-up prosperity.