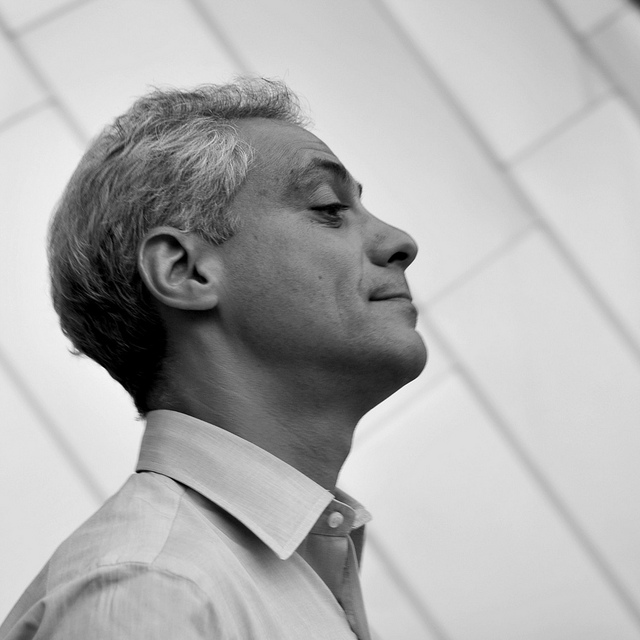 Mayor Rahm Emanuel has inserted well-worn policies into the re-election remake of his political persona and claimed credit for issues that grassroots activists have been pushing for years. [Flickr photo courtesy of Viewminder]

Rahm Emanuel, who turned 55 last week, is old enough to remember “The Six Million Dollar Man.”  And now he’s taking the 1970s TV series as a model for his campaign.

The premise of the show was that after suffering devastating injuries in an aircraft crash, an astronaut played by Lee Majors gets a complete remake with bionic body parts that make him unbeatable to all kinds of bad guys.  Total cost of his rehab: six million dollars.

Emanuel’s political fortunes have crashed over school closings and his strong tilt toward the interests of rich folks.  So he’s taken his political persona in for a total overhaul, replacing a variety of long-held positions with new ones designed to make him electorally impregnable.

Total cost is expected to range upwards of twice Majors’ remake.  With campaign contribution limits lifted, Emanuel is certain to top the $12 million he spent on media in 2011.

There are two big differences: First, Majors was stuck with his body, and Emanuel can apparently switch policies at will.  Also, Majors got brand-new parts (legs, eyes and one arm); Emanuel has inserted well-worn policies and claimed credit for himself on issues that grassroots activists have been pushing for years.

The latest renovation, of course, is a hike in the minimum wage.  Anathema to many of his staunchest supporters (including Governor-elect Bruce Rauner), the issue has been pushed for years by a coalition of labor and community groups.

Emanuel held back when progressive aldermen introduced a minimum-wage increase targeting large corporations in May, but with polls showing voters view the mayor as “not in touch with people like you,” he eventually backed a blanket increase to $13 by 2019.

That’s what the City Council enacted Tuesday. The measure was probably just as important a cover for pro-Emanuel alderman fighting off challenges from independents.

Advocates applaud the new ordinance, calling it a “good first step,” and vowing to keep “fighting for 15.”  They also point out that Emanuel has done nothing to head off a Springfield move to lock in the city’s wage at $13.

Asked if the measure provided a political boost to the mayor, one long-time activist said, “I can just see the commercial.”  Emanuel’s people will find some minimum-wage worker somewhere to say nothing was happening until Rahm came along.

That kind of approach caught flak from community and environmental activists when Emanuel’s first ad gave him credit for shutting down two coal plants.  He did shut them down, but that was nearly a year after an ordinance that would have restricted carbon emissions was delayed at Emanuel’s request — despite its support by a majority of aldermen — so Emanuel could claim credit later, the Chicago Reader’s Steve Bogira writes.

And as 11th Ward aldermanic candidate Maureen Sullivan points out, “What Mayor Emanuel’s commercial doesn’t mention is that during the first year of his term, he had activists who were protesting the coal plants arrested.”  Not only did activists feel it was necessary to keep the pressure on; you can’t say whether Emanuel would have acted if they hadn’t.

Now there’s a commercial out touting a turnaround at City Colleges of Chicago.  One CCC teacher I spoke with called it “a hoax.”

The commercial features City Colleges Chancellor Cheryl Hyman, a non-educator imported from the corporate world, who boasts that CCC has doubled its graduation rate.  That’s true — though it only applies to first-time, full-time students — and it translates into an increase from 2,000 graduates in 2011 to 4,000 this year, in a system of over 115,000 students.

It turns out that nearly two-thirds of the increase results from herding students who’ve been accumulating credits by taking courses for personal enrichment into the Associates in General Studies program.  AGS degrees have shot up from 164 awarded in 2010 to 1,414 this year.  The problem is, according to CCC, the degree “is not designed for transfer or as an occupational degree.”

What we have here is a laser focus from top leadership on a statistic that is most meaningful as a talking point.  In addition, whatever gains are attributable to CCC’s “reinvention,” it’s worth noting the effort was in place before Emanuel was elected.

The obsession with graduation rates ignores the historic mission of city colleges, which is providing affordable access to higher education — with thousands of CCC students earning credits that they transfer to four-year institutions or taking just enough courses to get a better job.

Now, in another top-down dictate apparently designed to move numbers, students who test into developmental English and math courses are being pushed into college-level courses.  It’s called the Accelerated Learning Program, and it’s supposed to increase completion rates.  Unfortunately, students who fail the tougher classes could lose access to federal financial aid.

There are many issues facing City Colleges — including whether new job-training programs will do better than similar efforts in the past at meeting the needs of students and employers.  Another question is how the mayor can continue to call City Colleges “a ticket to the middle class” when the system’s adjuncts — who teach more than half the classes — earn poverty wages.

But in Emanuel’s world, everything’s coming up roses.

What’s next?  Well, for one thing, Emanuel could certainly use an immigration-rights implant.  It could feature U.S. Rep. Luis Gutierrez, an exemplar of opportunism ever since he split from the Harold Washington coalition to back Richie Daley for mayor in return for a seat in Congress.

Last week Gutierrez credited Emanuel with playing a key role in lobbying the Obama administration for the recent executive order reducing deportations.  “It’s very helpful to have the mayor of the city of Chicago so focused and so helpful and so knowlegeable,” he told the Sun-Times’ Natasha Korecki.  “He’s been so positive, so helpful, both publicly and privately.”

It’s only a 30-second commercial, so they’ll probably have to leave out Gutierrez’s remarks four years ago, when he said Emanuel “took actions to harm immigrants” in Congress and the Obama administration.

“He has not stood up for immigrants,” Gutierrez said of Emanuel at the time. “He has not moved comprehensive immigration reform forward. He has not made the right decisions, he has made political decisions. That’s not what the immigrant community deserves in the next mayor of the city of Chicago.”

Back in 2010, the consensus in Washington was that Emanuel was the main obstacle to immigration reform in the Obama administration.  As a congressional leader, he’d urged Democrats to avoid the issue, calling it “the third rail of American politics.”

A new profile as an immigrant-rights supporter would cost tens of thousands of dollars worth of airtime on Spanish-language stations.  But no policy upgrade is too expensive for the Twelve Million Dollar Mayor.