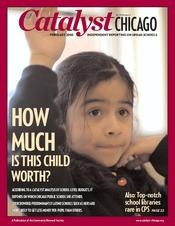 This 2005 Catalyst In Depth looked at the issue of per pupil budgeting.

When CPS presented its 2013-14 budget last month, officials touted the new student-based budgeting as a way to distribute money to schools more equitably.

Schools would receive a certain amount of money for each child rather than a certain number of teachers, which traditionally has been one for about every 30 children.

This formula would apply to core school funds — between $4,140 and $4,400 for elementary school students and $5,132 for each high school student. The core allocation is about half of a school’s total allocation. Schools also receive state and federal poverty funds, and money for special education, bilingual education, facilities and lunchroom operations.

Charter schools have always received their money on a per-pupil basis; now, district-run schools would join them. Yet advocates for each side contend the other is coming out ahead. And advocates who study CPS budgets decry the lack of information on a large part of charter school funding.

“We don’t know what makes up the bulk of the difference between charters and other schools,” says Rod Estvan of Access Living, a disability rights organization. “There are too many possibilities and too many unknowns.”

On Tuesday, Estvan released his annual budget analysis, which examines student-based budgeting and how it affects special education students in charters and neighborhood schools.

In an earlier report, the Civic Federation also called for more transparency in charter school funding.

Charters appear to get more

Judging from the entire allocation to each school, charter schools appear to have the advantage: More than 70 percent of charter schools are getting the same amount or more for each student than they did last year, a Catalyst analysis shows. Meanwhile, only about 10 percent of district-run schools are holding steady or seeing an increase, and most of those are welcoming schools that got extra resources under the district’s school closing program.

Andrew Broy, president of the Illinois Network of Charter Schools, says that whatever advantage charter schools look like they are getting is because they started out behind.

Last year, under an agreement with the Gates Foundation, CPS increased charters’ per-pupil funding by 5 percent to bring them more in line with regular schools. Even so, says Broy, charter elementary schools were a bit underfunded, while high schools were “about right.”

This year, he says, charter high school directors are reporting that they have less money.

“There is a wide variance,” he says.

Increases aside, charter schools are getting, on average, $600 for elementary schools to $900 for high schools more per student in their total allocation than district-run schools get, the Catalyst analysis shows.

Broy says that’s because many services for district-run schools come out of the CPS central office budget, not school budgets. CPS spends $1.6 billion on central, citywide services, such as social workers and psychologists, and network offices, Broy notes, but charter schools do not receive any of those services.

“If we call the general counsel’s office and say we have a legal problem, they won’t help us,” he says.

Though CPS funding for charters and district-run schools is increasingly similar, continued differences complicate comparisons between the two.

Here are some of the factors:

CPS budget director Ginger Ostro says CPS calculated the cost of these staff and services and then provided an additional per-student stipend for charter schools. This benefits some charter schools, especially larger ones, but to others it could be to a detriment, Ostro says.

The CPS budget book pegs the cost of such services at $775 million but adjusts the pot to $705 million to account for school budget cuts CPS made to address the CPS deficit. This is the money that Estvan and Chicago Teachers Union researcher Pavlyn Jankov question. It is a “huge problem” that CPS does not spell out what the $705 million includes, Jankov maintains.

On top of their allocation of the $705 million, each charter also got about $550 per student for other administrative staff like the principal, and another $100 per pupil to help offset the salaries of veteran teachers who make more than the average district salary.  (Only about a third of district-run schools got extra money for veteran teachers.)

At each regular school, CPS covers the cost of a principal, assistant principal and clerk regardless of how much they are paid.

This year, for both charter and district-run schools, the pension cost is part of the core allocation for teacher salaries. This means that all schools will have to dip into their own budgets to pay the employer share, which CPS estimates at about 10.6 percent of each certified teacher’s salary.

For charter schools, it feels like a budget cut.

SPECIAL EDUCATION–Under the Gates agreement, CPS promised it would “equitably” reimburse charters for special education student services. Charters have long complained about CPS paying only up to $65,000 for each special education teacher, when most cost more.

Under the Gates Compact, CPS promised to reimburse charters for the entire teacher salary, unless it is deemed excessive. This resulted in an increase in the amount CPS is paying for charter school special education last year and again this year.

Further, charter schools are at a bit of an advantage in another area pertaining to special education students.

Estvan’s analysis shows that schools will not be given the full per-pupil rate for severely disabled students. Under a weighted formula, they are counted as 43 percent of a whole child. The reason, according to the CPS budget book, is that “so much of their instruction is provided by special education teachers, which are funded outside of student-based budgeting.”

“Some students with disabilities attending CPS are going to be worse off with this approach,” Estvan says in his report.

He fears that these two things will deter principals from taking in severely disabled students.

Over all though, says Estvan, the biggest problem with the CPS budget is that it doesn’t have enough revenue. CPS needs more money, he says, and should be advocating for a property tax increase above the tax cap, a statewide financial transaction tax and a graduated income tax.

The Board of Education is set to approve the budget on Wednesday.