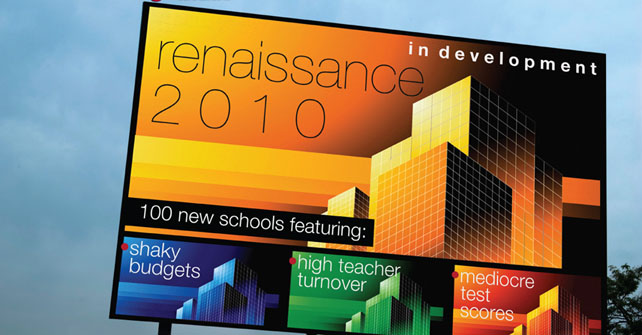 With great fanfare, Mayor Daley announced the creation of 100 new schools, mostly charters,  to replace existing failing schools. Backed by the business and philanthropic communities, the Renaissance 2010 project pledged to open only high performing schools.  The effort ran into immediate trouble from parents, community groups and the CTU upset by school closings. Funding took time to materialize, as did teachers and principals capable of starting up new schools. CPS persisted with the Renaissance 2010 project, claiming that the new schools would drive improvement throughout the school district.  CPS was supported by the Renaissance Schools Fund, a private fundraising and strategic partner formed by the Civic Committee of the Commercial Club of Chicago and which helped raise $70 million for the project.

By 2010, CPS had created 92 Renaissance schools, yet just 16 of the schools were performing at or above state averages on the ISAT. Depressingly, 3 out of 4 CPS students still attended low performing schools. CPS acknowledged that new schools were not the main catalyst for systemwide improvement. Yet the closure of 50 schools in 2013 did not stop CPS from continuing to approve new charter school applications.

Superintendent Barbara Byrd Bennett placed a moratorium on closing more schools and on charters moving into closed CPS buildings. Now that she is on leave, CPS is making noises about permitting charters to move into closed buildings — if a community requests the move. Northside high school principals are already organizing to protest the move to place more charters in their boundaries. Expect the issue to become part of teacher contract negotiations in some way.