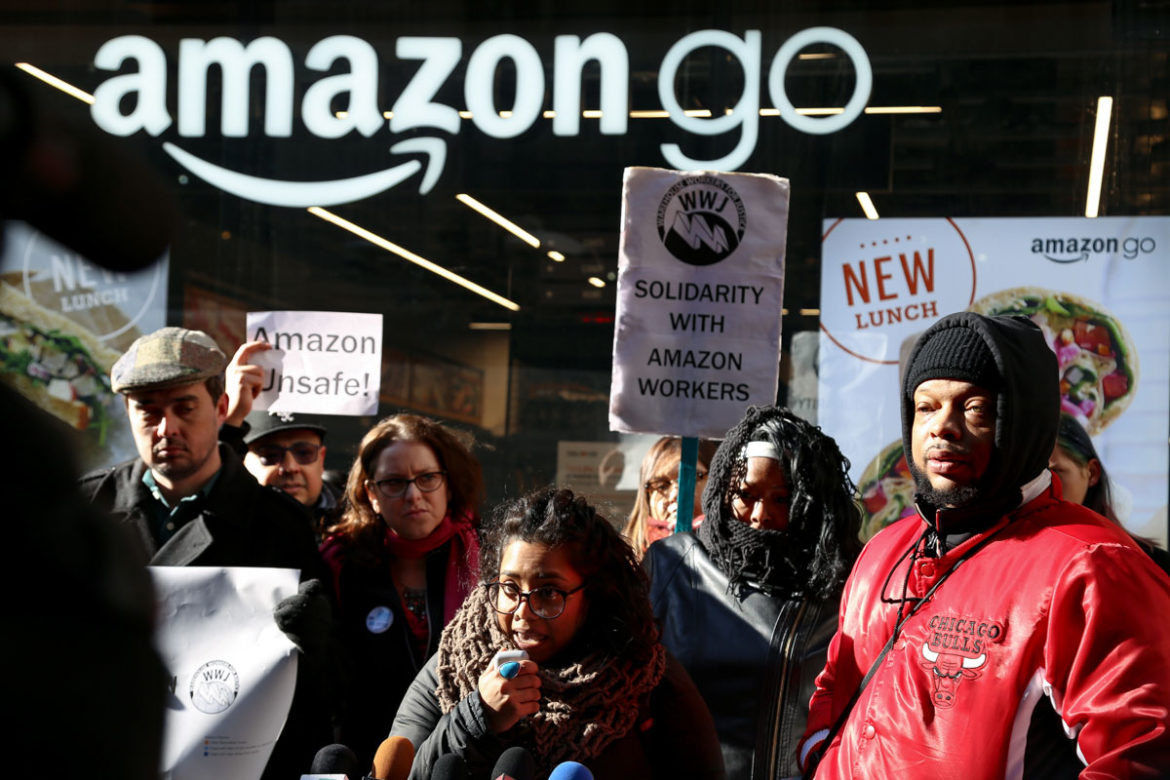 Warehouse Workers For Justice called for Amazon to reduce demands on workers and safer workplace conditions at a downtown Amazon Go location on Dec. 10, 2019.

During this gift-giving season, many of us will make use of same-day or next-day delivery options by e-commerce behemoth Amazon, and we’ll marvel at the convenience of it all.

In the back of our minds, though, we’re dimly aware that there may be problems with this business model.

Just in time for the holidays, a blockbuster investigation by Reveal for the Center for Investigative Journalism shows that “the company’s obsession with speed has turned its warehouses into injury mills.”

The rate of serious injury in Amazon facilities — those generally requiring time off the job, and sometimes causing debilitating disabilities — is more than twice the national average for warehouses, according to the investigation. And the injury rate goes up even more in the weeks before Christmas.

According to Reveal, “The root of Amazon’s success seems to be the root of its injury problem, too: the blistering pace of delivering packages to its customers.”

That’s certainly true in Will County, southwest of Chicago, where Amazon is now building its sixth warehouse. Due to connections between interstate highways and rail lines, the region is the second largest inland port in the nation.

Safety records obtained by workers at the Amazon fulfillment center in Monee in Will County show that over 10% of its workers suffered injuries last year, and 40 were injured so badly that they couldn’t return to work, often sustaining permanent disabilities, according to Warehouse Workers for Justice.

The records show that injuries in Monee dramatically increased in November and December last year, according to the group.

Amazon told Reveal that its high injury rates reflect improved reporting, but the former head of the federal Occupational Safety and Health Administration called the risk of work injuries “unacceptably high.” And one former Amazon safety inspector told Reveal, “When you order something from Amazon and you’ve worked inside Amazon, you wonder, ‘Hey, is ordering my package going to be the demise of somebody?’”

Far from improving working conditions, automation actually seems to be increasing the injury rate, said Roberto Clack, associate director of WWJ, which organizes workers in the logistics industry in Will County.

Instead of replacing human workers, robots are being deployed to increase the workloads and work pace — delivering items to be selected and packed by workers at ever faster rates — while new surveillance technologies allow Amazon to track its workers’ every move, Clack says.

Injuries have gone up significantly in warehouses where robots are being used, according to Reveal; in one warehouse, the injury rate quadrupled after the introduction of robots.

The group is one of dozens that are part of Athena, a new national coalition — including labor, environmental, civil rights, digital privacy, and anti-trust organizations — aiming to make Amazon accountable and build an economy that serves the public. (The group’s name, taken from the goddess of wisdom, law, and justice, represents a contrast to the image of oversized, bloodthirsty Amazons in Greek mythology.)

“Billionaire corporations like Amazon rig the rules so only they can prosper,” according to Athena’s mission statement.  “They threaten our ability to earn a good living and live a good life. “We are joining together to stop Amazon’s growing, powerful grip over our society and economy.”

In addition to worker’s issues, Athena’s concerns range from the impact on climate change of Amazon’s vast shipping network to the impact on state and local budgets of huge tax subsidies granted to the company.

In Illinois as of 2016, according to the Amazon subsidy tracker by Good Jobs First, the company has received $83 million in state and local tax breaks for various distribution centers in Illinois. In fact, Amazon’s business model requires it to build distribution centers near population centers; it makes little sense to give exorbitant tax deals to underwrite such developments.

Meanwhile, taxpayers also subsidize the company’s low wages — and, therefore, its profits. A new study of LA-area Amazon warehouses found that the average full-time employee, working 40 hours for 52 weeks, received over $5,000 in public benefits, including subsidized health care, housing, and food stamps. For every dollar Amazon pays its workers, according to the study, the government pays an additional 24 cents.

Athena isn’t calling for a boycott of the company. Clack said consumers can become informed and help support efforts to rein in the company. He points to the campaign of organizing and public pressure that forced the company earlier this year to raise its minimum wage to $15 an hour.

The Economic Roundtable has recommended that Amazon raise its minimum wage to $20 an hour, provide childcare, and invest in affordable housing. Already this year, protests from workers forced the company to reverse course and adopt a plan to become carbon-free. WWJ wants the company to stop sacrificing its workers’ bodies for its bottom line.

So far, the company has been “too big to govern.” Perhaps with a broad range of activist groups working together ­– and with broad public support – Amazon can be brought to heel.