On Feb. 22, Andrew Rotherham and Joseph Palumbo kicked off the 2007 Chicago Schools Policy Luncheon Series, which is focusing on “Making School Autonomy Work for Children.” Here are some of the highlights. To listen to their full presentations, go to www.catalyst-chicago.org and click on “On the Air.”

Andrew Rotherham is the co-founder and co-director of Education Sector, a new national think tank; a member of the Virginia State Board of Education; and the lead commentator on the influential “Eduwonk” blog.

ON MONEY AND RESULTS

We spend half a trillion dollars on public K-12 schools each year. That’s like the GDP of Poland or Ukraine, which are not insignificant countries. Marginal investments, marginal changes, small things, putting more money into the same things is not going to leverage change. Second, we’re going to have to have some hard conversations in our field about repurposing some of the money we’re spending now.

What do we get for this? High variance and uneven outcomes. It’s an accident of birth where kids end up.

I’m not here saying we need to run schools like private business. That’s way too simplistic, because in education you have a public interest and a private interest, and we have to marry them.

There’s been a big push for standards in accountability, systemic reform. You also have another crowd that’s arguing for market reforms. They say the best way to have accountability is simply to give people choice.

So why more autonomy? A couple of things: People want mass customization. They want to see 20 kinds of cereal, and they want it in education. People want institutions to change faster. Our most successful non-profit enterprises, like Habitat for Humanity, are agile. They are networked. They are results oriented. They embrace dynamism and change. They emphasize productivity, and they emphasize customization of the services that they’re delivering.

Now again, that’s not to say that we want schools to just be like businesses. First of all, we work in a political space, not an economic space. Second, consumer information is often lacking, or it’s in a form that’s not useful for consumers. Third, there are significant externalities in education. It’s not solely, and you can even argue it’s not even primarily, a private good.

Julian Betts, a terrific researcher in California, had a very funny way of saying this: He said, we’ve been at market reforms in education for 15 years, and I think the lesson is, the invisible hand is raising its middle finger.

There is high variance in outcomes, and there’s a couple reasons for that. It’s hard to run a school. Second, authorizing. For a long time, people had no sense of what was a good school, what was a bad school, what did a lousy plan look like. Third, oversight. There hasn’t been sufficient oversight in a number of states. Charter school authorizing is the key link here. Low-performing charter schools are not a randomly occurring phenomenon.

So the lesson is, autonomy does not mean doing less. It does not mean handing [schools] off. It means doing different. It is re-regulation.

The notion was, if the school is lousy, parents won’t go there. Well, that’s proven not to be the case—the invisible hand and the middle finger. Above all, parents want their kids to be safe, and they will fight tooth and nail to keep a lousy school that’s at least safe. The policy lesson, paradoxically, is that the way to deal with low-performing schools is to have more schools, so parents have more options.

ON PARENTS, DISTRICTS AND UNIONS

Parents are going to have to start thinking like consumers. You’re starting to see different services come on line to help parents think about that. That’s in its infancy. I can say as a state official, that communicating transparent information to parents [is something] we don’t like to do.

That has to change.

We’re still going to have school districts. [They will have] much more focus on who the leadership is, who the front-line managers are. You think about how we do leadership in education, compared to how we do it in other sectors, it’s embarrassing.

Then you look at what the most successful leadership initiatives in education do: high investment, high challenge, high intensity. Districts are going to have to start taking ownership for that and providing services to these schools.

Teachers unions: You were probably wondering when I was going to mention that. They have a statutory and a very important role to protect teachers from egregious practices. And anyone who’s spent any time in schools knows that that happens. But they’re going to have to evolve into a service provider. Ultimately, the most successful ones will take ownership of teacher quality by providing professional development, by functioning as a job bank and, ideally, by doing a lot of the human relations functions that are done right now—very poorly—by urban school districts.

There are also things like what Randi Weingarten [head of the teachers union in New York City] has done. She’s opened up two charter schools. I can’t think of anything that’s better for the union brand than having a bunch of parents who want to go to a union-run school.

There’s one other player: social entrepreneurs. Teachscape, High Tech High, Aspire Public Schools, KIPP, Teach for America, New Leaders for New Schools. These are intermediate support organizations that we’re wrapping around autonomous schools so they are not out there alone.

Joseph Palumbo is a senior executive with Focus on Results, a consulting firm that works with school districts to raise student achievement. Clients include Edmonton, Alberta, Canada, a leader in school autonomy, and Springfield, Ill., where this year for the first time, all elementary schools met No Child Left Behind achievement targets.

The concept of autonomy in the successful school districts that I’ve seen is bounded autonomy. Schools, principals and leadership teams of teachers, make decisions about what should happen at the school within a framework.

In other words, districts help the schools stay focused on the issues of teaching and learning. They help schools say, this is what we think in our city, how good schools will look. These are the characteristics we want.

Now how you go about doing that, the decisions you make with your families and teachers, that is going to be something you have control over.

It’s not a free for all.

[Good] school districts make the data so urgent and apparent that people start to say, “Oh my god, you’re kidding me. Only 8 percent of our kids are leaving our system with the ability to get a job?” Everyone admits to their stuff. They put it out on the table, and they tell folks, “Hey this is the way it is and we’re doing something about it.” Whether it’s Springfield or Edmonton or Chula Vista, someone has the hard conversation in a wide variety of settings.

ON KEEPING THE FOCUS

Once they have that focus, there’s a lot of leadership—from teacher leaders, from the superintendent, from principals, from union reps—around creating a system of pressure and support to help get this done.

There has to be a lot of professional development, standing next to people, standing besides people, doing whatever you need to do to help them learn the skills they need.

And [schools] are willing to tackle the roadblocks when they come up, figure out who are the obstacles, who are the “corporate saboteurs”—because in every organization there are corporate saboteurs. They identify those people. They try to work with them at first, and when that doesn’t work, they work to get rid of them.

Then finally, they talk about student learning results on a regular basis. How many of our kids are reading at grade three? What percentage of kids are completing algebra successfully by grade eight? How many kids are we getting to graduate high school with the ability to go to school beyond high school? In Illinois, when students take the Work Keys test, we look at how many kids are at level five, because we know level five is what you need to get a job that’s going to make a life for yourself. And schools teach parents about those numbers. They teach teachers about the numbers, and they use them relentlessly.

So these are some of the themes I think we see in these schools and districts. Courage creates some urgency. They focus on teaching and learning. They provide leadership. And they make results a part of the language.

For more information about the Chicago School Policy Luncheon Series and the remaining luncheons in the 2007 series, click here. 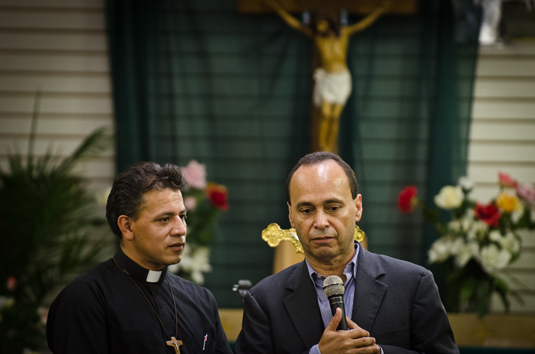