Coming into Coles Elementary in South Chicago, Principal Jeffrey Dase knew he needed a game-changer. Once an overcrowded school that needed mobile classrooms, Coles had lost about 40 percent of its students since 2000 and was struggling to raise its academic performance.
Other forces were adding pressure. With new charters and magnets opening up yearly, all offering at least a promise of something better, the school faced stiff competition.

This year, Dase is trying to keep the school viable by latching onto and stepping up its involvement in the magnet cluster program. The initiative, essentially a shadow of the district’s full-fledged magnet program, aims to give students high-quality neighborhood options by providing extra resources and giving schools a specialty that might draw folks in, says Abigayil Joseph, the head of CPS’ Office of Academic Enhancement.
“We want to model what makes magnet schools so successful,” she says.

With the district aiming to get out of its federal desegregation consent decree, the future of magnet schools, as well as the cluster program, is hazy. Even so, the district is pushing cluster schools to do more to distinguish themselves and promote their programs to parents as good choices.

But critics say the cluster program is all over the place, with uneven quality and academic performance, meager resources—only one extra staff member and a small grant—and little success drawing in families. Just 14 percent of students at cluster schools live more than one and a half miles away, similar to the figure at neighborhood schools. Elementary cluster schools and neighborhood schools both lose about a third of students, who opt to attend schools elsewhere, according to data from CPS.

Meanwhile, there is little oversight from the district or continuity in offerings among schools. For example, one math and science magnet cluster school offers a double period of hands-on science; another one doesn’t even have a lab.

Given that the district does not provide busing, most principals say it is nearly impossible to convince parents outside of the attendance area to choose their schools. Another factor that plays into the decision is quality: There’s no connection between having a magnet cluster program and high academic performance. In fact, two-thirds of the 229 schools with cluster programs score below the district average in reading, according to 2007 data.

“They are a joke,” says Wanda Hopkins, assistant director of Parents United for Responsible Education.

Dase says before he was hired at Coles, most parents had no idea that his school was part of the magnet cluster program. His predecessor used an extra teacher to help lower class sizes. Kindergarten through 6th-graders took Spanish just once a week.

Last year, Dase decided to embrace the cluster program and added his own discretionary funds to hire three enthusiastic young Spanish teachers. Starting in kindergarten, all Coles students will have Spanish four times a week.

Most principals agree that having a magnet cluster program is not enough to keep families in the fold if the school is failing otherwise. Improving overall learning is their top priority.

West Town is an example. Antuanette Mester, principal of Chopin School, says the demographic changes brought by gentrification dramatically affected her school, driving down enrollment by 55 percent since 2000 and leaving her entire 3rd floor empty. The school’s cluster specialty is math and science.

“The new people don’t have children, they have pets,” Mester says. “I have to tell them not to have them poop in our garden.”

But the community is also ripe with other options, so Chopin must fight to draw in families and keep students. Indeed, 64 percent of children living in the attendance area don’t attend Chopin—one of the highest percentages in the city.  The neighborhood’s other school options include two charters and a brand-new “franchise” magnet school, LaSalle II. Other neighborhood schools are high-performers.

One weekend, Mester attended services held by a Polish church in the auditorium to pass out flyers about the school. Many families were receptive. But without busing, she says, they wouldn’t move their children.

Indeed, Mester says she receives about 100 applications each year and accepts all the children. But only two or three of them usually show up, once their parents realize that no transportation is provided.

Having a cluster specialty “is just not enough to make people want to drive their children every day,” Mester says.

Principal Deborah Heath of Fernwood Elementary in Washington Heights agrees that quality academics, rather than the school’s writing and literature specialty, has kept her enrollment stable. In fact, she’s not even sure parents realize that the school has a specialty and plans to buy a banner announcing it for the front foyer.

At Fernwood, the percentage of students meeting or exceeding standards in reading has doubled since 2000 to nearly 64 percent. “Once we get you, you will be happy with the quality of the environment,” she says.

Sandra Lewis, principal of Harold Washington in Burnside, has to write grants and stretch her own discretionary budget to make sure that teachers have what they need, from colored pencils to violins, for the school’s fine arts specialty. Inside, there’s an entire museum devoted to the school’s namesake, the late Mayor Harold Washington—including his old Cadillac. Every wall has pictures, every stairwell a mural and every floor a theme. The second floor is devoted to Chicago high schools named after famous African Americans.

Dean Thornton, a soft-spoken man who is the school’s choir teacher, gets excited as he talks about participating in citywide music and choir competitions. But schools shouldn’t have to have a specialty to get well-rounded programs.

“Top suburban schools have it all—language, music, band, drama, the core subjects,” Thornton says. “In CPS, we see it as special.” 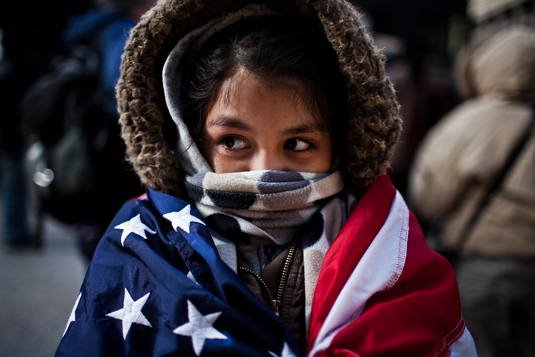 Izaithell Aguirre, 11, wraps herself in an American flag during a demonstration for a moratorium on deportations in Chicago. Organizers decided to have the protest on Jan. 21 to coincide with President Barack Obama's inauguration. Photo by Jonathan Gibby. 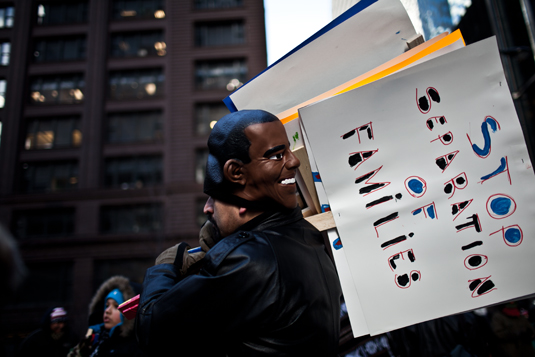 A protester sporting a mask meant to resemble President Barack Obama carries signs during a Jan. 21 demonstration for a moratorium on deportations in Chicago. Photo by Jonathan Gibby.