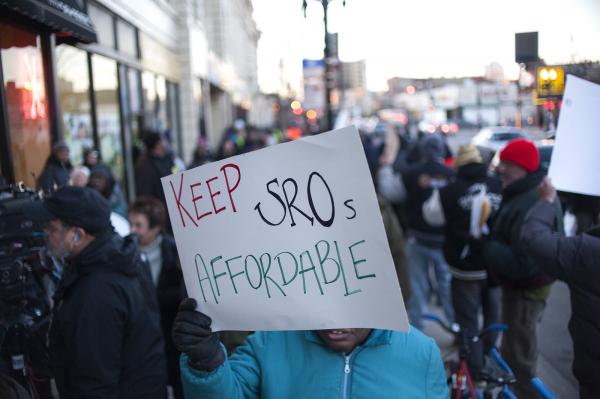 A woman holds a sign during a rally outside 46th Ward Alderman Cappleman's Uptown office in March 2013. [File photo by Lucio Villa]

A city ordinance designed to stem the depletion of affordable housing in Chicago that was to be introduced Wednesday has been pushed back until June – and activists, who have been lobbying City Hall on the issue for years, are pleased.

The Chicago for All Ordinance mitigates the conversion of single-room occupancy buildings into high-end apartments and curbs the methods owners use to evict tenants. Aldermen who are supportive of the measure are concerned about a clause that limits rent increases on daily or weekly renters, saying it may infringe on private ownership rights. Once addressed, Alderman Walter Burnett Jr. (27th Ward), one of the sponsors, said he expects the measure to pass.

Activists are encouraged by the move.

“We want a winnable ordinance written up to ensure its swift passage into law,” said Mary Tarullo, a housing organizer for ONE Northside. “We previously had not been collaborating with [the city council] on this issue, but now they are stepping up in a way they haven’t before, which in the long term is a win for us.”

SRO units are typically one bedroom with a shared bathroom and kitchen, and are widely considered “last resort” housing for extremely low-income residents.

The main part of the ordinance requires SRO building owners to apply for permission prior to large-scale rehabilitation. The owner must either retain the affordable housing units or pay a fee that would go toward maintaining or upgrading the city’s existing stock.

Aldermen and advocates gathered at City Hall Wednesday morning to explain the delay.

Vivien Tsou of LIFT, a community organization in Uptown, said similar measures have been successful in other major cities.

“This is not a new idea; many other cities have policies in place that maintain affordable housing,” she said.

In 2011, Los Angeles passed an ordinance requiring developers to either replace the SRO units they want to demolish or pay the city to do it. That same year, New York City banned SRO owners from renting to tourists at premium rates.

Affordable housing advocates have long been concerned about the depletion of SROs. In the last two years, Chicago’s North side has lost over 2,200 units of affordable and subsidized housing, according to Norman Kaeseberg, an organizer at ONE Northside and previous resident of the Chateau Hotel. The Chateau was sold last year to a private developer who evicted residents in order to build luxury apartments.

This month saw the closing of Logan Square’s Milshire Hotel, which had housed low-income residents with mental illness and substance-abuse issues.

“It’s a story we have heard again and again for the past 20 years; developers buying up the old hotels, getting rid of the low-income tenants, and flipping the properties for the market rate,” Kaeseberg said. “There are only about 6,000 SRO’s left in the entire city.”