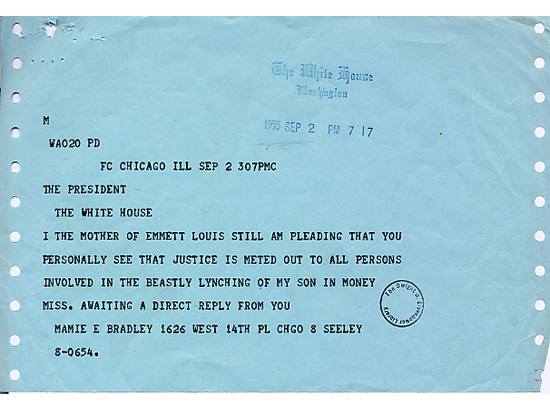 For Christopher, who also makes gentle the life of the world. With thanks. — Ethel

It was a call I almost didn’t answer 10 years ago. Northern Virginia area code. Puzzled over that a bit. And the name. Blink. Was I expecting a call from a Kennedy … Robert? Seriously?

A heartbeat-of-a-moment before I heard the voice on the other end. “Christopher. This is Ethel Kennedy. I’ve been looking for you for three weeks!”

She had been looking for me because she wanted to tell me — personally — that I was being honored with a Robert F. Kennedy Book Award for my work on the story of Emmett Till’s mother, Mamie Till-Mobley, who sadly had died before the book was completed. Ethel Kennedy wanted to tell me that, and how much the story of Emmett Till had meant to her. To her family. We talked about that for much longer than I would have expected. Almost as telling as the fact that “Robert Kennedy” was still on the caller ID. It spoke to her commitment to honoring and preserving the stories that teach us about justice and reconciliation.

This past Mother’s Day weekend, I thought about that conversation. About Emmett and his mother. About the lessons mothers like Mamie Till-Mobley and Ethel Kennedy want their children to learn. About a brutal lynching of a 14-year-old boy and what that tragic event can teach us nearly 60 years later. It’s important to consider, for, as much as the facts of this case have been dissected over the years, it seems we still understand so little about its true meaning. We need to understand that deeper meaning if we ever are going to make progress toward reaching a truly just society.

I thought about all of this over the past few days partly because, well, it was Mother’s Day and Mother Mobley certainly would have wanted to be remembered. To be remembered along with other mothers — like Ethel Kennedy — who dedicated their lives to social and legal justice, as she had done. But I thought about it mostly because the weekend coincided with the 10th anniversary of the May 10, 2004 announcement by the U.S. Department of Justice that it was launching an investigation into Emmett’s death. A headline-grabbing announcement just before I would travel to Washington, D.C. — at Ethel Kennedy’s insistence — to receive the special recognition. Nearly 50 years after the grisly crime, there finally would be a federal probe to determine whether charges could be brought against anyone who had taken part in it. People had been moved by the story of the young Chicagoan who had been lynched in the Mississippi Delta in August 1955 for crossing the line — flirting with a white woman as part of a childish prank. For that capital offense during the period of American Apartheid, Emmett was kidnapped, tortured, then finally — several hours later — shot and dumped in the Tallahatchie River with a 75-pound cotton gin fan tied to his neck with barbed wire.

Two half brothers, Roy Bryant and J.W. Milam, were arrested, tried and acquitted. There had been no investigation. No autopsy. The all-white jury casually sipped Cokes to drag out the deliberation to a little more than an hour. To make it “look good.” The two killers — protected against double jeopardy — boasted about the lynching in a Look magazine interview published in February 1956. They reportedly were paid $4,000 for the exclusive — more than $35,000 in today’s money.

How could people not be moved by that story? No one had been made to pay for Emmett’s death, even while his confessed killers were paid to talk about it. That revelation was like fingernails across a chalkboard of our consciousness.

That consciousness had been raised during the year and-a-half before the Justice Department decision. There had been wide national publicity surrounding the case in January 2003 with reports of Mother Mobley’s death at 81 of a heart attack. There was her pre-recorded testimony in Stanley Nelson’s award-winning “American Experience” documentary, “The Murder of Emmett Till,” that aired in February 2003. And there was the book, “Death of Innocence: The Story of the Hate Crime That Changed America,” documenting Mother Mobley’s story published later that year.

People were awakened to the pieces that had been missing for years. There had been others in addition to Bryant and Milam who participated in Emmett’s kidnapping, brutal death and cover-up. Kansas City activist Alvin Sykes pushed that issue with the Justice Department, and later told me he had shared with officials the Stanley Nelson documentary early in 2003. Chicago Congressman Bobby Rush called for a federal investigation in early 2004.

Nearly three years after the beginning of the FBI investigation, this chapter of the Emmett Till story ended. Some questions were answered. Emmett’s remains were exhumed. An autopsy was performed. He was positively identified. No indictments were handed down. Other questions — like what it all means — remain unanswered.

That is why finding and convicting fugitives would not close this matter.

The story of Emmett Till is not the story of bad individuals who committed a horrible crime. It is the story of an entire system that made it possible for people to believe they could get away with murdering African Americans. It is a story that shows how black life is devalued and sorted in a social structure that allocates rank, privilege and power according to how you are identified. How you are placed in the social order. Emmett Till crossed a line. His murder was not just about him, but also about every other black kid like him who might have thought he, too, had no boundaries. In the expansive Mississippi Delta. Even in a gated community in Florida.

The period surrounding Emmett’s death was filled with tension following the second of two historic decisions by the Supreme Court in Brown v. Board of Education. To say the least, there was pushback. Whites in the South called it “massive resistance.” For them, a way of life was threatened. Black people in the South called it a “reign of terror.” For them, life itself was threatened.

That is what Emmett Till walked into. That’s what his story is all about. That is what a lynching is all about. Terror. Sending a message. It is a process that still is operative. In so many subtle and not-so-subtle ways. In the coded language of the micro aggression. (“You speak so well.”) In the symbolism of stereotypes. (“Gangsta” theme parties on college campuses.) In the violence of hate crime. (Emmett Till, Michael Donald, Raynard Johnson, James Byrd, Johnny Lee Butts …).

That is why it is important to recognize the true meaning of Emmett Till’s experience, as his mother would want us to learn. As Ethel Kennedy has wanted people to recognize. Until we see the larger context of this politics of place — from demeaning expression to violent physical enforcement — we will not be able to appreciate how damaging these occurrences can be, and how complicit we all are, if only because we have done nothing to make a positive difference. In the last six months of her life, as we worked together to preserve her story, Mother Mobley gave me the gift of context, of meaning, of purpose. That’s what mothers do. They try to teach us those things we need to know. They are moved to do this so that we can enjoy better lives. From my perspective, Mamie Till-Mobley and Ethel Kennedy have done it so that we might enjoy a more just society. A better world. A world in which we recognize that the angry rhetoric of political expedience has no place in enlightened progressive discourse. A world built on words that inform, not inflame. On words that inspire, not incite.

Ethel Kennedy punctuated that message for me when she signed my copy of “Death of Innocence.” Beneath a photo of the 1989 dedication of the Civil Rights Memorial at the Southern Poverty Law Center in Montgomery. She sits on the stage in that photo, while Mother Mobley speaks at the podium.

In her inscription, she paraphrased Bobby Kennedy’s words from one of his most impacting speeches. The one he delivered in Indianapolis on the night of the assassination of Dr. Martin Luther King, Jr. Just two months before his own violent death. As words calmed that city on that night, so too, they still might frame our conversation in moving forward now.

“Let us dedicate ourselves to what the Greeks wrote so many years ago: to tame the savageness of man and make gentle the life of the world.”