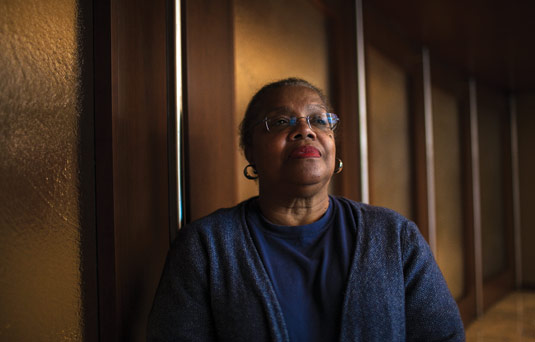 Rita Fry joined the Law Office of the Cook County Public Defender in 1980 and worked her way up to oversee the office as the chief public defender. She held the job from 1980 through 2003. Photo by Jonathan Gibby.

Editor’s note: To celebrate four decades of muckraking on issues of race and poverty, we kick off this 40th anniversary edition with a focus on four of The Chicago Reporter’s key beats–criminal justice, immigration, labor and housing.

The history behind each issue has had its own trajectory since the Reporter’s founding in 1972. To illustrate that, we sat down with prominent figures whose activism has made its mark in their respective fields and asked them to reflect on their experiences.

We are confident these retrospective articles provide a unique insight into what it’s been like to work “in the trenches” of the nation’s toughest social justice issues.

Rita Fry stumbled into Cook County’s criminal court the same way many young public defenders have during the past half-century.

On her first day in court, she was handed a legal pad, a copy of the criminal code and given a nudge from a judge. He said, “Come on counsel. Get on with it,” Fry recalled.

It was 1980, and the Cook County criminal court was quickly becoming the busiest in the nation. Fry was too busy learning the ropes at women’s court at 11th and State streets to be counting caseloads or plotting out trends.

All she knew was that the procession of cases thrown her way seemed unending, and that her job boiled down to two things: getting the best deal for her clients and keeping the courts moving–often in equal parts. “It’s like you’re not even thinking about it,” said Fry, who handled scores of cases every year for a dozen years before she was promoted to Cook County’s chief public defender. “You’re busy doing one case at a time, five cases at a time.”

During those years, growth in Cook County’s criminal justice system accelerated at a pace no one was prepared for. Expenditures for judicial, law enforcement and correctional activities grew by more than 60 percent from 1969 to 1981, according to a Chicago Reporter analysis of U.S. Department of Justice data. And during the 40 years since the Reporter launched, per-capita spending on the criminal justice system in Cook County rose from $45 to $222 in today’s dollars, the analysis shows.

From day one, it was a challenge to give her clients the level of legal counsel she’d imagined providing back as a law student at Northwestern University, Fry recalled. She figured that out the moment a judge summoned Fry and her first client to his bench. “I said, ‘Judge, I haven’t had an opportunity to meet with my clients or anything.’ He said, ëThat’s OK because they’re right behind you.’”

When Fry turned around, she saw 40 women sitting on benches waiting for her. Most were there on prostitution charges. Her partner in the courtroom had called in sick that day, so she had to represent each of the women, some of whom went by aliases like “Betty Davis” and “Jackie Kennedy.”

Fry’s first client knew the system better than she did. When she told the woman that she’d meet with her in a back room to interview her about the charges, “She looked at me like, ëWhat are you talking about? I’m pleading. I’ve got to go home. I’m tired,’” Fry recalled.

The courthouse was quickly filling up with low-income people, Fry observed, as she moved on from the women’s court to felony trial assignment, then to the murder task force. As the 1980s and 1990s dragged on, a growing number of people were charged with drug-related crimes.

Lawmakers reacted to the trend by adopting new laws with harsher punishments. The war on drugs touched off a ripple effect throughout the criminal justice system. Arrests grew, and an unprecedented number of people–including juveniles–were sent to adult courts. Jail and prison populations swelled.

African Americans bore the brunt of stiffer sentencing laws throughout the 1990s. In 2002, the Reporter revealed that black defendants were twice as likely to do jail time for drug crimes as their white counterparts. Accountability laws also widened the net and snared defendants in long prison sentences for acting as accomplices to carjackings, gun crimes and homicides.

And Reporter investigations revealed that thousands of minors have become felons during the past two decades.

In the ‘80s and ‘90s, money for investigators, expert witnesses and forensic work was always tight around the public defender’s office. The reality: Caseloads grew at a faster clip than the budget.

When the use of DNA evidence emerged, Fry began requesting tests in some cases. In the 1980s, DNA lab work cost about $5,000 for each case. The public defender’s office paid but made it clear that further use of DNA testing was “not in the budget,” she said.

In 1998, four years before Fry was sworn in as the chief public defender, a pattern of police torture, false confessions and wrongful convictions began to unfold in the federal courts. There was “a buzz” that defendants were being coerced into false confessions, Fry said. “You know things aren’t right,” she said, “But is there proof? That was the problem.”

Fry was on duty May 2, 1986, when Aaron Patterson showed up in bond court and testified that he’d been tortured into confessing to murder. Years later, former Chicago Police Cmdr. Jon Burge was alleged to be among several police officers who tortured Patterson by putting a typewriter bag over his head and beating him.

Patterson was dubbed one of the “Death Row 10,” a group of men who claimed they falsely confessed under police torture. In 2000, Fry, along with a handful of other criminal justice experts, were appointed by Gov. George Ryan to the Illinois Commission on Capital Punishment to review the allegations. In 2003, Ryan commuted the death sentences of 167, mostly African-American men, including Patterson, who was pardoned the same year.

The most recent wrongful conviction case was settled in 2012. In Cook County, more people have been exonerated–83 since 1989–than any other jurisdiction in the country, according to the National Registry of Exonerations, which is maintained by Northwestern University’s Center on Wrongful Convictions and the University of Michigan Law School.

Fry retired in 2003 but jumped back into the fray in 2009 when she was tapped to serve on the Chicago Police Board, a quasi-independent agency tasked with rooting out abusive officers that recommended the firing of Burge in 1993.

Since 2009, the City of Chicago has paid out more than $45 million to settle allegations of police beatings, shootings and false arrests, according to the Reporter’s 2012 story. Less than 1 percent of the city’s officers accounted for a quarter of those payouts, and only a handful of officers have been prosecuted in the criminal courts, the story found.

Meanwhile, the courts show no sign of slowing down. Thousands of new criminal cases are opened in the Cook County courts each month.

Few other jurisdictions have produced the number of felons that Cook County has during the past decade. Since 2000, 216,672 people have been convicted of a felony in the county, the Reporter analysis of court data shows. That’s enough people to fill the seats of Soldier Field more than three times over. Drug crimes and thefts topped the list of convictions.

Fry said the numbers should give people pause.

“It’s time for people to get informed,” she said, “and to know that we can’t put everyone in prison.”

is a staff reporter at The Chicago Reporter.