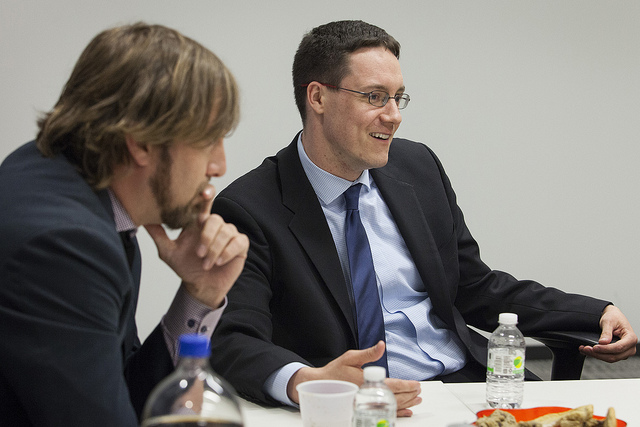 From left, principals Chad Adams of Sullivan High and Adam Parrott-Sheffer of Peterson Elementary at a June 5 roundtable discussion.

CPS officials seem to be forging ahead with the second year of a principal professional development contract with the SUPES Academy, despite lingering questions about the quality of the training  and the relationship between CEO Barbara Byrd-Bennett and the founders of the for-profit business, for whom she previously worked as a consultant.

The Inspector General’s investigation into the circumstances surrounding the award of the $20 million contract is ongoing. At last year’s June board meeting, members approved the no-bid contract, the largest such contract in at least three years. Some Board of Education members have said they want to review the three-year contract annually. Yet they don’t need to wait: According to the board report, they can terminate the contract anytime with 30 days written notice.

Responding to complaints by principals that the training has been too elementary for leaders of struggling urban schools, and that the Saturday sessions forced them to give up weekend time, principals have twice been given the chance to opt-out of the sessions (the most recent opt-out form was due June 9). Yet some principals say the form’s language is intimidating. It reads: “I understand … I will still be held accountable for the content of the sessions and will be expected to demonstrate professional growth in the same fashion as my colleagues who attend CELA.”

CPS spokeswoman Lauren Huffman says few principals have officially opted out and the district has no plans to redesign the program. On its website, SUPES highlights the academy, called CELA for Chicago Executive Leadership Academy, as one of its success stories. Principals, however, say they are showing their discontent by simply not attending.

One principal told Catalyst that at the last training in early May, 75 name-tags were made for principals. In the morning, 45 principals attended. By lunch, fewer than 35 principals remained.

Principals also say they were frustrated to learn that the state has not yet approved the training, which means they cannot receive credit with the Illinois Administrator Academy for attending. Principals must obtain at least one IAA credit per year to stay certified.

Meanwhile, as recently as November, Byrd-Bennett apparently participated in the 2014 National SUPES Academy. A Facebook picture from Nov. 16, 2013 has this caption: “Chicago Public Schools CEO – Dr. Barbara Byrd-Bennett fields questions from our 2013 Cohort about her tenure as superintendent in Chicago and former districts.” CPS spokesman Joel Hood says Byrd-Bennett “sometimes informally stops by SUPES Academy trainings for aspiring superintendents around the country and will talk to participants. She is not paid for these visits.”

A Catalyst investigation showed that several of the superintendents who were being paid to act as speakers and mentors for CELA ran school districts that also had contracts with SUPES. One of them S. Dallas Dance, the superintendent of Baltimore County Public Schools, was forced to give up the consulting gig after Catalyst revealed his participation. Dance failed to disclose the job to his school board.

During Catalyst’s recent principal roundtable, the subject of SUPES emerged as Deputy Editor Sarah Karp, Associate Editor Melissa Sanchez and the principals discussed why some school leaders speak out about policies they disapprove of and other principals stay silent. (Read Speaking out from the trenches, Part 1 of our series.)

The roundtable included Adam Parrott-Sheffer, principal of Peterson School (who is leaving CPS for the suburbs); Troy LaRaviere, principal of Blaine; Chad Adams, a new principal from Sullivan High; and Diedrus Brown, whose school, Gresham, has been slated for turnaround. Of the 10 SUPES sessions, Parrott-Sheffer did not attend any; LaRaviere and Brown each attended one; and Adams went to seven.

Catalyst:  How do you get principals who are maybe on probation, in a much more vulnerable position, to speak out?

Parrott-Sheffer: If you design the job in a certain way and create systems and culture around it, you end up starting to attract a certain type of person. So have we created a system where the type of people going through the eligibility process, who are being appointed to interim contracts–are they the type of people who are willing to stand up? I don’t have an answer to that. … When you talk about the people at SUPES [sessions] it’s people who are afraid of speaking up. We are talking about being able to say, “The professional development you’re providing is not very good. It’s on a Saturday for 10 hours, and that’s somewhat disrespectful because you did not ask or include me in the process.” You should feel comfortable saying that. We have people who are not even willing to bring it up and go under duress. I wonder can we change it unless we intentionally decide, who are the leaders we want in our schools, and how are we supporting local school councils or giving LSCs that power again to make those sorts of decisions?

Catalyst: How were the sessions?

LaRaviere: At the first one, I sat around for about an hour being encouraged to tell other people how great they were, and hearing them be encouraged to tell me how great I was. I left feeling like I wasted my time. It did not get any better as the weeks progressed. The second was about marketing your school. A very polished gentleman led the workshop – Dallas Dance from Baltimore. He made the statement that perception is reality. You have to alter people’s perception of your school. I told him and everyone gathered that I altered the perception of my school by doing what it takes to increase our student achievement. I told him it seems to me that CPS is more interested in changing people’s perception of CPS than with changing CPS itself. And the fact they paid you $20 million to come in and took money from my students and gave it to you to tell me how to market my school is evidence of that fact. That, I believed, was going to be my last training. [He was then switched to another cohort.] The new one was the best one I had been to. Principals were talking to each other, getting ideas from each other. I’ll never forget, at the end, the guy who ran it said “I know I went off script and let you guys talk.” I realized the reason it went so well was he decided to stop and not do the SUPES curriculum and actually just let us talk to each other. CPS didn’t have to pay SUPES $20 million to put principals in a room together and let us talk to each other.

Adams: That was the best part, being in the same room and talking to each other. .. I’m a New Leader [New Leaders is a principal training program in Chicago and 11 other cities and metro areas]. So I was able to retain my mentor. A lot of the curriculum was the stuff I’d learned through the leadership program. There might have been some misalignment.… The hardest part for me was I got my principal contract on June 30, and July 1 became a principal. Within the first or second day [I was told to be in SUPES]. I hadn’t even been in my building yet.

Parrott-Sheffer: The email was sent at 4:58 p.m. by [Chief of Talent Development] Alicia Winckler on the Thursday before the Fourth of July weekend. You were expected to be there at 7:30 a.m. the next Monday, which is why I never went.  I thought it was so disrespectful that two minutes before a long weekend, you expect me to be somewhere the following Monday. If you want to get on my summer calendar, you better start scheduling things in February. Because we are planning professional development with teachers, we are planning interviews if we have to do any hiring, and all these others sorts of things. To expect people to be able to clear everything is dismissive of the job and the role and the profession.

Catalyst: CPS told us just one person opted out.

LaRaviere: I don’t know if that one was me. I gave it to my clerk to email in.

Parrott-Sheffer: The language [on the opt-out form] was intimidating. Anyone who can read between the lines can see–if you don’t go and your school doesn’t perform as well as we expect, we are coming after you. ..  If you’re spending $20 million, we should have the best people here. We should have Grant Wiggins [a nationally-recognized assessment expert] here for a week teaching people how to do unit planning and lesson design. If you gave him a million dollars, I bet you could get him for half the year, and then some.

Adams: Customize it for principals.

Parrott-Sheffer: Do it from the best, not some wackadoo person you found in Wisconsin. I mean, come on. CPS doesn’t do anything based on who is the best person doing the work.