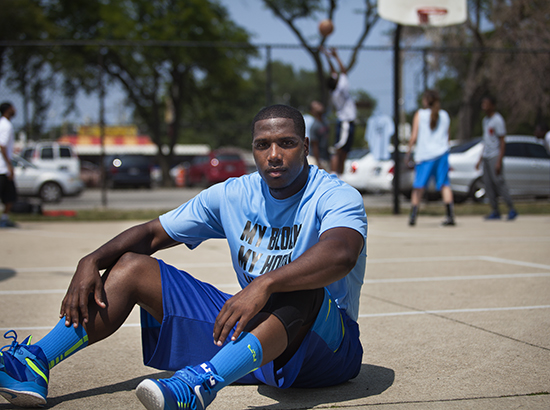 Jahmal Cole blogs about Chicago neighborhoods at "My Block, My Hood, My City." [Photo by Michelle Kanaar]

As a child, Jahmal Cole used to dream he was playing in the NBA as he shot hoops at the park.  He’s not an NBA player, but he still plays basketball. Today, Cole, a community activist, uses the game as a vehicle to address Chicago’s longstanding segregation. He is traveling to 12 parks in 12 weeks, playing basketball and other sports with people he meets to try to overcome racial barriers.

“When you’re playing basketball, people are more willing to break down segregation,” he said.

Cole, 30, is writing about his tour of city parks on his blog, “My Block, My Hood, My City,” as well as his travels to each of Chicago’s 77 neighborhoods. Cole also plans to write a book.

The Chicago Reporter  talked with Cole about inequality at city parks, the topic of a new investigation by the Reporter, which includes a map of park district spending by neighborhood.

What have been some highlights of this project?

When I saw gentrification.  At Seward Park, there was one white girl tanning outside.  Ten years ago, this park was the most notorious in the city.  Also, I’ve met so many entrepreneurs on the basketball court.  Another shocking thing was at [Cole Park] in Chatham, we were kicked out of the park.  The park had 30 people playing basketball, and they wanted to put locks on rims.

Some parts in Chicago, you can bask in safeness.  You don’t realize that five minutes down the road, there can be a ghetto.  We need to start seeing ourselves as one Chicago instead of 77 cities.  We need to see ourselves as a greater whole and expose ourselves to different perspectives.

I’ve seen that in these poorer communities, usually celebrities come and redo them so they have nicer parks.  In richer communities, they don’t use the park because there are so many other options.  In some of these places, parks are the only option.

Seward Park had the best resources.  It’s sponsored by Nike. Jackson Park was baller.  It had really good competition.  Cole Park in Chatham had the most city pride.  People were yelling, “This is Cole Park!”  They had a rich culture.  The best young talent was in Lindblom Park in Englewood.  They had the best basketball players.  A park on the West Side, Douglas Park, the kids let me play soccer with them.  The lawn is unbelievable.  The Chicago Park District is doing a great job there.  My favorite Park so far was Wrightwood Park. The people were very diverse and competitive.

Why are parks important in Chicago, and how do you think they can be improved?

They’re our community centers.  It’s a place for people to gather, for groups to lead.  The Chicago Park District is doing a great job.  We need to make sure people keep them up, and make sure they’re not kicking people out after dark.  Make sure there are lights and a three-point line.  Make the kids feel special when they step on the courts.

People use parks, but some people are scared to go to parks.  If there is a drive-by shooting, what happens to them?  I rarely see park attendants.  Just make the park safe.  In college communities you can push a button and get help.  If parks are going to be community centers, they need to do a better job to make them safe.

What issues do these neighborhoods face?  What examples have you seen of this?

The marginalization of Wrightwood Park.  Puerto Ricans come back there.  They used to live in the Fullerton and Ashland apartments, Section 8 homes, but they can’t afford to live there anymore.  They were marginalized and moved out.  Also, the drug issues in Columbus Park.  A lot of the drug dealers play basketball.

I think there’s an inadequacy of compassion among people.  Some people have the illusion of security in Chicago.  Chicago is only as strong as its most underserved community. … I hope that me taking the chance to go to all these other places inspires people to do the same.

After seeing these different neighborhoods, what is your perspective on equality in Chicago?

What’s been surprising is the magnitude of disparity between communities.  I think the social capital that’s built up in the poorest communities is also surprising.  Neighbors still gather together to solve issues and talk about issues.  People have showed love.  It’s not about crime at all.  It’s about spreading positivity.