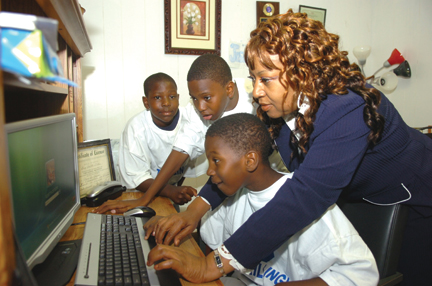 “Yeah, yeah, I am a Four, I’m a Mafia.” When Edward Ferguson, an 8th-grader at Ella Flagg Young Elementary in Austin, hears talk like this, he knows what to expect next. Kids are “representing” their gangs as they pass in the hallways, and the back-and-forth is often the prelude to a fight, either in the hall or outside after school.

“It scares me,” says Ferguson, who admits that he has felt pressured to join a gang. “People have gotten beat and seriously hurt.”

Ferguson says he has found a way to cope by joining a church-based group called Walk By Faith Mission, where the pastor fortifies him with the inner strength to try to be different. But his story illustrates how problems with serious fights and gang activity inside schools disrupt education for elementary students, as well as their older counterparts in high schools.

Principals of elementary schools with high rates of violence say that helping young children learn to resolve conflict without fighting is key to curbing the problem.

But at 62 elementary schools—or about 15 percent—the incidence of violence was more than six for every 100 students last year, higher than the district’s average. At 25 elementary schools, the rate was in the double-digits.

One such school is Penn in North Lawndale, where the rate was 13 violent incidents per 100 students. Sherryl Moore-Ollie, the school’s new principal, says that it’s important to know the background of the children to understand why fights and other incidents occur. Many of Penn’s students are in foster care or living with relatives because their parents are on drugs or in prison. Almost all the students are poor.

“These kids bring a lot of baggage with them,” Moore-Ollie says.

Dorothy Susan Naughton, the principal at Holmes in Englewood, observes that many children “don’t get attention at home and they come to school and act out.”

Yet neither principal believes the situation is hopeless. Moore-Ollie points out—and the data back her up—that the climate at Penn has improved. Five years ago, the school posted 20 incidents per 100 students.

Moore-Ollie, who was assistant principal before assuming the principalship, says that administrators turned the school’s situation around by pushing teachers to deal with minor issues in the classroom and send only those students with more extreme behavior problems to the office.

Once in the office, she and other administrators don’t hesitate to call the police if they feel such a call is warranted. “This sends a message to other students—that violence will not be tolerated,” Moore-Ollie says.

Gwen Walters, assistant principal at Wentworth in Englewood, says that her staff is trying to stem violence with a system of incentives called Positive Behavior Support.

Students are rewarded for good behavior, rather than punished for negative behavior. The state supports the program by providing schools with a network of coaches and information about best practices.

Moore-Ollie and other principals say they work to make their elementary school a home-like environment where students can trust teachers.

Naughton, who has been principal at Holmes for three years, says she hired a dean of students who has focused on developing more extracurricular activities, such as junior ROTC and ballroom dancing. Last year, the staff took students on a trip to a nature preserve in the south suburbs to bond with each other and with teachers. Naughton also spearheaded an effort to have students trained as peer mediators to deal with conflicts.

“We want kids to learn how to talk to each other instead of using their fists,” Naughton says.

Kimberley Driscoll contributed to this report.