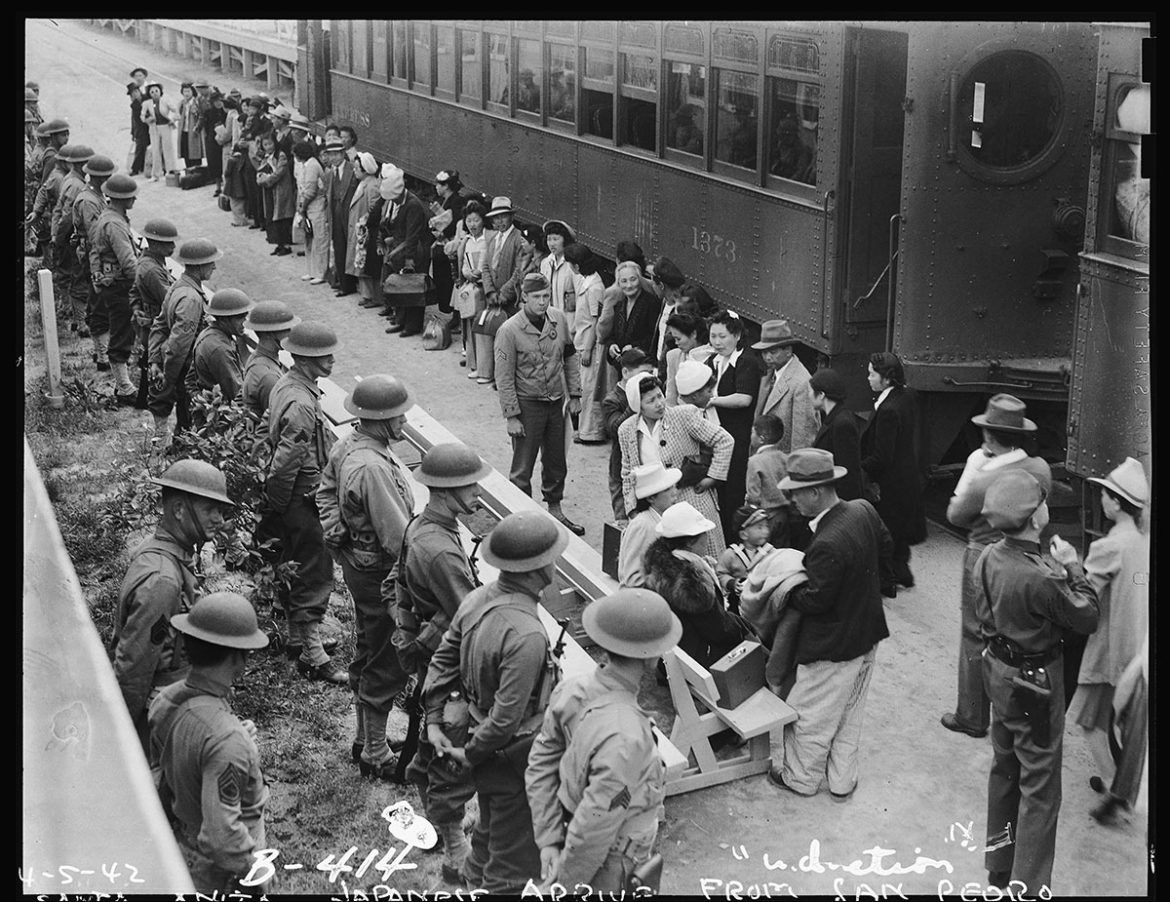 From the launch of his presidential campaign, Donald Trump has explicitly drawn on the history of Japanese-American mass incarceration, widely known under the misnomer “internment,” to justify the targeting of Muslim people—from registries, to bans, to detentions, to expulsions.

Shortly after Trump was elected, Carl Higbie, former spokesman for Trump’s Great America PAC, noted during an interview with Fox News that “there is precedent” in Japanese internment for the president’s proposed registry of migrants from Muslim-majority countries. Even Megyn Kelly incredulously retorted, “You can’t be citing Japanese internment as a precedent for anything that the president-elect is going to do.”

Many of us may find ourselves dissonantly agreeing with Kelly’s rebuke to suggestions that we revive internment. Indeed, with the passage of the 1988 Civil Liberties Act, the U.S. formally acknowledged the “fundamental injustice” and “racial prejudice” of internment, apologized and provided reparations to internees, and established an educational fund to teach the public about this “historic mistake.” Since this landmark legislation, we have ostensibly come to understand Japanese-American imprisonment as a shameful part of our history, a practice that we should never allow to occur again.

But the outrage against proposals to renew internment has largely missed a crucial point: As a matter of law, internment is constitutional.

In Korematsu v. United States (1944), the Supreme Court decided that the government order to exclude all Japanese persons from the West Coast aligned with our Constitution, even as it noted that any racial restriction of rights is always “suspect.” This case still holds as binding legal precedent today, with dangerous implications for our present and future—particularly as it becomes increasingly cited as a model for policy rather than a disgraceful relic of the past.

As Justice Robert H. Jackson noted in his dissent: “[T]he Court for all time has validated the principle of racial discrimination in criminal procedure and of transplanting American citizens. The principle then lies about like a loaded weapon ready for the hand of any authority that can bring forward a plausible claim of an urgent need.”

Claims of “an urgent need” have repeatedly emerged ever since the Supreme Court affirmed internment’s constitutionality—from the House Un-American Activities Committee’s effort to detain radical black activists in the 1960s, to the mass Guantánamo Guantánamo imprisonment of Haitian refugees at Guantánamo (just three years after we apologized for internment), to the indefinite detention of so-called “enemy combatants” of the war on terror.

Indeed, the war on terror has provided a deep well of “urgent need,” inspiring pundits and politicians to justify racial profiling and mass imprisonment. “We should have been profiling on September 12, 2001,” Fox News commentator Jonathan Hoenig asserted in 2014. “The last war this country won, we put Japanese-Americans in internment camps, we dropped nuclear bombs on residential city centers,” he stated, suggesting that race-based imprisonment and weapons of mass destruction unleashed on civilians are the way to make America a winning nation again.

And while Hoenig declared “the enemy is … Islamic,” in the eyes of those who want to make America great again, the enemy is actually much more diverse and widespread. In answering his own question, “Why don’t you intern all of them?” Michael Savage, a radio host with close ties to the president, responded, “Because America is a weak nation, it has been poisoned by many, many different sources.”

The specter of mass detention looms as the antidote that could wipe out the poison the rest of us have introduced to the U.S., through our religious, racial, and cultural backgrounds, through our convictions of building a just society. This is what Trump’s policies—the Muslim ban, suspension of refugee support, attacks on immigrants, increased criminalization of black and brown communities, evisceration of support for public health (especially reproductive health)—tell us.

Trump and others’ references to internment threaten to normalize the idea that targeted mass imprisonment is legitimate policy, and their rhetoric paves the way for the federal courts to act on a dangerous legal precedent. The only thing that has stopped the courts from actually citing internment in their legal decisions is its lack of legitimacy historically, politically, and socially. The law doesn’t exist in a vacuum but in a context of legal interpretation shaped by all of us. The massive airport protests, for example, have worked alongside the lawsuits filed by the ACLU and other organizations to create a context in which the Muslim ban becomes totally unacceptable in the courts and in our overarching political culture.

So, while White House Chief of Staff Reince Priebus asserted that “99 percent” of Americans support a Muslim registry, the mobilizations of many of the 99 percent speak otherwise, as we rail against the orchestrated chaos and state-sanctioned violence against our neighbors. From the airport protests, to the Movement for Black Lives, to the resurgent sanctuary movement that calls for community defense for undocumented immigrants and all people targeted by state and extra-state violence, many of us recognize the connections that bind our fates together.

As we move forward, we can look to the history of Japanese-American incarceration as a warning that informs our struggles. The resistance of those who stood up against internment— within and beyond the camps—provides a beacon of what we must do to defend each other. At stake is not only the protection of our neighbors under attack, but the very grounds of our democracy.

Editor’s Note: A. Naomi Paik will lead a panel entitled “Rightlessness: From Japanese Incarceration to the Muslim Ban” at 11:30 a.m. on July 8, 2017, at Alphawood Gallery in Chicago. The panel is part of their new exhibition, Then They Came For Me: Incarceration of Japanese Americans during WWII and the Demise of Civil Liberties, which debuts June 29, 2017.

About A. Naomi Paik

A. Naomi Paik is an assistant professor of Asian American Studies at the University of Illinois, Urbana-Champaign and author of Rightlessness: Testimony and Redress in U.S. Prison Camps Since World War II (UNC Press, 2016).