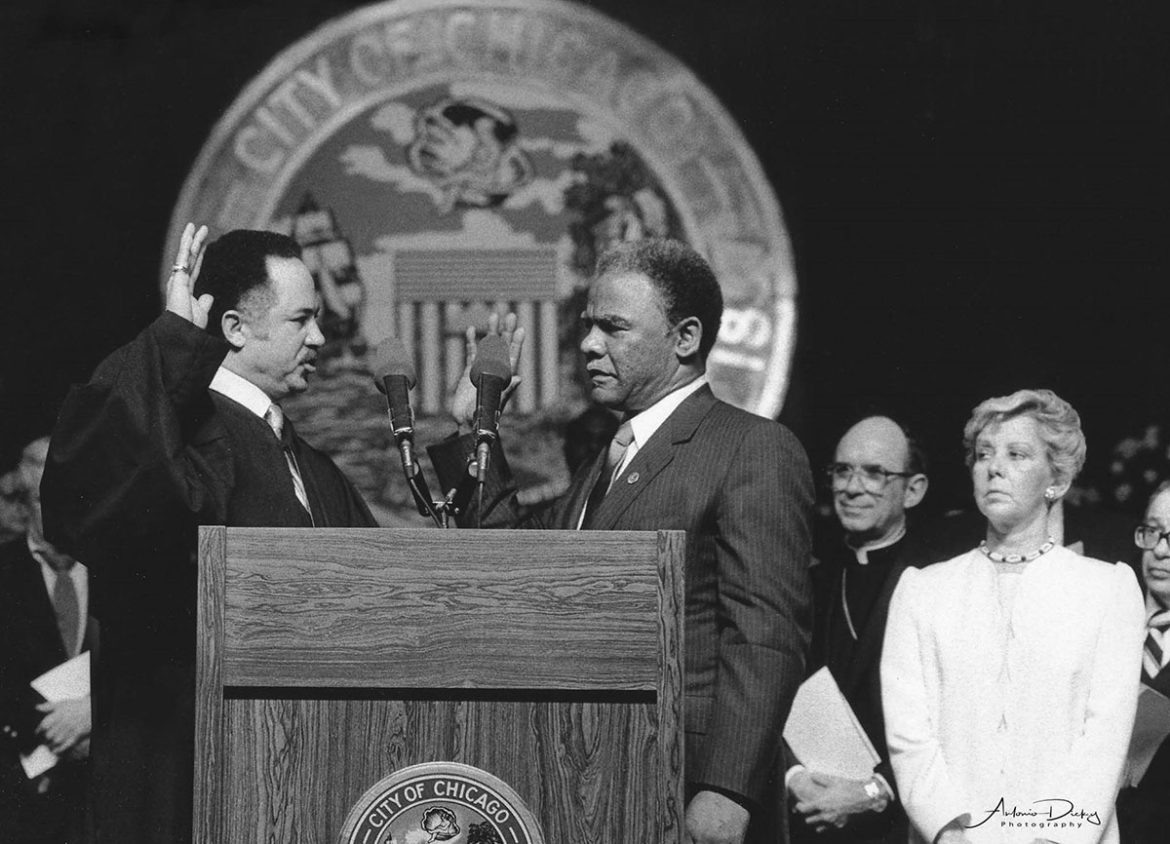 Harold Washington was inaugurated as the 41st mayor of Chicago on April 29, 1983.

Thirty-five years ago this week, Harold Washington walked into City Hall to begin his first term as mayor of Chicago. Two years later I joined him as press secretary in what would be some of the most consequential years for this city.

We all know that Harold’s sudden death on November 25, 1987 deprived his family and friends of his abundant gifts and turned the city’s political world upside down. But in the three and half decades since I’ve often wondered: what if Harold Washington and his agenda and approach to governing Chicago had survived on that chilly morning?

A short list of his priorities as he turned the corner in 1987 reflects some concerns that certainly would have shaped his next four – or eight – or more years as mayor. It might be useful to sort them and look for clues that could guide us toward a revitalized legacy.

Housing was at the top of his agenda. At the neighborhood level he had publicized his support of the white ethnic coalition, “Save Our Neighborhoods, Save Our City Coalition” (SON-SOCC) whose militants confronted the blockbuster tactics of unethical speculators. He was aware that gentrification could be a double-edged sword, dislocating public housing residents. Mayor Ed Koch hosted him on a tour of public housing in New York City, which helped to draw distinctions between low-rise livable neighborhood units versus the troubled towers lining the Dan Ryan that had come to symbolize poverty in Chicago.

The most dramatic housing issue of his brief second term was a possible takeover of the troubled Chicago Housing Authority by the US department of Housing and Urban Development. When negotiations with the HUD Secretary broke down Harold went around him by arranging a secret White House meeting with vice president George H.W. Bush, with the assistance of Jewel Lafontant, a Chicago attorney who also happened to be a black Republican. Harold’s ideas were favorably received. If he had lived to complete his housing agenda, the giant housing complexes on the south and west sides might have been resurrected, nearly two decades before Daley’s Plan for Transformation.

The HUD issue reinforced the mayor’s sense that the national arena might provide a forum for some of his immediate concerns. The former congressman was still an active member of the Congressional Black Caucus and made frequent trips to Washington, D.C. He remained an articulate critic of Reagan’s urban agenda, bringing his local-government perspective to the discourse. He was scheduled to host the annual convocation of the U.S. Conference of Mayors in 1988, and had emerged as a leader of activist mayors. His horizons extended far beyond the Chicago city limits. His intellectual energy and vision put him in a separate class from the local antagonists who were his daily fare. His expertise as a legislator as well as an executive would not only have brought federal resources to the city, they would have elevated Chicago politics.

Bossism had been the Chicago way for years, courtesy of Richard J. Daley and his imitators. Harold Washington branded Chicago with his own style and substance, an opposite approach which recognized that no one knows the “best” solution until all the voices have been heard.

Education was another high-ranking theme in 1987. CPS teachers went out on strike for 19 days, waiting for the traditional remedy: the mayor locks teachers union and Board of Ed members in a City Hall office and browbeats both sides to the limits of their endurance. Refusing to play the Boss, Harold instead convened an “education summit”  including parents and civic leaders to broaden the dialogue. The resulting Chicago School Reform Act of 1988 created LSCs (Local School Councils) and put CPS initiatives in the hands of parents and community members. It also shifted resources to schools, including state funds, and mandated school improvement plans, all of which would have encouraged the retention of families with school-age children. If he had lived to guide further improvements in CPS policies, some of today’s issues – such as school closings and creeping privatization might have been averted.

The vitality of Chicago’s neighborhoods were the trademarks of Harold’s political and social policies — and would have remained so in the years to come. As he proclaimed, “When it’s all said and done, if you can’t be secure in your own neighborhood, what kind of a city do you have?” Even before he prevailed in court and at the polls to win his legislative majority, he had succeeded in redirecting federal funds (Community Development Block Grants) and bond proceeds (refinanced general obligation bonds) to Chicago’s 50 wards on an equal basis, by direct appeal to friendly and not so friendly constituencies.

The neighborhoods, not the Loop, were the principal source of jobs, but Harold also understood that the “big-ticket items” were important, among other reasons, to forestall white flight. These items included major business development downtown, a new central library, new sports stadiums, and the McCormick Place annex, capped off by the O’Hare Airport expansion, in 1987 the world’s greatest airport expansion project.

His emphasis on fairness, including hiring and contracting for minorities, was so compelling that subsequent mayors – and CEOs in the private sector – have readily adopted his formula: 25% of city business set-asides for minorities, and an additional 5% for women-owned businesses. But as important as those metrics may be, Chicago would be a different city today not least due to the intangibles and immeasurable. And his position as an outsider independent from the Daley patronage machine might have enabled him to stop the decades of wasteful spending that left the city in the deep fiscal hole it remains in today.

He had built a team of experts and outsiders who changed the way Chicago governs itself. He brought on experts, because he did not hire cronies and ward heelers to manage the world-class city he expected Chicago to be. He brought on outsiders, because his preference was for the social and civic leaders who previously had stormed city hall clamoring for fairness, and made them his commissioners and department heads.

So, of course his most significant legacy was a practical new understanding of the role of a Chicago mayor. Bossism is the fallacy that there is one “best” solution to any problem, to be dictated and then implemented without further discussion. Bossism had been the Chicago way for years, courtesy of Richard J. Daley and his imitators. Harold Washington branded Chicago with his own style and substance, an opposite approach which recognized that no one knows the “best” solution until all the voices have been heard.  “I’m not a boss,” he said. “I sleep at night.”

Thirty-five years later, some important features of Harold’s legacy remain, but there is work ahead of us if we are to continue making the city into a place closer to Harold’s vision.

Alton Miller is an associate professor at Columbia College Chicago. He served as press secretary to Mayor Harold Washington from 1985 until the Chicago mayor’s death in 1987. He is a board member of the Community Renewal Society, the parent organization of The Chicago Reporter.