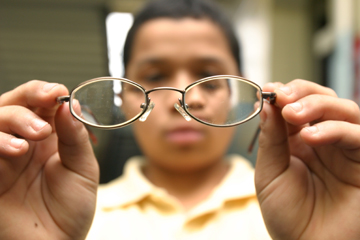 Tatyana Hopkins sits in the front row of her 5th-grade classroom at Henson Elementary in North Lawndale. But she still squints to read words on the chalkboard and sometimes asks a classmate to read them for her.

Last October, her doctor told her she needed glasses. Tatyana’s mother, Latonya Pearson, intended to take the 11-year-old to the optometrist. But she works nights six days a week sorting mail for the postal service, and is exhausted by Saturday. “I just haven’t had time to take her,” she said in early January.

Pearson figures that for now, sitting in the front row should solve her daughter’s problem, but concedes she hasn’t asked Tatyana and adds that Henson’s staff hasn’t told her otherwise.

Tatyana is one of thousands of Chicago Public Schools students who need eyeglasses but go without, undercutting both their and their teachers’ chances for classroom success.

“If I can’t see, I can’t access the learning in the classroom,” says Melissa Roderick, an associate professor at the University of Chicago, who learned about the problem through her research into student retention in CPS. “It’s a huge issue. We can’t underestimate the magnitude.”

Last year, 63,185 children failed vision screening conducted by the CPS Office of Specialized Services, but there is no data on how many students subsequently visited an optometrist. A district telephone survey of parents at 10 schools last spring suggests the number is in the tens of thousands: Just over half of the parents who were contacted said they followed up.

There are multiple reasons why students don’t always get the vision care they need: Parents don’t get the failure notices sent home with their kids. Parents don’t make appointments. Reminder calls from the district get derailed by outdated phone numbers. And many schools don’t make vision a priority.

Lack of money is typically not the problem.

Medicaid and other programs supply eyeglasses for free or at a reduced cost to those who qualify.

By February, less than a third of students who failed vision screening since the beginning of the school year had verified that they visited an optometrist, according to a Catalyst analysis of CPS data. That figure may overestimate the number of students who missed follow-up exams, since some students visit an optometrist but don’t return verification forms.

But a Catalyst survey of six elementary schools on probation (where every student is now screened) indicates that follow-up, not verification, is the problem. Four school nurses reported that parents hardly ever follow up with the eye exam; two nurses said they didn’t know.

CPS is going an extra mile on vision screening, covering most students in preschool through 9th grade. District technicians screen every child at eight of those grade levels, four more than required by the state. Only 1st, 4th, and 7th grades are bypassed unless a student is new to the district, has been referred by a teacher or is in special education. Starting this year, CPS also is screening every student at the 167 elementary schools on probation.

Every student who fails the screening is eligible for free or discount eyeglasses. Eye exams and glasses are free for those on Medicaid and for other low-income families who qualify for Sight for Students, a program administered by Prevent Blindness America. Every student is also entitled to follow-up care at a reduced price—a $30 eye exam and $60 glasses—through the Illinois College of Optometry or at Tropical Optical locations.

Each student who fails the screening gets a referral form, a list of nearby optometrists and an application form for a Sight for Students voucher.

“It’s easy for us to say a parent didn’t follow up, but if we’re relying on that little scrunched-up piece of paper in the bottom of the backpack, there can be a disconnect,” says Denise Taylor, executive director of the Chicago Campaign to Expand Community Schools. Taylor formerly ran CPS vision screening, and says schools need to get more involved in contacting parents.

Getting glasses just the first step

About every two months after the initial screenings, technicians revisit schools and check student folders to see if families followed up. If not, students are again given information to take home, in Spanish if needed.

Technicians may also attempt to telephone parents, but are often stymied by non-working phones. Last spring, the Office of Specialized Services picked 10 schools and tried to phone every parent whose child had failed a screening.

Only 26 percent had current numbers in school records.

Meanwhile, teachers, who have the most contact with parents, may not think to press them about eyeglasses—or even be aware of the problem. For example, during one Catalyst visit, a South Side elementary teacher gets impatient with a retained 3rd-grader who asks to move near the blackboard and who often misbehaves when he’s not. But one of the youngster’s previous teachers believes he needs glasses. “His eyesight is terrible,” she says.

Technicians give teachers a list of students who failed the current year’s vision screening, but the screening stretches late into the school year.

The district doesn’t require schools to track children who failed screening. However, they are forced, in effect, to check on students they want screened for special education services. “But by that time,” says one school nurse, “they may have needed glasses for two or three years.”

“Some kids, once they get glasses, their grades go up,” she adds “They don’t need to go to special ed.”

With so many other priorities and no district mandate, it’s easy to let routine tracking slide, one elementary counselor remarks. “I follow deadlines. If checking on this child’s vision isn’t a deadline …you don’t tend to get back to it.”

But getting eyeglasses to kids doesn’t always solve their vision problems: Glasses that are lost or badly broken often don’t get replaced. Sight for Students will supply only one pair of glasses a year. Medicaid will replace glasses, but many parents don’t realize it, according to a bureau chief at the Illinois Department of Public Aid.

One researcher notes that for some kids, glasses may be the least of their problems. “Glasses are a marker for much larger social problems that kids are up against,” says Katie Merrell, a health policy researcher at the National Opinion Research Center. “These kids’ lives are unorderly. The glasses might be the tip of the iceberg for other health problems.”