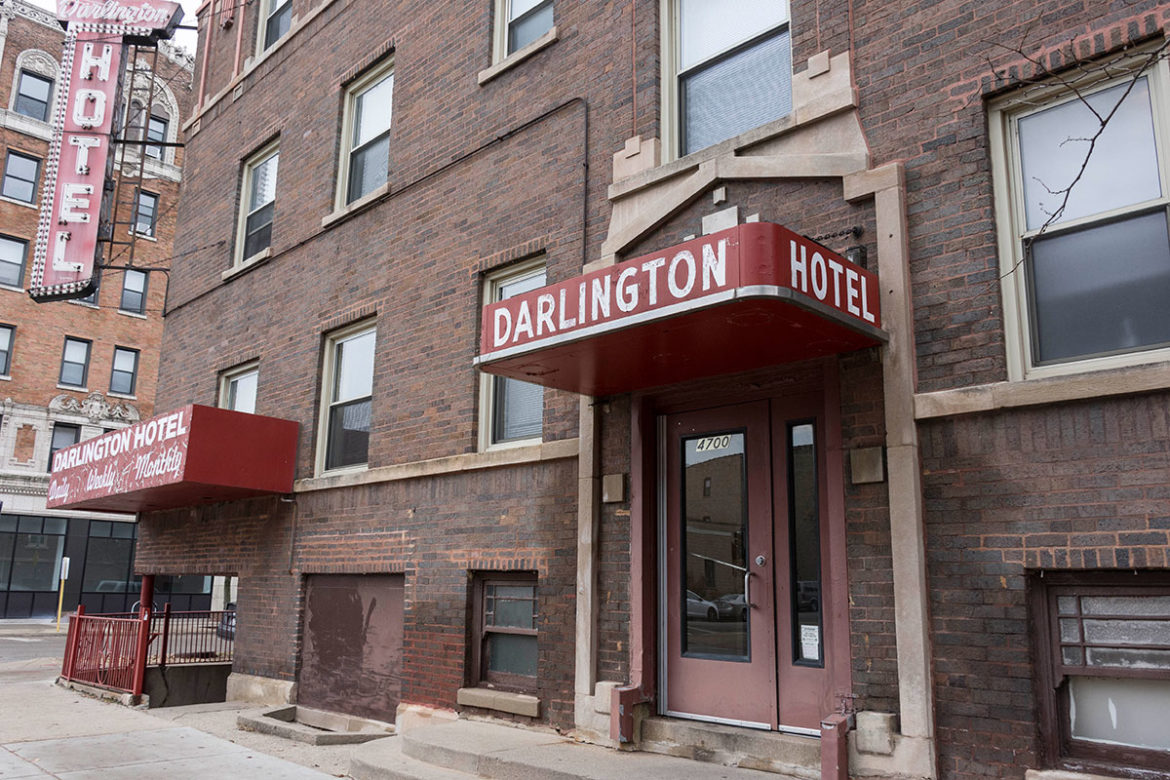 Low-income residents of the Darlington Hotel, one of few remaining single-room occupancy buildings in Uptown, face the threat of eviction as the building’s owners negotiate its sale.

So why, with winter here, are more than 100 residents of two Uptown SROs now facing possible displacement – in danger of joining scores of residents of the Wilson Men’s Hotel who lost their housing earlier this year, some of whom reportedly ended up on the streets.

Advocates say the experiences at all three properties reveal weaknesses in the ordinance as well as lack of adequate support from the city.

Tens of thousands of units of SRO housing were built to accommodate low-income workers in the early part of the 20th century. Today there are about 5,000 units remaining that serve as a safety net for people with bad credit and those who can’t come up with a security deposit or move-in fee. Many SRO residents are seniors and people with disabilities on fixed incomes.

Nonprofit developers – who typically bring on-site social services, redeveloping SROs as supportive housing – were interested buying the buildings but time and money were not on their side.

The ordinance requires owners to first give developers that would preserve the buildings as SROs six months to make an offer. After that, they have four months to sell it on the open market. If they can’t find a buyer, they have to re-register the building and begin the process again.

According to a report from Enterprise Community Partners, Interfaith Housing Development Corp. tried to negotiate the purchase of the Wilson Men’s Hotel, at 1124 W. Wilson Ave., but there wasn’t enough time to put the financing together. Financing for affordable housing is highly complex, generally involving a variety of sources. A key financing mechanism, federal Low Income Housing Tax Credits administered by the city, is highly competitive and typically requires multi-year planning.

At the Darlington Hotel, 4700 N. Racine Ave., a nonprofit developer was also interested but was unable to put financing together – not just because of the short time frame, but because the city didn’t approve tax credits or step up with other support, according to organizers at ONE Northside, which has organized tenants in the three buildings. Now developer Elmdale Partners plans to create 46 apartments out of the current 60 units, six of which will be affordable.

In the first couple of years after the SRO ordinance was passed, the city put millions of dollars toward several preservation projects, winning accolades for backing redevelopment projects at the Covent Hotel, the Mark Twain Hotel and elsewhere. But since then city dollars for preservation of at-risk SROs have dropped off dramatically, according to ONE.

While the SRO Preservation Fund was seeded by city dollars, under the ordinance its ongoing funding comes from fees paid by developers who converted SROs. But since 2014, only one development has met the requirements to pay into the fund.

City officials have said funding levels remain the same, but organizers believe they are also counting funding for rehab at existing SROs. That’s worth supporting, but with SRO residents continuing to face displacement, preservation should be a priority on its own.

ONE Northside has called on the city to set aside $25 million a year from its corporate fund for the SRO Preservation Fund. That demand is in line with other affordable housing advocates who note that support from the city’s corporate budget lags far behind other cities. Nearly all of Chicago’s budget for housing comes from federal and state funding.

Meanwhile, the Lorali Hotel, at 1039 W. Lawrence Ave., with about 100 residents, was put up for sale last year. Again, a nonprofit developer was interested but unable to complete the deal. Now, according to ONE, owner Jim Stoller says he is rehabbing the building into market-rate units, giving tenants until April to move out and verbally offering at least some of them relocation assistance. Organizers say they don’t believe Stoller is following the procedure for conversion under the SRO ordinance, including notifying the city and providing tenants with proper notice and relocation assistance.

A representative of the building’s owner responded that the city has been notified of the conversion plan and all legal requirements are being followed, that tenants have not been given a deadline to move out, and that social workers are providing relocation assistance.  The owner says the condition of the building requires a gut rehab, but he hopes it can be sold to an entity that will continue to provide affordable housing – underscoring the need for the city to step up with support for preservation.

At the Wilson, former tenant Lamont Burnett said at a ONE Northside rally at the Darlington Hotel last week, officials tasked with relocation “made promises they couldn’t keep, and we had to find housing ourselves.” Of 150 residents, “very few found adequate housing.”

If this continues, Burnett said, “we will continue to lose longstanding Uptown residents to luxury development.”

After Burnett spoke, a man identifying himself as John stepped up to the bullhorn. “I grew up in this area, I’ve lived here for 45 years,” he said. He said he works as a landscaper, and he came to the Lorali when the Wilson closed.  “I like the Lorali. It’s comfortable. It’s clean.” Now he’s in danger of losing his home again.

“I work hard like any other man or woman in this city, I pay taxes, and this is the respect that I get back for doing the right thing,” said John. “It seems with every passing day, every day, in this city it gets worse and worse for the working man or the working woman.”

That’s certainly true on the north lakefront, where 2,000 SRO units were lost in the two years before the SRO Preservation ordinance was passed – and where it appears the city is doing little to prevent the continuing loss of affordable housing today.

Editor’s note: This article has been updated to include a response from Clint Sabin, spokesperson for the owner of Lorali Hotel, and to correct an error about evictions at the Wilson Hotel.