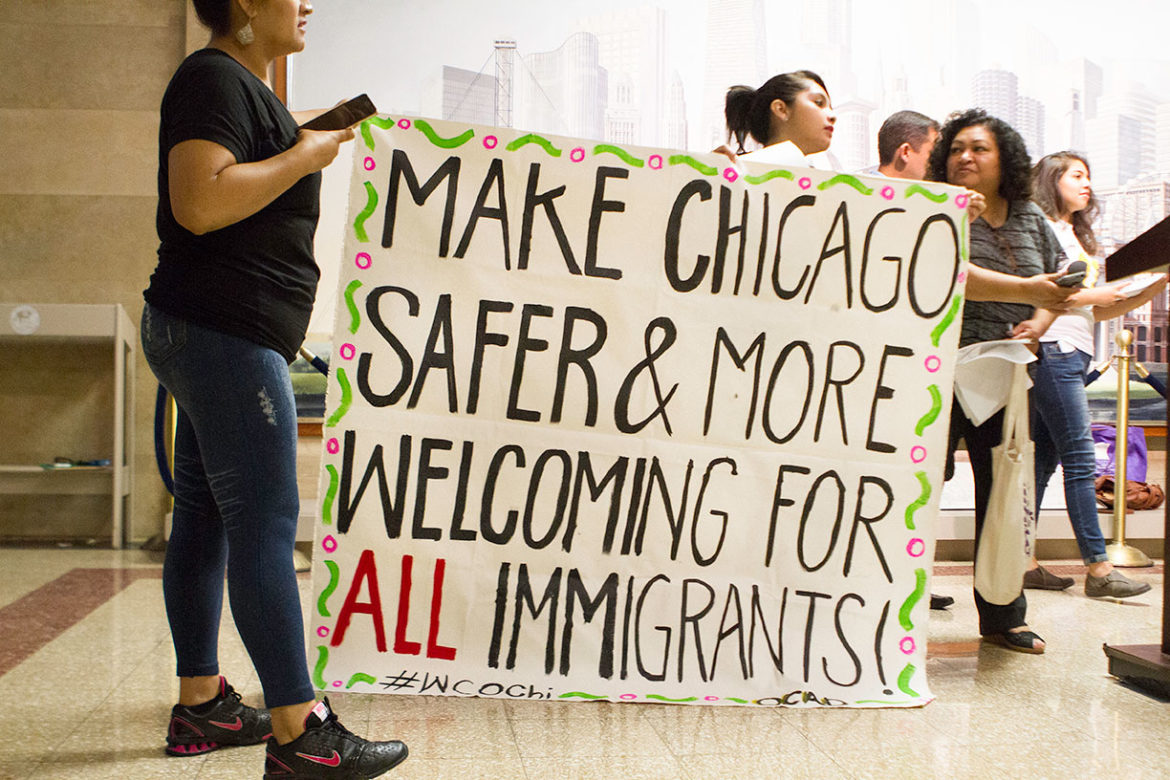 A coalition of groups and aldermen demand amending the Welcoming City ordinance so that the Chicago Police Department cannot work with immigration enforcement officials at City Hall on July 18, 2016.

Counselors at the Metropolitan Tenants Organization’s hotline occasionally hear about landlords threatening to call immigration authorities when tenants complain or ask for repairs, according to Javier Ruiz, a counselor on the group’s hotline.

But in May, a landlord actually carried out the threat. A Northwest Side couple moved out of an apartment and asked the landlord to return their security deposit. According to MTO, the landlord became irate, refused to return the deposit, and threatened to call Immigration and Customs Enforcement – and then he made the call.

ICE agents came and arrested the boyfriend, who is undocumented and had previously applied for asylum. He’s been in detention since then. It’s a horrifying outcome for two people who just asked for what they were entitled to, Ruiz said. In addition, they have yet to receive their security deposit, he said.

The man’s partner “has the right to go to small claims court to get the deposit back, but she hasn’t even considered that,” said Ruiz. “She’s just overwhelmed. She just wants to see that he gets out.”

Soon that kind of landlord retaliation will be illegal. At the end of May, the state legislature passed the Immigrant Tenant Protection Act, which bars landlords from disclosing or threatening to disclose the immigration status of tenants with the intent of harassment or intimidation. Tenants who are victimized will be able to sue for damages and a civil penalty up to $2,000.

But Chicago’s landlord-tenant ordinance still puts pressure on tenants who may be vulnerable – whether because they’re undocumented, behind on rent, or otherwise – because it puts the onus on tenants to seek repairs or other remedies. Tenants who feel insecure may be reluctant to do so.

One solution to this problem would be to have the city carry out mandatory apartment inspections. MTO and other community groups are finalizing an ordinance that would require the city’s health department to inspect all rental units in the city, on average every five years, according to John Bartlett, the group’s executive director. (The health department was chosen in part because poor housing conditions have negative health impacts.)

Owner-occupied buildings would be exempted initially. The cost could be covered by a per-unit fee paid by landlords.

An ordinance requiring apartment inspections could turn into a contest between progressives in the City Council and the powerful real estate lobby. The Immigration Protection Act is expected to become law as soon as Gov. JB Pritzker signs it.

The new law would put Illinois at odds with Trump administration priorities – particularly proposed regulations requiring local public housing authorities and private landlords providing subsidized housing to evict any family with one or more undocumented members. The new rules could affect over 100,000 families nationally, including over 50,000 children who live here legally, and add costs of verification and eviction to budgets of local housing providers.