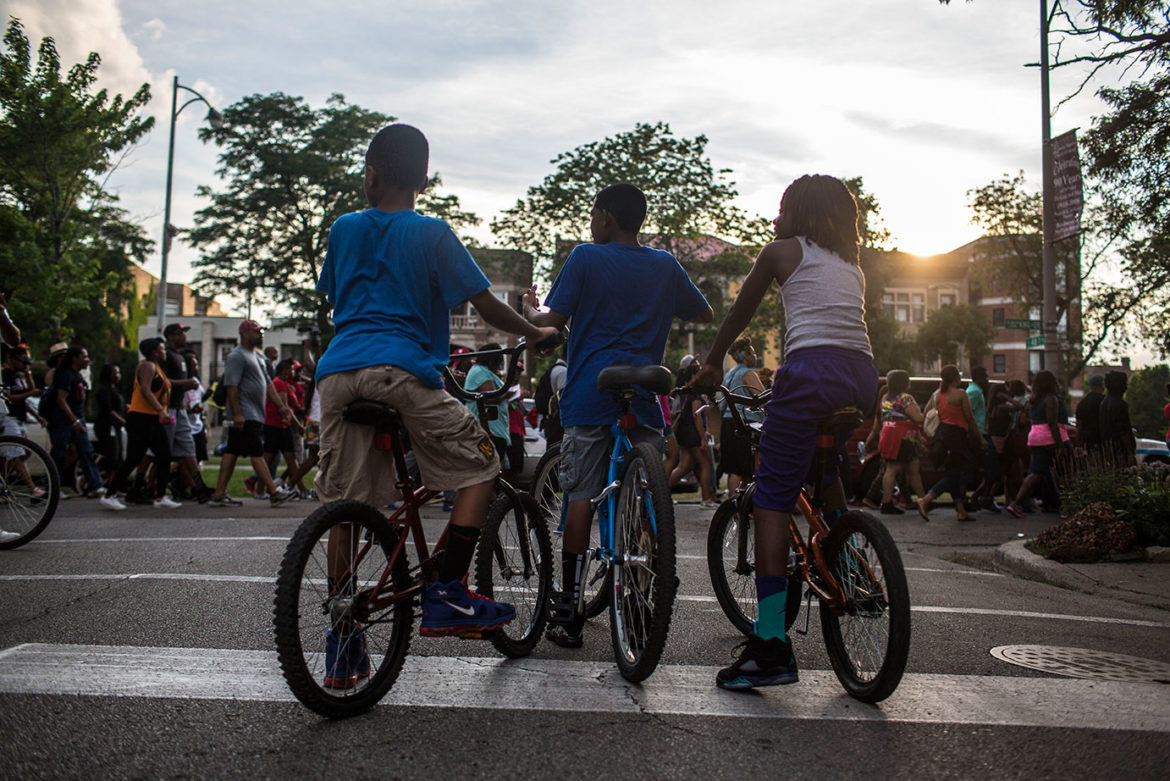 Children watch as Chicago demonstrators march in response to the July 13, 2013, acquittal of George Zimmerman for the murder of Trayvon Martin.

It has been almost four years since Chicago police officers broke into Charlene and Samuel Holly’s Roseland home and held the couple and six of their grandchildren, ages 11 months to 13 years old, at gunpoint for more than half an hour.

The officers, dressed in army-style fatigues, ordered everyone to lie on the ground, repeatedly called the children “mother-f—–s,” rummaged through the Hollys’ bedroom, questioned the 13-year-old grandson without an adult present, and strangled the family’s aging dog, Samson, according to a federal lawsuit filed in 2013.

None of the children was hurt and no one in the house was arrested. (The man police were allegedly looking for, an adult grandson of the Hollys, was sitting in a police car outside the whole time, according to the lawsuit.) But given the circumstances the children experienced, it should come as no surprise that they are still skittish when they see police officers as they walk to school or taekwondo practice.

“Now, any time they see the police, (they say), ‘Momma, there are the police!’ They’re jumping,” Charlene Holly said in an interview. “How do you tell a kid that these people are your friends and they’re there to protect you? How do you tell them not to be scared of the Chicago Police Department?”

There are no data on how often police come into contact with children or on how often those interactions are violent, but anecdotes and lawsuits suggest such incidents are not at all uncommon. And research on child trauma suggests these violent police interactions could have long-lasting negative effects on children. Yet most police officers receive little training on how to interact with children to minimize the risk of trauma.

The Hollys’ lawsuit is one of 63 police misconduct cases involving minors that were paid out for $24.6 million by the City of Chicago between 2012 and 2015, according to a Chicago Reporter analysis. Roughly one out of every 10 civil police lawsuits settled in those years involved someone under the age of 18.

The cases include three black children whom police called “cockroaches” as they searched their apartment without a warrant while their mom was at work; and a three-year-old and nine-year-old who watched as police officers shocked their pregnant mother with a Taser in a Walgreens parking lot.

Even in the best of circumstances, police interactions can be traumatic for children, according to child psychologists. All the more so if police officers are the aggressors.

The wave of public attention and scrutiny of shootings and other violent interactions between police and African-Americans has mostly focused on young black men and, to a lesser extent, black women.

But the experiences of black children—like the Holly grandchildren—who witness police violence came into sharp focus last month with the fatal shooting of Philando Castile by a police officer in Falcon Heights, Minnesota. Anyone watching the Facebook Live video of the shooting’s aftermath couldn’t help but notice the four-year-old girl in the back seat of the car, who watched the entire incident unfold and, at the end of the video, tried to console her crying mother, Castile’s fiancée.

“I thought I was going to throw up when I realized that she was there,” Cicchetti said.

Cicchetti and other child trauma specialists said there is little research on how police violence, in particular, affects children. But the effects of trauma in general on children are well-documented.

Trauma interrupts a child’s brain development, whether it is experienced first-hand or through videos or news reports, something known as vicarious trauma exposure, said Liza Suarez, co-director of the Urban Youth Trauma Center at the University of Illinois at Chicago.

“It changes your wiring,” she said. “It really impedes development when it happens at an early age.”

Children who have experienced trauma are more likely to suffer from mental health disorders, such as depression or anxiety, to display anti-social behavior, and to have trouble paying attention at school. And the effects are long-lasting: As adults, these children are more likely to abuse drugs and alcohol, to develop chronic illnesses, to attempt suicide, and to be involved in the criminal justice system.

Of course, children in under-resourced communities are more likely to experience other sources of trauma, including domestic violence, school violence, and community violence, Suarez said. But she suggested the effects of trauma could be exacerbated if an incident is perpetrated by a figure, like a police officer, whom society teaches children to trust.

“In society we expect to be taken care of by certain people and institutions,” Suarez said. “When we are hurt by those who should care for us, the effect goes beyond (that of) regular trauma. So the more the breach of the social contract, the more intense the impact can be.”

A study conducted in 2010 at UIC found that children in the child welfare system who had witnessed the arrest of someone in their home were more likely to display symptoms of post-traumatic stress disorder than other children in the system who did not witness arrests. The study controlled for other factors that might make an arrest in the home more likely—for example, drug use or domestic violence—and found that merely witnessing the arrest was itself a significant contributor to PTSD.

That study was relatively limited in scope, and there has been little additional research, experts said, because there is so little data on how often police come into contact with youth. CPD, for example, only collects data on police contact with youth if the minor is a suspect in or the victim of a crime, not if they are witnesses to an arrest or a police raid, like Charlene Holly’s grandchildren.

After the raid on their house, the Holly grandchildren received therapy. The Holly family ultimately settled its lawsuit against the City of Chicago for $95,000. But that didn’t erase the trauma of that night.

Most police officers receive little, if any, training on how children’s brains work and how that might cause them to react differently to police than an adult would.

According to a 2013 state-by-state survey of police officer training standards, police academies in the U.S. spend only one percent of training hours, on average, on youth issues. Most of that time is spent on helping police recruits understand juvenile law, not on practical skills for working with kids.

“We don’t prepare our officers very well for positive interactions with youth,” said Lisa Thurau, executive director of Strategies for Youth, a non-profit organization based in Cambridge, Massachusetts that trains police officers on how to work with youth and conducted the survey. “Many of the practices that police use, which involve intimidation or threat of force, actually increase (future) juvenile offending.”

“Policing the Teen Brain” is a Strategies for Youth training that uses role-play as part of its program to teach police officers how to bring a trauma-informed approach to their interactions with teens.

“We want them to understand that many youth behaviors are the result of trauma,” Thurau said. “Running is a traumatic response. It can look like guilt, but it isn’t. It’s trauma. It’s fear.”

Last year, Strategies for Youth created additional training materials to advise officers on how to act when making an arrest when children are present. The training, called “In the Presence of Children,” instructs officers to refrain from handcuffing a parent in front of children, to explain to children what is happening, and to ensure that arrangements are made for taking care of the children after the arrest. Four police departments, including Cleveland and Indianapolis, have received the training through a grant from the Sills Family Foundation.

CPD has not participated in either of the Strategies for Youth trainings, Thurau said. “And not for lack of trying,” she added.

CPD spokesman Frank Giancamilli said in an email that the department “regularly invites external subject matter experts, professional organizations, and families to discuss signs, symptoms and treatments for potential illness or trauma that may be helpful in responding to the specialized needs of children and minors.” But he did not name specific trainings that have focused on interactions with children or the outside experts who conducted them.

Strategies for Youth’s trainings have not been independently evaluated, in part because the organization’s efforts to apply for Justice Department funding for an outside program evaluation have been rejected, Thurau said.

Cicchetti, the child psychologist, said she thought more of this type of training is necessary because police usually are not thinking about how their actions might cause long-lasting trauma for the kids who are watching them.

To illustrate, she described a police officer responding to a domestic violence call.

In late July, about 45 officers from the Indianapolis Metropolitan Police Department took Strategies For Youth’s “In The Presence of Children” training, after Assistant Chief James Waters had seen positive results from the organization’s teen training.

“We see all too often the cycle in families, where you deal with the parents, and when the kids grow up, you see the kids,” said Waters, a 26-year veteran of the department. “I never thought much about the reason why until Strategies For Youth came along.”

He said the training taught him and his officers to think about the impact of arresting a parent in front of their child on the child’s psychological development.

“If we’re going to break that cycle, part of it is identifying opportunities to mitigate that trauma,” he said.