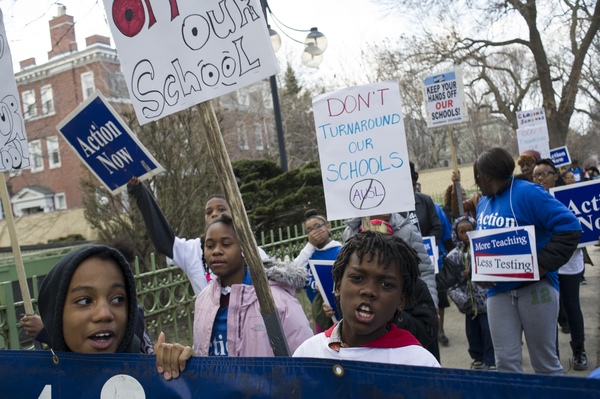 In early April, parents and students turned out for a rally and prayer vigil outside the home of School Board President David Vitale. The crowd called for the board not to approve plans to turnaround three elementary schools.

(Editor’s note: This story is an abridged version of an article from the upcoming spring issue of Catalyst In Depth, which will examine teacher retention and turnover in CPS. The issue is scheduled for publication in May. Previous issues of In Depth can be found here.)

With three proposed turnarounds scheduled for a Board of Education vote next week, Chicago Public School officials justify the move by pointing out that most turnaround schools have higher- than-average student growth on standardized tests.

Yet it has been a rocky experience for many of the 32 schools that have undergone turnarounds, a drastic action in which the entire staff must reapply for their jobs and typically, most are not rehired.  Nationally, Secretary of Education has promoted turnarounds as a key strategy for school improvement.

In CPS, however, more than half of turnaround schools are still among the lowest-performing schools. Some started badly and had to undergo another turnaround. Others have improved more than other schools, yet are still far from meeting district averages, much less the higher statewide averages.

What’s more, large chunks of the new staff—teachers who were hand-picked and spent weeks over the summer getting to know each other, becoming a team and learning how to spark improvement when the school reopened—leave within a few years.

— At 16 of the 17 schools that underwent a turnaround between 2007 and 2011, more than half of teachers hired in the first year of the turnaround left by the third year.

— Among all turnarounds, an average of two-thirds of new teachers left by year three, an attrition rate that is higher than for CPS overall—even among low-achieving, high-poverty, predominantly minority schools that typically have high turnover.

— The troubling trend has continued among newer turnarounds. In the 10 schools that were turned around last year (the 2012-2013 school year) a third of the faculty left by the start of the current school year. In comparison, only 7 percent of CPS schools have a third of teachers leave in one year.

On average, the year-over-year turnover rate in CPS is 18 percent.

CPS officials did not respond to specific questions about turnover in turnarounds. In a statement submitted via e-mail, CEO Barbara Byrd-Bennett said she understands that to retain teachers, she must set them up for “success in the classroom and support their professional growth.” The district is doing this by investing in mentoring, professional development and having teachers share best practices, according to the e-mail.

Still, the fact that turnaround schools have such low teacher retention raises questions about the effectiveness of a strategy that relies on firing and hiring an entire staff to spark improvement.

Plus, as CTU President Karen Lewis and others have pointed out on many occasions, turnarounds result in a loss of veteran black teachers, who have cultural experience with the African American neighborhoods where most turnarounds are located.

“Does not have to be the same teacher”

With large numbers of new teachers, turnarounds are already likely to have high turnover simply because young people switch jobs more often. The tendency is compounded by the inherent challenges of working in a turnaround, and the intense pressure to accomplish the difficult job of transforming a chronically low-achieving school.

Most of the district’s 32 turnaround schools are run by the non-profit Academy for Urban School Leadership, which would also run the turnarounds CPS will vote on April 23. AUSL has a specific model that, at least initially, emphasizes discipline and how the school and classrooms look, as well as the use of data to drive instruction.

Former turnaround teachers told Catalyst they felt too much emphasis was placed on the appearance of the school, too many visitors were paraded through the building and teaching was micro-managed, leaving little room for creativity.

Yet AUSL Managing Director Jarvis Sanford says he is not that worried about losing teachers. “It has never been our model that staff stay for three to five years,” he says. “We want to put the effective teachers in front of students. It does not have to be the same teacher.”

Some of the attrition happens by design, as successful principals in the AUSL network are moved to new turnarounds and take their best teachers. Sanford notes that the lauded Charlotte-Mecklenburg Schools in North Carolina have successfully used this approach.

In other cases, good teachers are encouraged to become coaches or are promoted to leadership roles within the network.

Many teachers who don’t go to other turnarounds stay within CPS, which means that Chicago students benefit from the training AUSL provides, Sanford points out.

However, Catalyst’s analysis shows that about half of the teachers who leave turnaround schools do not take jobs in any CPS school. Catalyst located several: One returned to her previous job and career as a nurse, another is now a real estate broker and a third is working as a grocery cashier.

Sanford insists that the results speak for themselves. Not only do many of the AUSL turnaround schools perform better than CPS in helping students raise their test scores, they also have better attendance. The fact that students come to school shows they are not negatively affected by having teachers leave year after year, he says.

“You may cause more harm than help”

Sanford’s stance is contrary to that of most experts, who agree that schools do better when they have a stable teaching staff.

In the 2009 report “Why Teachers Leave,” the Consortium on Chicago School Research begins with the premise that, while some turnover is to be expected, high attrition is problematic. “It can produce a range of organizational problems at schools, such as discontinuity in professional development, shortages in key subjects and loss of teacher leadership.”

Michael Hansen, senior researcher for the American Institutes for Research in Washington, D.C., says there has been surprisingly little research about whether changing the majority of a school’s staff will lead to a better school. “The strategies that are being prescribed under Arne Duncan are under-researched,” says Hansen.

One study showed that turnarounds in California improved more than schools subjected to other, less drastic action. But Hansen points out that turnarounds also get extra money to address students’ social and emotional needs, and that might be the real reason for any improvement. “There is not great data on what else is happening,” he says. “There are many moving parts going into it.”

In looking at rapidly improving schools in Florida and California, Hansen found that new teachers and veteran teachers appeared equally responsible for the positive changes.

Hansen says he would be concerned about high attrition following a turnaround. “It is possible you may cause more harm than help,” he says.

“I don’t want to lose the team”

While the management of AUSL might not think retention is important, some administrators do.

Morton Principal Peggie Burnett says that she is doing her best to hang onto the staff she inherited when she took over the school–the highest-performing AUSL turnaround–in East Garfield Park last year.

“I love my teachers,” Burnett says. “It is good for the community to keep the same teachers and also I make an investment in my teachers. We are a team and I don’t want to lose the team.”

Teachers point out that students are negatively affected by the constant churn, were sad to see them go and still call them and reach out to them on Facebook.

Lindsey Siemens, a teacher at Bradwell Elementary in South Shore, says that so many teachers have quit or moved on to other jobs that students are hyper-sensitive. Of the 35 new teachers hired in 2010 with the turnaround, only eight remain. None of the administrators are still there.

“If a teacher is absent for a few days because they are sick, the students start to wonder if they are ever coming back,” Siemens says.

She points out that this turnover is taking place in schools in high-poverty neighborhoods, where children often cope with adults coming and going from their lives.

“They experience so much loss that it is important for us to develop relationships with them,” she says.

Despite lackluster academic results at Bradwell, Siemens still believes that the turnaround process can work, but that it will only happen if the school has a stable staff for three to five years.