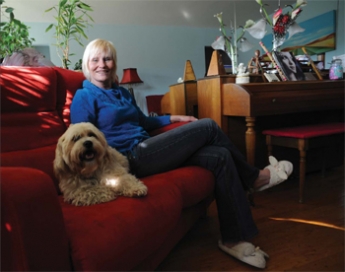 Laura Margoscin credits the Lutheran Social Services' Project SAFE program for helping her cope with her drug addiction and regain full custody of her daughter. The program's operation, along with many others in the state, was interrupted by a temporary cut in the state budget. Photo by Joe Gallo.

Eight years ago, Laura Margoscin showed up at Lutheran Social Services’ Project SAFE program with a substance-exposed child, a drinking habit she couldn’t kick and an abusive boyfriend she couldn’t leave.

During the first six months, nothing really changed. Her daughter stayed between grandparents under the watch of the Illinois Department of Children and Family Services.

Her alcoholism followed her into group meetings in the form of headaches. And her boyfriend kept giving her bruises on her face and neck.

But somewhere along the line, she began to find meaning in group book readings, meditations, writing exercises and the startlingly peppy and nonconfrontational caseworkers.

She says she found God. Then she found a way to sneak out of her boyfriend’s house and come clean to her caseworker about her inability to stay clean.

Margoscin credits Project SAFE with giving her the persistent positive reinforcement that the previous six treatment agencies she tried didn’t and helping her get back full custody of her daughter. “I feel like they saved my life,” she says.

But in the summer, Lutheran had to cut the very program that apparently saved Margoscin’s life.

In July, then-Gov. Rod Blagojevich cut $55 million from the Illinois Department of Alcoholism and Substance Abuse’s budget, which had funded specialized treatment programs for substance-abusing parents referred by DCFS to Lutheran and other agencies.

“I cannot in good conscience sign an appropriations bill that is not supported by current funding sources,” Blagojevich said at the time.

In September, the Illinois House of Representatives voted to restore the funding, and the Senate followed suit in early October. It took Blagojevich until December–” five months into the fiscal year–”to finally sign off.

Despite the budget restoration, treatment agencies statewide say that addicted patients with children in the child welfare system are still less able to receive timely drug treatment–”the lynchpin for parents who must show some progress within 12 months to be able to reclaim full custody of their children.

That’s because these agencies, which receive their funds from the Department of Alcohol and Substance Abuse, have been forced to cut interagency programs that work to reunite substance abusing parents with their children since the former governor’s initial announcement of budget cuts.

With new funding, these programs are slowly getting back on their feet–”albeit with more people waiting their turn for treatment.

With longer waiting times, more parents continue to use drugs and are less equipped to take care of the problem when a treatment bed becomes available, said Margaret Berglind, president and CEO of the Child Care Association, which links DCFS patrons to drug treatment and other services.

And their children in turn will spend more time in limbo, with neither a stable biological parent nor a permanent substitute caregiver, Berglind added. “We’re no longer able to get them out [of the child welfare system] and back to their parents in a timely way because of lack of drug treatment and substance abuse treatment available,” she said.

Sally Thoren, the Chicago community director of the Gateway Foundation, said her agency had to lay off a number of staff members, and 176 of its 500 treatment beds went unused when the cuts occurred. It has since managed to restore most of the beds, but Thoren said the series of events has likely led to more clients, with more pressing conditions. “The whole field is four months behind,” she said.

Drug addiction appears in a significant portion of child welfare cases, according to both local and national research. DCFS was unable to provide the number of clients it refers to drug treatment, but a 1998 General Accounting Office report found that 74 percent of Illinois foster children had at least one parent who was obliged to undergo drug or alcohol treatment to comply with the case plan for family reunification. During the 2004 fiscal year, the latest year for which the data are available, 9,045 DCFS clients received the Department of Alcohol and Substance Abuse treatment, according to the Illinois Alcoholism and Drug Dependency Association.

These parents are already unlikely to reunite with their children, but without treatment, their odds are “exceptionally low,” said Joe Ryan, assistant professor at the University of Illinois at Urbana- Champaign’s School of Social Work and researcher at the school’s Children and Family Research Center. When Ryan studied families under child protection with parents in substance abuse treatment, the experiment group that was more able to complete substance abuse treatment was also more likely to reunite with children.

Such findings were reasons why Lutheran and other agencies had prioritized this population with Project SAFE. According to Kathy Dwyer, associate executive director at Lutheran, an official at the Department of Alcohol and Substance Abuse contacted her agency after the governor’s cuts in July, saying that specific funding for DCFS clients could no longer be billed for. By the time the budget was eventually restored, it had already dismantled Project SAFE and laid off its band of outreach workers, who picked up clients, took their children to child care and did anything else to get the parents into treatment.

Similarly, Wendy Bailie, director of the substance abuse division at downstate Marion-based Franklin-Williamson Human Services, lost three of her four Project SAFE outreach workers when its funding for the program was cut off.

Bailie said her Project SAFE workers are “care professionals who are trained in techniques to help people stop with all the excuses of why they can’t get involved with treatment. –˜Oh, I don’t have anyone to watch my children, I don’t have any way to get there, I don’t have food.’ They help them overcome those barriers.” According to a 2006 study by the Children and Family Research Center, parents with such case workers–”or “recovery coaches”–”were more likely to complete substance abuse treatment and therefore more likely to reunite with their families.

Fifty percent of the recovery- coached parents used drug treatment within 40 days, while it took 100 days before 50 percent of parents without recovery coaches did the same.

Ryan pointed out that parents trying to reunite with their children have few other prospects. “If those services are not available, it’s not like there can be some sort of backup plan,” he said. “–˜Well, there weren’t services available for your heroin or cocaine or alcohol abuse issues, so, you can do X instead.’ That’s not going to happen–”they have no control over that.”