Chicago Teachers Union President Marilyn Stewart and former president Deborah Lynch are trading barbs on the campaign trail leading up to a rematch of the contentious 2004 race that Stewart won on a razor-thin majority.

This year’s May 18 contest comes just weeks before the current union contract expires on June 30, tossing the winner immediately into negotiations marked by rising health care costs, uncertain state funding and a continued boom in charter schools. At the same time, the union is looking to expand its reach by organizing teachers in charter schools.

So far, Lynch and Stewart have been mum about the upcoming negotiations and their priorities for a new contract. A 100-point “wish list” prepared by union delegates last year, however, calls for eliminating some of the school-related provisions negotiated by Lynch in 2003, such as 50-minute periods in high schools and a longer school day in exchange for a shorter school year. (See Catalyst, June 2006.)

The wish list includes limits on charter expansion. That goal, and a full restoration of contract bargaining rights, is on the union’s agenda in Springfield.

The campaign rhetoric has focused on nuts and bolts rather than educational reforms: administration of the union; the loss of about 4,000 union members in recent years, which has led to sharp exchanges about tenure rights and charter expansion; and rising health care costs, which Stewart says have eroded the 4 percent annual raises won by Lynch four years ago. (See sidebar)

The union’s role in education reform has surfaced in the debate over union-run Fresh Start schools, school closings and Renaissance 2010.

Nationally, the American Federation of Teachers (CTU is a local branch of the AFT) has played a less-visible role in education reform since the death of its longtime, well-known leader, Al Shanker. There’s evidence that may be changing under current President Edward McElroy, however. For one, a task force of leaders from union locals is working to come up with recommendations for the reauthorization of No Child Left Behind later this year.

Stewart sits on the AFT’s Executive Council, which sets policy direction for the union. On July 1, Stewart will also assume the paid, part-time post of secretary and treasurer for the Illinois Federation of Teachers.

Stewart has given teacher tenure top billing in her campaign, saying the decline in union membership stems partly from the loss of over 2,000 probationary teachers in recent years. Another 700 teachers are expected to lose their positions when this year’s cuts are finalized this month, a union spokesperson says.

The issue could be smoothed out in Springfield under proposed legislation that would shorten the tenure track for teachers across the state. But Chicago is not included in the current version of the bill, and the bill remains stuck in a House committee. Principals are likely to battle any changes that would infringe on their hiring freedom, saying the authority to hire and fire probationary teachers as they see fit is necessary to create a cohesive school culture.

Stewart, who wants to require principals to give clearer reasons and earlier notice before firing probationary teachers, blames Lynch’s contract for the job losses. (The contract gave teachers in Chicago Public Schools the same tenure rights as other teachers in the state, eliminating a then-common practice of keeping CPS teachers on the substitute rolls for years.)

Lynch, in turn, says Stewart should have insisted that principals and the district follow seniority rules when cutting teachers due to budget cuts.

Hiring authority, says Principal Elizabeth Gearon of Greene Elementary, fits into a districtwide push to empower principals as school leaders. Firing a probationary teacher is “not always a negative,” she adds, suggesting teachers can benefit by moving to another school that shares their teaching philosophy.

Gearon chaired a group of principals and top administrators who revamped the web-based system used to finalize probationary teacher contracts. But according to Carlos Azcoitia, principal at Spry Community Links, the changes are little more than window dressing.

“It doesn’t matter. You are going to let go of the person you want to let go,” he says. “We’re going to base the decision on the instructional quality of the teacher.”

Clarice Berry, head of the Chicago Principals and Administrators Association, offers tentative support for shortening the tenure track to three years. But, she adds, the association will be monitoring the union contract talks to ensure the new tenure-track rules remain largely intact.

The future of union-run schools has also become a political football in the election.

Lynch wants to reinstate a guarantee that CPS will not close a school for poor performance until teachers have had a chance to turn the school around. That guarantee was part of her original partnership schools agreement with CPS, but is not part of Stewart’s successor Fresh Start program. “In effect, it’s lost all its teeth,” Lynch says.

Stewart counters that Fresh Start “added teeth” by giving schools more time to show improvement—five years instead of two—and more autonomy over budgets, staffing, training and curriculum. Fresh Start has also begun a peer review process for teachers. (See Catalyst, Sept. 2005 and November 2006.) So far, Stewart has not called for a closing moratorium as part of the program.

Still, neither program required that the union take over a struggling school; teachers vote on whether to participate.

Julia Koppich, an education consultant and former education faculty member at the University of California at Berkeley, notes that such teacher-led reforms and partnership programs may not last long or have much impact.

She cites one example: In New York City, former schools Chancellor Rudy Crew joined with the union to take over low-performing schools. But current Chancellor Joel Klein later dismantled the program, even though the schools had improved.

Why? “Districts want fast changes,” says Koppich. “They’d rather close a school and start from scratch, [even though] there’s not much evidence that approach works.”

Concerned by school closings, Stewart has attacked Renaissance 2010 in press conferences and in the union magazine. But she downplays any notion of striking over closings.

In the end, however, fighting Renaissance is probably a hopeless cause, says Koppich. The mayor launched the initiative, for one, and charters, the backbone of Renaissance, “are just plain politically popular.” 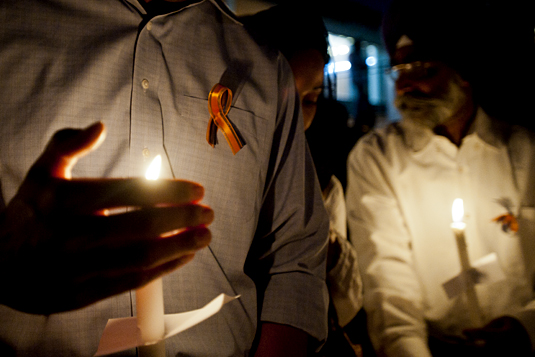 Ribbons were worn at the Sikh temple in Palatine to show respect to the victims of the Wisconsin shooting. Photo by Lucio Villa.