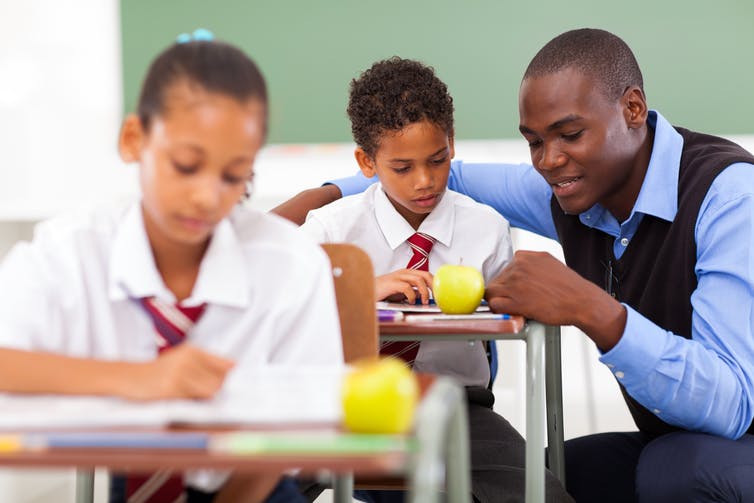 Teacher license exams often fail to predict which teachers will be the best, research shows.

Students of color seldom see teachers who look like them. This is because many aspiring teachers of color are pushed out of the profession before they have a chance to start. It’s not poor performance in college courses or teaching internships that take the biggest toll. It is the standardized tests aspiring teachers must pass to earn a teaching license.

Critics say these exams cover too narrow a slice of professional knowledge. They may also function as a culturally biased gatekeeper to the profession.

A recent report estimates that each year, the exam screens out approximately 8,600 of 16,900 aspiring teachers of color. This rate of exclusion surpasses that of white aspiring teachers by 27.5 percent. It’s not a new phenomenon, either. The trend goes back to the 1960s when states began to adopt these exams to improve the quality of teachers.

In researching my book, “Navigating Teacher Licensure Exams,” I found that aspiring teachers of color who failed their licensure exam multiple times eventually passed once they learned certain time-saving test-taking strategies, such as estimating answers instead of working out problems. They also passed by taking the exam in settings where they felt less stressed, cutting themselves off from negative messages about the exam, and concentrating on narrow slices of material that they did not know well. But I’d argue that what they did to pass the exam has little to do with what makes an effective teacher, raising questions about how useful the exams are in the first place.

Defenders of teacher licensure exams argue that they measure skills important to teaching and are “not simply a bureaucratic hurdle.” But except in the case of math teachers, teacher licensure exams have been shown to be a murky indicator of how effective an aspiring teacher will be, research has shown. This is particularly true when it comes to figuring out how good a teacher will be at teaching children how to read.

More troubling, research has shown that requiring higher scores would keep out substantial numbers of people who would otherwise be effective, but only screen out only a fraction of a percent of those who would be ineffective.

There are also problems with the exams when it comes to racial diversity. First, the accuracy of these exams can change depending on the race and gender of the test-taker and the kinds of questions asked. For example, on some exams, multiple choice questions seem to be better predictors of teacher quality for white women teachers. Conversely, essay questions appear better for African-American teachers.

Second, other factors can easily make up for a weakness that a licensure exam picks up on. For instance, racial match matters for students of color. Research has shown that for students of color, having a black teacher – despite that teacher’s poor performance on a licensure exam – can make an equivalent impact on reading and math scores as having a white teacher who performed well on the exam.

Why do state systems of education lean so confidently on these exams? A deep and abiding addiction to them.

When modern standardized tests developed in the 1920s, they were a brand new technology with much allure. They promised to sort large groups of people into neat categories so the military, immigration system and schools could make easy decisions. They gave the broader public a false sense of security, that somehow everyone has an equal chance to demonstrate intelligence. The origin of these exams, however, goes directly through the eugenics movement, a racist pseudoscience that sorts humans into crude subgroups.

Just as a growing number of colleges no longer require college entrance exams for students to be admitted, states could similarly rethink the ways they admit teachers to the profession. For instance, states could consider a range of alternatives, such as teaching demonstrations and community-based evaluations.

Dumbing down the profession?

Critics may say that moving away from these exams would dumb down the profession. But the research suggests that if less emphasis were placed on teacher license exams, more teachers of color could enter America’s classrooms and still do an effective job – regardless of what the exam might suggest.

Emery Petchauer is an associate professor in the departments of teacher education and english at Michigan State University. His areas of expertise include high-stakes tests, teacher racial diversity, English education, and urban arts -- particularly hip-hop culture.