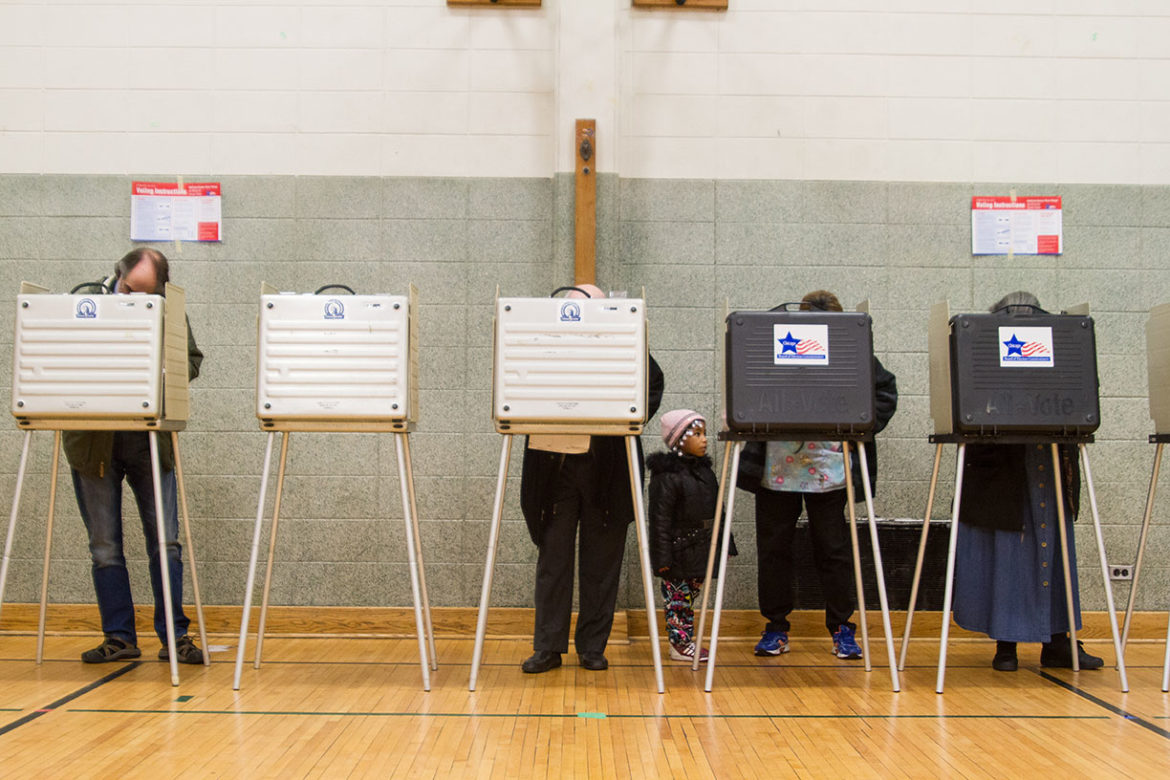 Voters fill out primary ballots at Shoesmith Elementary School in the Kenwood/Hyde Park neighborhood on March 15, 2016, the first election in Illinois where same-day registration was allowed.

Same-day registration, an initiative designed to improve ballot access, caught on in white areas of Chicago more so than black and Latino communities during last spring’s primaries.

Voters will be able to take advantage of same-day registration in Illinois on Election Day next Tuesday. The March 15 primary, however, gave us an opportunity to see same-day registration at work in Cook County, as voters chose party nominees for president, U.S. Senate, state’s attorney and other offices. This was the first election since a new Illinois law allowed voters to both register (or update their registration) and cast their ballot on the same day at their local polling place.

Given recent news on ballot access and voter suppression, particularly in communities of color, the Reporter decided to take a closer look at registration patterns to see how same-day registration may affect black and Latino voters here in Chicago.

Election Board records show 26,542 Chicagoans registered and voted on March 15. This amounts to nearly 3.3 percent of votes cast in the primary, which seems to confirm that the strategy encourages political participation.

But who benefited the most?

During the March 15 primaries, the highest concentrations of same-day registrations (denoted by darker purple shades) took place on the city’s North and Northwest Sides.

We can’t answer that question directly because voter registration records don’t include data on race. But we can make an inference using ward and precinct information for each voter, combined with Census data on the racial makeup of each ward. (Each of Chicago’s 50 wards is divided into a few dozen precincts for voting purposes.)

Mapping this data geographically, we found the highest concentrations of same-day registrants on the North and Northwest Sides. Those areas are generally whiter and wealthier than the citywide average.

In fact, among the 10 wards with the most registrants on primary day, only one (the 4th) is majority black. Another (the 25th) is majority Latino. A third (the 49th) is mixed, with no racial majority. The remaining seven wards, including the top four, were mostly white. You can download complete ward-level data compiled by the Reporter.

Race is a significant factor in ballot access. Proponents say same-day registration “assists geographically mobile, lower-income citizens, young voters and voters of color.” An expert’s report filed in the lawsuit over North Carolina’s voting restrictions (which were recently overturned ) cited studies that “found a large and positive effect on turnout among African Americans, when compared to Whites, and after controlling for education, income, and employment status.”

This year’s primary featured a number of hotly contested races that drove turnout to nearly 54 percent citywide. Still, it may be too soon to say whether same-day registration is getting the expected traction across Chicago, particularly on the predominantly black South Side.

“Same-day registration is an important safety net for all voters,” said Marissa Liebling, an Illinois attorney and legislative director for Project Vote, a D.C.-based non-profit that works on legal efforts around registration issues. “It means that no one is disenfranchised due to an administrative error or just because of a missed deadline.”

A federal appeals court is reviewing the GOP-led challenge to Illinois’s same-day registration law, but won’t make a ruling until after the Nov. 8 election.