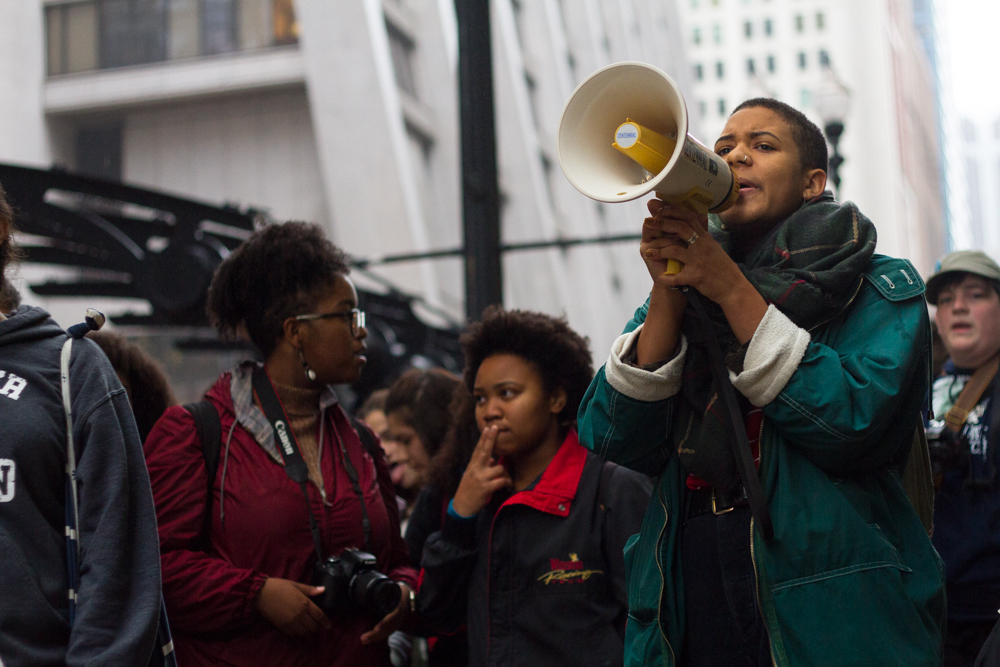 In October 2015, students led protests against budget cuts in CPS. At the megaphone is Stella Binon, who called for more state funding for schools.

Chicago Public Schools officials say they’re not waiting for pension relief from Springfield and are now telling principals to plan for an average 26 percent budget cut for the upcoming school year, a move that would lead to thousands of teacher layoffs and increased class sizes.

The announcement, made to a small group of school leaders this morning, comes a day after the state’s Secretary of Education Beth Purvis penned an op-ed in the Chicago Tribune saying that she could not “in good conscience” recommend a change to the state’s funding formula for schools that would include special set-asides for the beleaguered CPS.

District officials announced 39 percent cuts in so-called student-based budgeting, for a total loss of some $700 million. CPS faces a $1 billion deficit. Student-based budgeting accounts for the vast majority of money sent to schools. Under the cuts, schools will get $2,547 for each student in the middle grades, down from the current $4,176, according to Catalyst calculations based on data from cuts made in February. (Late Tuesday evening, district officials provided slightly lower figures showing that student-based funding would drop to $2,495 from $4,088.)

Charter schools, which have also been bracing for massive cuts, will see “an equivalent cut.” Overall, taking into account additional money from sources including federal and state poverty grants, schools would see average cuts of about 26 percent, district officials said.

But there isn’t much left to cut. After a series of mid-year reductions, schools are down to the bone with “no fat to be trimmed,” said Northside College Prep Principal Kelly Mest. Her school stands to lose at least $1 million if the budget cuts materialize, she estimated.

“We are very creative, but I don’t know if there is enough creativity in the world for this. At this point it’s a matter of our community coming together and demanding fair funding. Because I don’t think anyone could look at this and call it fair,” she said, her voice full of emotion.

She was one of 15 principals invited to the meeting with CPS this morning to ask questions and provide feedback on “mitigation” strategies that could be used to cut costs, like sharing resources between schools.

In a statement, CPS spokeswoman Emily Bittner said the district has involved principals “earlier than ever” in the budget process and is working with “example schools” to understand the potential impact.

“Even as we continue to seek equal funding in Springfield, we must continue to plan for the worst – higher class sizes, loss of enrichment activities, and layoffs of teachers and support staff,” she said.

District officials did not release school-level data on the cuts.

Enrollment projections were not released either, though the district has continued to lose students in recent years. One principal of a more affluent elementary school has told Catalyst she worries about families exiting the public school system due to the budget uncertainty.

The early warning to principals comes in stark contrast to last summer’s budget roll-out. CPS officials then approved a budget that depended on $500 million in state aid that never materialized, and were then forced to hack away at schools’ budgets throughout the school year.

Not all principals were convinced that the announced cuts will become reality. “I think it’s a scare tactic,” said one principal, who heard about the cuts but hasn’t seen an actual budget document. “Why didn’t we get our real budgets? This is to scare Springfield into doing something.”

Meanwhile, contract negotiations between the district and the Chicago Teachers Union have been stalled for months. CTU officials did not immediately respond to a request for comment on the potential cuts and layoffs.