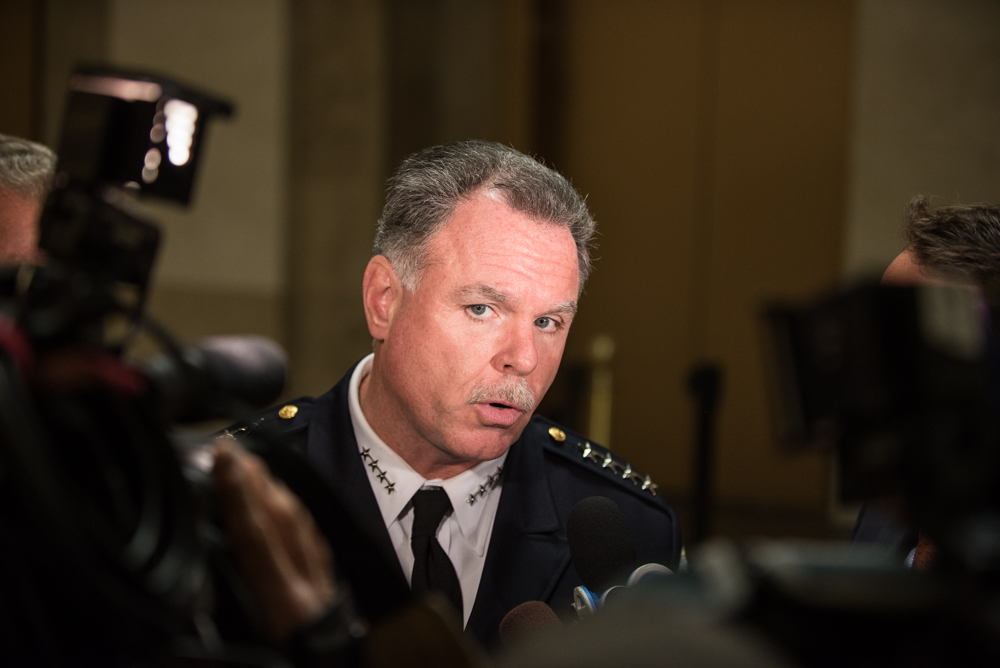 Parts of a toddler’s dismembered body discovered in Garfield Park. A teenage boy shot in the head in North Kenwood. A grandmother and her pregnant daughter shot to death in Back of the Yards, her infant grandson wounded.

The stories of violence in Chicago’s black communities—heartbreaking, gruesome and surreal—have added up with frightening regularity. Last month marked the city’s most violent September in a decade.

That fact—at least, in part—led members of the City Council’s Black Caucus to take aim at Chicago police Supt. Garry McCarthy at a budget committee meeting Tuesday, a day after calling for his firing at a hastily prepared City Hall news conference.

“Unfortunately, my ward and my community are not getting safer,” said Ald. Emma Mitts (37th), whose ward covers parts of Austin and Garfield Park. “I can’t place the blame on the officers for giving their lives in service, nor can I place the blame on their immediate supervisors, who are merely following orders from the command. But I do place the blame, superintendent, on the overall strategies coming out of the Chicago Police Department. I put this blame on your shoulders.”

At the same meeting, white aldermen representing the city’s North Side were mostly deferential to McCarthy and largely expressed their gratitude for his leadership, exposing a broader disconnect between the experience of Chicago’s white and black residents.

Ald. Brendan Reilly (42nd), who noted that McCarthy is a “voting constituent” of his ward, which covers the Loop and Near North Side, thanked the superintendent for his hard work.

“Yours is one of the most difficult jobs in the City of Chicago, and we just want to make sure that you’ve got the resources that you need to complete the mission,” he said.

Citywide, there have been 361 murders so far this year, McCarthy said, up 64 from the same time last year.

Ten of Chicago’s 22 police districts have seen more murders through the end of September than they did in all of 2014, according to CPD. The districts are spread across the city, but the communities that have seen the most violence continue to be primarily black neighborhoods on the South and West Sides.

North Lawndale has seen 22 murders so far in 2015, twice as many as all of last year, according to data collected by the Chicago Tribune.

Ald. Jason Ervin (28th), a member of the Black Caucus who represents part of North Lawndale and West Garfield Park, expressed frustration that every time McCarthy comes before the council, the conversation seems to be the same.

“Our respective communities have endured long and hard. [But] the same items we discussed in 2011 are the same items we’re discussing going into 2016,” he said. “I hope that next year, if both of us are still here, that we won’t have to continue in the same conversation.” Ervin tried to turn attention away from the issue of gun violence and toward the “quality of life” issues that he said he hears most about from residents. He pointed in particular to the continued heroin trade on the West Side, which led to 75 overdoses in 72 hours last week.

For his part, McCarthy continued to point to lax gun laws as the main driver of violent crime, passing off accountability onto the state legislature for not increasing sentences for gun possession. He said Chicago police seize seven times as many guns as police in New York City, despite the fact that the population is one-third the size.

“We can create a better functioning police department, but if there’s nothing happening  when we seize those guns, don’t expect it to change,” he said. “We’re drinking from a fire hose.”

Throughout the hearing, McCarthy and the members of the Black Caucus seemed to be talking past each other.

In response to McCarthy’s pleas about gun laws, Ald. Carrie Austin (34th), who chairs the budget committee, pressed McCarthy to tell the council “not all the statistics that you just said, [but] tell us what we can do to rid our communities of all this violence.”

“Let’s get on buses and go to Springfield,” McCarthy responded, to Austin’s visible dissatisfaction.

Sometimes McCarthy met the long monologues of several black alderman with silence; other times he responded, a level of defeat in his voice.

“I want to make clear that I share everybody’s frustration in this room,” he said. “Nobody is more frustrated about gun violence than me.”

“When crime was down, it was because of your strategic plan, everything that you put in place,” Beale said. “Now that crime is up, you’re saying that it’s weak laws on the books. I believe that it’s still your plan that is failing the residents of the city of Chicago.”